The Color of Recession 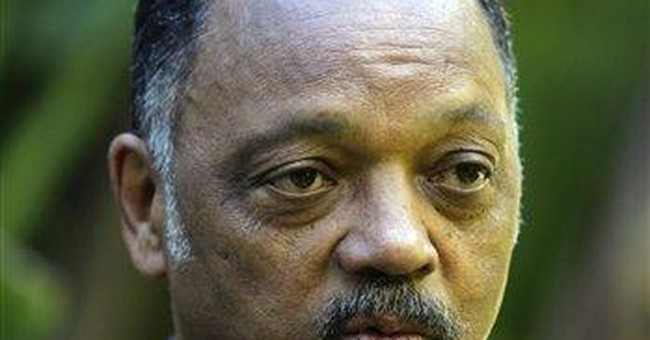 If Jesse Jackson is mad at Barack Obama, the president must be doing something right. Jackson complained this week that President Obama wasn't doing enough to help blacks in a recession that has disproportionately affected black workers. Jackson's major beef, however, seems to be that he was not invited to the White House job summit earlier this month. Join the crowd. The White House didn't invite anyone from the Chamber of Commerce or the National Federation of Independent Businesses either, instead choosing labor union bosses and CEOs that are already reliably in Democratic ranks.

Jackson and black leaders in Congress are becoming increasingly unhappy with President Obama over his failure to play the race card during the recession. In early December, members of the Black Congressional Caucus boycotted a vote in the House Financial Services Committee to express their anger that their colleagues and the White House have not targeted assistance on helping blacks during this recession.

I have been very critical of the president on his economic policies, which I think have slowed job creation and threaten to prolong the recession. But in this instance, he is absolutely right. The idea that we need racial quotas or preferences in targeting economic assistance would not only be a disaster as economic policy, it would be unconstitutional. The government has no business directing its aid on the basis of skin color.

It is true that blacks and Latinos have higher unemployment rates than whites, but that is true in good economies as well as bad. The current unemployment rate for blacks is 15.6 percent, 12.7 percent for Hispanics, and 9.3 percent for whites. But the difference between the groups is a reflection of lower skills among black and Hispanic workers -- and low-skilled workers are the first to lose their jobs during a recession. There's been no discriminatory policy to lay off jobs for blacks and Latinos, and there should be no target assistance based on race.

I recently debated Jackson on race and the recession at Washington, D.C.'s Newseum. It was obvious during our debate that Jackson still lives in an America of the 1950s and 1960s when racial discrimination was the single biggest problem facing black America. In the bad old days of segregation and Jim Crow, blacks faced obstacles they could not overcome no matter how well prepared or qualified they were. Employers could choose, with impunity, to pass over blacks if their prejudices dictated.

But we are now two generations removed from the era of pervasive racial discrimination. We now have laws that not only forbid such discrimination -- and punish transgressors heavily -- but encourage employers to take "affirmative action" to ensure that black, Hispanics, and women can compete. Unfortunately, those laws have been turned on their head. The problem now is not that we do too little to help blacks and Hispanics, but that we actually practice reverse discrimination in order to ensure "diversity" in college admissions, employment, and public contracting.

The election of Barack Obama to the highest job in the land is proof enough that we no longer live in an America where racism runs rampant. But for Jesse Jackson and many of the black leaders of his generation, this is not good news. They have made careers out of playing the race card on every issue -- and the gig is now up.

There aren't many areas in which I agree with President Obama, but so long as he repeats the message "There is not a black America and a white America ... but the United States of America," we should welcome it.