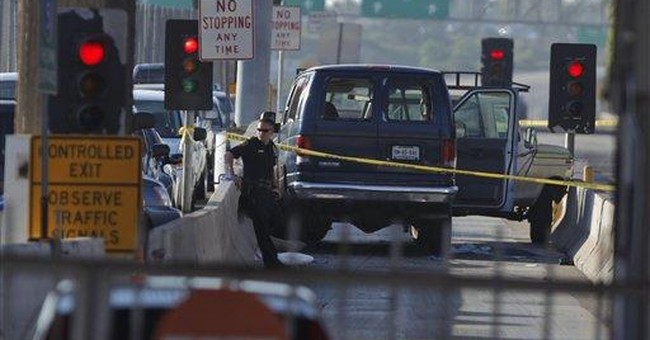 For the first time in decades, the number of foreign-born individuals living in the United States declined last year, according to new numbers released by the Census Bureau's American Community Survey. The drop was small, from 12.6 percent of the U.S. population to 12.5 percent of the population, but it is significant nonetheless. It suggests that not only are fewer people coming here but also some who are already here have decided to leave. But the reason for the decline may be nothing to cheer about. It may have less to do with tougher border enforcement effectively keeping out illegal immigrants than it does with a shrinking economy making the country a less enticing destination.

Immigrants always have been the canaries in the mine shaft -- an early warning system about the health of the U.S. economy. By mid-decade, informal networks of immigrants in the U.S. had already begun to send word-of-mouth messages back home that job opportunities in the U.S. were drying up. As a result, immigration from Mexico -- the country responsible for about a third of all immigration to the U.S. -- began a steep decline and is now down overall by about 40 percent. And according to estimates from Mexico's National Survey of Employment and Occupation, Mexicans have been returning home at a rate of more than 400,000 a year since 2006, at the very time that fewer Mexicans have been choosing to leave Mexico for the U.S.

But what about those who remain? The greatest passion generated during immigration debates over the past few years has concerned illegal immigration, but many people also have voiced fears that Hispanic immigrants, even those who came legally, are somehow different from all previous immigrants and never will move into the American mainstream. The Heritage Foundation's Robert Rector, for example, warned in one study that the descendants of Mexican immigrants will constitute a permanent underclass, dependent on welfare and unable to carry their fair share of the tax burden, discouraging lawmakers from considering changes to immigration law that would allow more Mexicans to immigrate, even if they were to do so legally.

A recent study by the Pew Hispanic Center, however, suggests that many of these fears are overblown and that children of Latino immigrants are doing well on most measures. They fare better on most health indicators (except obesity) than native-born Americans, for example, despite being less likely to be covered by health insurance. Most importantly, they are about as likely to grow up in two-parent households as whites -- 73 percent, compared with 77 percent for whites. They graduate high school at rates slightly less than non-Hispanic whites (80 percent, compared with 92 percent of whites), but almost half go on to attend college. And those who graduate from college actually earn slightly more than their native-born counterparts.

The overwhelming majority of Hispanics born in the U.S. to immigrant parents are able to speak English well, which is key to their successful integration into American society. While the Census Bureau counts many Hispanic immigrants as linguistically isolated -- unable to speak English well enough to function in daily life -- they aren't unique in that respect. In fact, Asian immigrants are slightly more linguistically isolated than Latinos. Yet few people seem to fret that Asians never will assimilate.

Contrary to the impression that Hispanics remain poor no matter how long they've lived in the U.S., upward mobility is still the rule, not the exception. Twice as many third-generation Hispanics live in households with incomes more than $75,000 a year (nearly one-third of all third-generation Hispanics do so) than live in households with incomes less than $25,000 a year.

The one worrisome trend among American-born Hispanics is the same demographic trend that plagues African-Americans and growing numbers of poor whites: rising out-of-wedlock births and an increasing number of children who grow up in female-headed households. "Third-generation" (which means third-generation or higher) Hispanics are far more likely than those of the first or second generation to grow up in households headed by unmarried mothers, with a majority, 52 percent, of such children growing up in homes without their fathers present. Assimilation, unfortunately, includes adopting more lax attitudes toward sex and childbearing outside marriage, and the surest way to remain poor is to have a baby before you're married.

But it's difficult to blame this trend on immigration. Most of those we call "third-generation" Hispanics aren't even the grandchildren of immigrants but are made up mostly of Mexican-Americans whose families have been here for generations. Indeed, immigrant family values may be exactly what all Americans -- Hispanic and non-Hispanic alike -- need more of, not less.