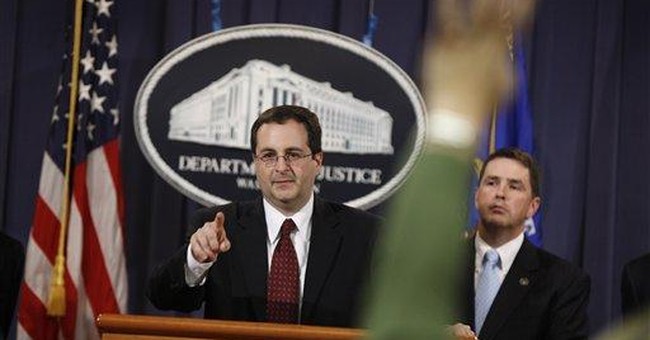 Trending
When it comes to politicians' foibles and faux pas, the mainstream media's double standard is nothing new, but the Washington Post's recent coverage of the Virginia governor's race takes the cake. Republican gubernatorial candidate and current State Attorney General Bob McDonnell has been trouncing his Democratic opponent, State Sen. Creigh Deeds, in the polls for much of the campaign. So the Post has now dredged up a 20-year-old academic paper McDonnell wrote for a conservative Christian college in which he condemns homosexual behavior, criticizes feminism for being anti-family, and questions the effect on the family of the mass movement of women into the workforce.
CARTOONS | AF Branco
View Cartoon

McDonnell says he's changed his mind on some of the issues he wrote about when he was seeking a public policy degree -- especially on women in the workforce -- and his record as a state legislator and attorney general doesn't suggest he's ever used his office to punish gays, working women or feminists. But the Post is having none of it. In a particularly snotty piece, editorial writer Ruth Marcus complains that McDonnell can't "explain away" his views, noting "(t)here are so many delicious aspects to the McDonnell uproar."

Funny, the Post was not nearly as eager to make an issue of 2006 Democratic senate candidate (now U.S. senator) Jim Webb's past writings. A search of Post archives found exactly one article in which the Post mentioned that Webb had written novels between 1978 and 2001 depicting, among many other salacious scenes, a father performing a sex act on his young son. And the news headline blamed Webb's Republican opponent, Sen. George Allen, for making the subject newsworthy in the first place: "Allen Blasts Webb Novels for Sex Scenes; Veteran Says Works Reflect Trauma of War." The article goes on to explain: "Webb's books, including 'Lost Soldiers,' 'Something to Die For,' and 'Fields of Fire,' are historical novels that describe wartime horrors in Vietnam and people dealing with the aftermath of combat," adding, helpfully, "Webb is a decorated Marine who served in Vietnam."

Nor was the Post nearly as aggressively critical of Webb's views on women in the military, summed up in a 1979 Washingtonian magazine article entitled "Women Can't Fight," as it has been of McDonnell's 1989 views on women, gays or marriage. Although the Post mentioned the magazine piece during its 2006 reporting on the election, the newspaper also noted, "Webb has said he opened as many as 18,000 assignments for women, the largest number in Navy history," and gave prominent coverage to Webb's endorsement by Hillary Clinton and other notable Democratic women. The Post has granted no similar caveats to McDonnell.

The Post's kid glove treatment of Webb played an important role in his ultimate election in 2006. And it was particularly egregious given the way they went after Webb's opponent George Allen for having uttered a nonsensical phrase during a campaign stop, referring to a Democratic opposition researcher who had been videotaping Allen on the campaign trail as "macaca." The Post alleged -- unconvincingly, in my view -- that the term was a racial epithet, driving Allen's campaign into a tailspin from which it never recovered.

Maybe the Post hopes its coverage will have the same effect this time around. No wonder so many Americans mistrust the media.