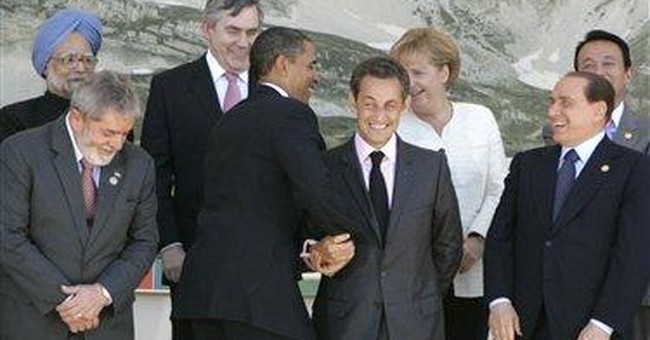 When will the failing U.S. economy become President Obama's problem? To date, the president seems immune to criticism of his handling of the economy, except from conservatives. Job losses continue to mount, despite his promises that his "stimulus" plan would create jobs and stop rising unemployment. The housing market shows no sign of imminent recovery, with prices continuing to decline and more homeowners falling behind on their payments. Retail sales fell again in June, with even value stores like Costco experiencing drops in sales. And the federal debt has risen under President Obama to its highest level as a percentage of gross domestic product since the U.S. was coping with the debt incurred in World War II.

Meanwhile the president went off to Russia to negotiate dubious arms agreements while administration officials back home plotted the nationalization of one of the largest sectors of the U.S. economy: the health system.

In January, the Obama team said that unemployment would level off at about 8 percent with the passage of a nearly trillion-dollar stimulus plan. The stimulus package was supposed to create 1-3 million new jobs -- but to date even the White House claims only 150,000 jobs have been created or saved by their profligate spending. Let's see, the math on that works out to about $5 million per job.

It's not even clear that the paltry 150,000 jobs are real. Unemployment figures show that nearly 2 million people have lost jobs since the stimulus plan took effect. The White House calculations depend on a formula used to predict job creation based on government spending and tax cuts, but the formula doesn't actually count jobs. But even if you accept the Obama administration's claims, a disproportionate number of those jobs appear to have gone to Obama's union allies: namely, the teachers unions, autoworkers, and state and local public employees. But, not to worry, the administration now says that by August 750,000 jobs will have been created or saved by mortgaging America's future.

The liberal Urban Institute and Brookings Institution estimate that by 2011, the federal debt will equal GDP for the nation. Liberals love to talk about the Reagan-era arms buildup and how it increased national debt. But during the Reagan era, debt as a proportion of GDP averaged about 43 percent of GDP. Given the failure of the Obama plans so far, there is no way that we can grow our way out of this crushing debt burden, which means our children and grandchildren can expect a substantially lower standard of living.

This is a remarkable turn of events. Obama is not entirely to blame -- but he shows absolutely no idea how to get us out of the mess we're in. Instead, he offers only more government spending on borrowed money, as if that were the path to real growth. Sooner or later, the public will catch on. Obama's popularity is already starting to slip. The latest Gallup tracking poll puts his overall approval at 56 percent, down from a high of about 70 percent when he took office. But a breakdown of his support among different demographic groups in the Gallup polls shows that he's down below 50 percent approval among those who identify themselves as "pure Independent" and among regular church-goers, and at 52 and 54 percent approval, respectively, among whites and persons who are married.

The Rasmussen Reports daily tracking polls now show that more Americans strongly disapprove of President Obama's job performance than approve: 38 percent to 30 percent. And on his handling of the economy, an even higher percentage of Americans give President Obama low marks: 43 percent. Obama is beginning to show weakness among men, a perennial disability for Democrats. Nearly half of all men, 46 percent, now strongly disapprove of the job the president is doing. Nonetheless, even Rasmussen, which has generally showed lower approval for Obama, indicates that a slight majority of Americans, 51 percent, at least somewhat approve of Obama's job performance.

Gallup estimates that most recent presidents have enjoyed an average seven-month honeymoon. Obama's grace period is about to end -- maybe then he'll be held accountable for how badly he's set back the economic recovery.