Hoist on Their Own Petard 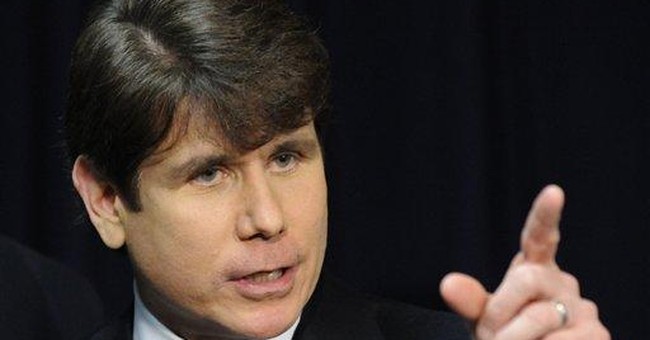 Rod Blagojevich may look like one of the dim bulbs from Tony Soprano's Bada Bing, but the guy's a political genius. Who could imagine that a month after U.S. Attorney Patrick Fitzgerald signaled that the Illinois governor was about to be indicted for trying to sell President-elect Barack Obama's Senate seat, the man would not only remain un-indicted and un-impeached, but he'd manage to make the entire Democratic congressional leadership look like chumps? In naming former Illinois Attorney General Roland Burris to the vacant seat, Blagojevich has hoist the Dems on their own petard.

Blagojevich knew exactly what he was doing by naming Burris. Like any urban Democrat, the governor knew how potent an advantage Burris' race would be. Blacks may be only 15 percent of the Illinois population, but they represent about half of the Democratic Party's base in the state. And nationally, the figures are just as skewed.

By appointing Burris, Blagojevich was daring the Dems to bar the Senate door. He knew he could count on the likes of Congressman and former Black Panther Bobby Rush to make invidious comparisons between Senate Majority Leader Harry Reid's initial opposition to seating Burris with former Alabama Gov. George Wallace's blocking the schoolhouse door after the Supreme Court ordered public schools desegregated.

With Obama's elevation to president, Senate Democrat ranks are as white as Republicans'. And no matter how many times Reid et al say their opposition to Burris has nothing to do with race, the whole issue makes them squirm a bit. After all, Democrats have been perfectly happy to force police departments, businesses and colleges to select applicants by color, but they seem less happy to apply those same standards to themselves when it comes to joining the most exclusive club in the world.

Of course it's absurd to think the Democrats don't want Burris because he's black. But then schools that fail to admit less-qualified blacks, or businesses that don't hire a proportional share of black employees, or police departments that pass over a lower-scoring black applicant in order to promote a higher-scoring white one aren't engaging in racial discrimination either. Yet Democrats have insisted for decades that racial justice somehow required racial parity in all aspects of life. But they don't want the same absurd rule applied to them.

Democrats may have no choice in ultimately seating Burris. Just hours after the Senate sergeant-at-arms summarily rejected Burris from taking his seat, Sen. Reid and others seemed on the verge of changing their minds. Leader Reid's description of Burris had changed from dismissive to complimentary: "He obviously is a very engaging, extremely nice man. He presents himself very well. He's very proud of his family. He's got two Ph.D.s and two law degrees, and he talked about how proud he was having those degrees."

But even if the congressional leadership doesn't cave, Burris is virtually a sure bet to win a challenge in court. Like it or not, Rod Blagojevich is still a sitting governor with the power under Illinois law to appoint a replacement to fill President-elect Obama's now empty seat. The Democrats in the state legislature had their chance to impeach the man -- and they chose not to act quickly.

The entire episode is a huge embarrassment to the Democrats, including the incoming Democratic president. How ironic that Barack Obama is now saddled with party leaders who are accused of acting like racists. Democrats have rarely minded when the R-word was hurled at Republicans, but when the shoe is on the other foot, it hurts.

And that may be Blagojevich's sweetest revenge. The fellow may be a foul-mouthed, larcenous creep, but he knows exactly how to yank his fellow Democrats' chains. Blagojevich may eventually be forced from office -- and he may well end up behind bars -- but he's going to inflict maximum pain on his fellow Democrats before he leaves the stage.