A Tale of Two Lies 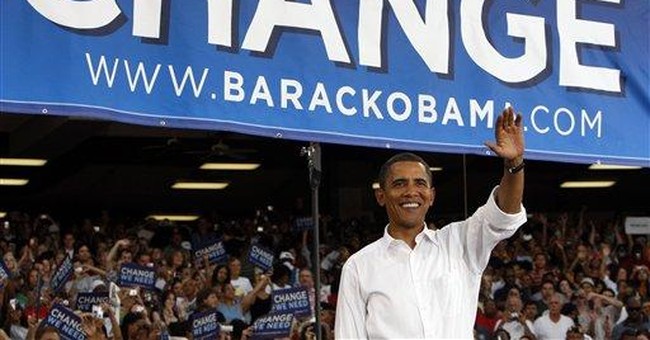 The media have been raking John McCain over the coals the last couple of weeks, accusing the GOP presidential nominee of being dishonest or even lying in his campaign ads. They're especially angry about an ad the McCain campaign has been running, which accused Barack Obama of supporting a bill when he was a state legislator that mandated comprehensive sex education for children in kindergarten in Illinois. A look at the actual language of the bill Obama supported proves the ad was no lie -- but the media couldn't be bothered to actually check the record.

This week the tables were turned. The Obama campaign has been airing ads in Spanish, accusing John McCain of being "two-faced," using one set of words when he speaks to Hispanic audiences and another when he talks to fellow Republicans. "They want us to forget the insults we've put up with ... the intolerance ... they made us feel marginalized in this country we love so much," a narrator says, as the screen flashes some pretty nasty comments by Rush Limbaugh. Some media outlets, including the Washington Post and ABC News, have taken the Obama campaign to task for the dishonesty of the ad, but notably, the coverage has been mostly in the blogosphere, not on the editorial or front pages or on broadcast news programs.

The McCain ad on Obama and sex ed, despite hysteria from the likes of Joy Behar on "The View," turns out to be factually correct. Byron York, White House correspondent for National Review, reports that Illinois Senate Bill 99, which Obama supported in 2003, mandated that "(e)ach class or course in comprehensive sex education in any of grades K through 12 shall include instruction on the prevention of sexually transmitted infections, including the prevention, transmission and spread of HIV." The primary purpose of the bill was to lower the age requirement to kindergarten (it had been sixth grade) and to remove what supporters considered judgmental language from existing law. This passage, contained in the previous law, disappeared from the new bill: "Course material and instruction shall teach honor and respect for monogamous heterosexual marriage."

Obama has said he supported Senate Bill 99 because he wanted to protect kindergartners from sexual predators, and that the sex ed provided in the early grades was to teach children about inappropriate sexual advances from adults. But here's what the language in the bill actually says: "Course material and instruction shall teach pupils to not make unwanted physical and verbal sexual advances and how to say no to unwanted sexual advances and shall include information about verbal, physical, and visual sexual harassment, including without limitation nonconsensual sexual advances, nonconsensual physical sexual contact, and rape by an acquaintance." As York points out, the bill seemed to be as much about "protecting children from each other as from adults, and it doesn't seem directed toward the youngest children, as Obama maintained."

So much for McCain's "lies." But what about Obama's new Spanish language ad? In it Obama tries to tie McCain to one of his most outspoken critics, Rush Limbaugh. Throughout the primary season, Limbaugh excoriated John McCain on immigration reform, and he and his callers frequently derided the senator as "Juan McShamnesty." To try to tie McCain to Limbaugh is about as dishonest as it gets.

But even the use of the Limbaugh quotes -- "stupid and unskilled Mexicans" and "you shut your mouth or you get out" -- turn out to be misrepresentations as well. Limbaugh uttered the first words back in 1993 when he was supporting NAFTA. Stupid and unskilled as his comments may have been, Limbaugh's point was that NAFTA would send unskilled jobs to Mexico while creating more high-skilled jobs in the U.S. And the second Limbaugh reference was a parody of Mexican immigration law. What either of these comments has to do with John McCain is anyone's guess.

When it comes to lies, the media get far more exercised over unflattering truths about Barack Obama's record than they do about real distortions of John McCain's.