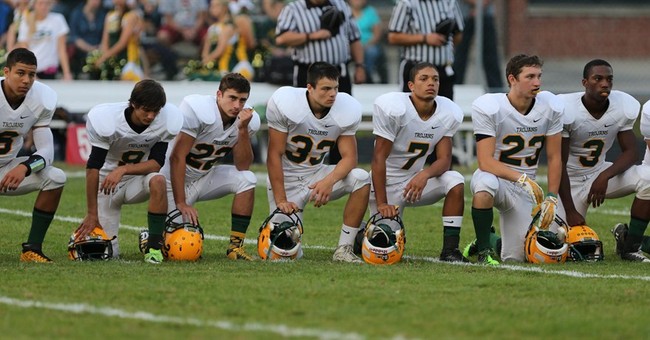 When I was in middle school, once a year we would all board busses and head to the local stadium for field day. We would all compete in various track and field events, and a small number of students would get blue ribbons for winning an event. Everyone else got red ribbons. They were then, as they are now, “participation ribbons”. (I’ll bet some of you did not know that the odious “”participation award” dates as far back as 1980. Oh well, nihil novi sub sole.)

I’m not entirely certain why the rest of us were recognized. We did not run faster, jump higher, or throw farther than anyone else. Our major accomplishment on Field Day was not getting lost between the busses and the stadium. Even though I had been raised in liberal house, there was enough common sense stirring in me back then to know that a blue ribbon was better than a red one and that discernible success was better than well, just showing up.

And so after the first such Field Day, I came home and displayed my red ribbon to my parents with the explanation that in our field day, first place contestants got red ribbons and not blue ones. Never mind that the ribbon was stamped with the word “PARTICIPIANT” in large gold letters.

In the real world, there are winners and losers. Ability is arguably the product of two things: 1) God-given ability to perform and 2) The desire to succeed. The two are not mutually exclusive, and it could be argued desire can trump natural ability.

As a lifelong Reds fan, I grew up enamored with the Big Red Machine, and like many kids in my era I was also a fan of Pete Rose.

And yes, I am aware of his betting scandal and that he has entered the world of reality television. But going back to the era when there still seemed to be giants in professional sports, Pete Rose was an astounding baseball player. But he wasn’t a natural. In the movie “4192 The Crowning of the Hit King” Rose stated that when he started playing baseball, he couldn’t run, and he couldn’t hit. He had to do it by his sweat and his drive. And he became not just a good ballplayer, but a great ballplayer, thus earning the nickname “Charlie Hustle.”

Rose understood that you don’t make it to the World Series by successfully finding the clubhouse, or by merely participating. To win, one must be better than one’s competitors. And if one does not win, one must divine why, and work to improve so that one can win.And if that is not possible, one should find another activity. Or become obsolete.

With that in mind, what lessons are being imparted by the decision of the Northern California Youth Football League to enforce its “Mercy Rule”? Simply put, the rule dictates that if a team wins by 35 points or more, that team is fined 200 dollars and the coach gets a one-week suspension. There is also an option to replace the first string with the second and third string if the score appears to be in danger of getting too high.

You can read the rule book here. You’ll want to scroll down to page 13.6

KCRA reports that while parents are ticked, league officials claim that kids were quitting the league because they were tired of losing.

The lesson being imparted to the winning team is that hard work and dedication means nothing (A la’ “You didn’t build that!”?) To the losers the message is that a loss is someone else’s fault. All in the name of fair play and preserving self-esteem.

In Kurt Vonnegut’s collection of short stories “Welcome to the Monkey House” there is a story entitled “Harrison Bergeron” It is set in an America in which all people are not created equal but are made so. The physically attractive must wear masks or clown noses so as to not hurt the feelings of the less aesthetically pleasing. Those with higher I.Q.s are forced to wear headphones over which loud noises are broadcast, designed to disrupt their thoughts.People who are physically strong are shackled with weights to make certain they do not outperform their peers. The title character rebels against these laws, and is ultimately shot dead by the Handicapper General, Diana Moon Glampers.

Vonnegut had a flair for satire, and apparently prescience. Although the Golden State has no Handicapper General, it would appear that the groundwork for the policies is being laid.