Lennie Jarratt
|
Posted: Apr 20, 2019 12:01 AM
Share   Tweet
The opinions expressed by columnists are their own and do not necessarily represent the views of Townhall.com. 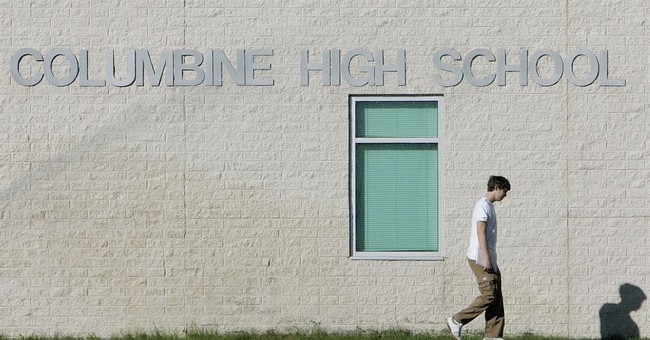 On April 20, 1999, two teens carried out an attack at Columbine High School in Littleton, Colorado. Twelve students and one teacher were killed during the assault and more than 20 others were wounded before the teen attackers committed suicide. This horrifying event shocked the nation and caused immeasurable grief for the survivors and the families of the deceased and wounded.

Over the past 20 years, there have been many discussions about the best way to keep students safe, as well as new legislation at the state and federal levels. Although school entrances have been hardened, firearm laws have been tightened, and studies have been undertaken to find ways to identify potential shooters, school shootings continue.

And it’s important to remember school shootings, while horrific, are not the only school safety issue that has faced Americans in the years after the Columbine shooting. Data show students face numerous threats in schools, many of which are directly related to bullying. Twenty-one percent of students report being bullied at school, and 160,000 students skip school each day due to bullying. In fact, a child in the United States is bullied every seven minutes. This bullying and intimidation toward students have tremendous negative effects on learning, both for the victims and those who witness the incidents.

Bullying and physical attacks are not just student on student, either. Many students are bullied by school staff, as reported in the Chicago Tribune’s important investigative series “Betrayed.”

Teen suicides are also on the rise in the United States. From 2006 to 2016, there was a 70 percent increase in the suicide rate for white teens and a 77 percent increase for black teens. While there are many reasons why suicide rates have increased, a report by Health Management Associates, which was presented to the Office of the Colorado Attorney General, show two key factors associated with suicide are bullying at school and cyberbullying.

No child should be forced to remain in the same classroom or school as his or her attacker. Students should be allowed to find a safe education environment that fits their needs. Unfortunately, this is often not possible, because many students who are bullied at school or face other dangers have limited resources or educational options to help them escape their dangerous environments.

However, there is a way for lawmakers to help students find safe, effective schools: creating a Child Safety Account (CSA) program. CSAs are a reform proposal developed by The Heartland Institute in 2018. CSAs are individual education accounts that would be funded by states using monies already designated for a student’s education.

Under Heartland’s CSA model, parents are provided with a debit card linked to the CSA account that they could use to pay for approved education-related expenses at a different school (public or private) or to pay for another education opportunity. In addition, CSA funds could be used for transportation, trauma therapies, curriculum, school uniforms, tutors, higher-education courses, standardized testing fees, college entrance exams, etc. To ensure low-income students can properly utilize CSAs, “topping off” would be permitted. (“Topping off” is allowing parents and others to contribute toward tuition and other expenses that exceed the amount reimbursed by a government program.) The funds used for this purpose would be raised through a tax-credit scholarship program and individual education tax credits.

It’s been 20 years since the horrifying events at Columbine occurred. It’s long past time to ensure the safety of all students by creating and enhancing education choice programs.