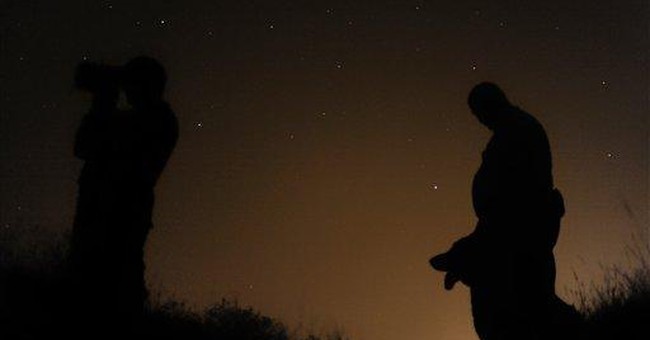 If Obama and Democrats were truly the party of diversity, why would they want to eliminate Americas distinctive, capitalist society from the world? Arent there already enough mediocre, socialist nations clogging up the globe?

Honestly, despite the demagogues in Congress meddling in the free market and causing Americas current hardships, our country clearly remains in a class all by itself. And with the plethora of second-rate nations in the world, Americas unique success makes its minority status irrefutable. Therefore, shouldnt liberals be advocating special concessions, considerations, and accommodations for America in the spirit of diversity?

Additionally, with all the hyphenated Americans that liberals have created, I think I am a minority now, too. I used to think I was an American with no hyphen required. Today, however, I have seen the light. Thanks to the Democrats politically correct agenda, I have discovered that I am an American-Constitutionalist (A-C) as opposed to an American-Hooligan-Outlaw-Lawyer-or-Evolutionist (A-HOLE). Yet, unlike other minorities who are apparently blossoming, A-Cs are a dwindling breed. Our origin is nearly forgotten in todays society. We did not come from a single place, but we did share a common set of values. The first A-Cs brought with them a belief that man was created in Gods image versus evolving from some cosmic accident. They valued human life higher than animals, vegetables, and minerals. They lived in a time when most Americans still worshiped their Creator, not creatures or creation. They placed their hope and faith in God and themselves, not governments and demagogues. I know it sounds like a fairy tale today, almost like the chronicle of dinosaurs. But both histories are true.

Nonetheless, due to my new minority status, Democrats should now identify me as part of a tormented, subsidy-needing, and exploited group. They should provide me un-Constitutional protection from hate crimes including Obamas discriminatory tax plan, which he doesnt deny will target its victims based solely on their minority-financial status. Its true that most of us A-Cs who are part of the working class will not see our taxes raised thanks to Obamas shakedown of our bosses. But when we lose our jobs, we wont be paying taxes at all. Meanwhile, Obama and his political pals --as well as their wealthy friends-- will all be just fine. I could go on and on (like A-HOLEs usually do) about all the entitlements Im going to need, but I want to focus on America.

Since Obama and Democrats are such diversity fanatics, why arent they hustling the socialist countries that they yearn to emulate-- to start sending America financial support? The foreign money could aid all of Americas sputtering socialist programs that already exist. As a minority, America should not be expected to achieve the same level of socialism that socialist countries require you know, its affirmative action to ensure diversity. For instance, America has Medicare Part D, a federal program subsidizing the cost of prescription drugs. It might not be universal healthcare, but America is not a socialist nation. Consequently, it deserves extra-credit for just having any government healthcare at all. In every other situation, liberals lower standards for minorities. Concerning socialism, America should be entitled to the same lower expectations Democrats apply in other minority cases. When you think about it, Obama ought to be praising America and expecting fewer government programs, not more.

So, given that liberals loathe our capitalist system, why cant they simply voyage to a more ideal country the way illegal aliens in America have done? Is it because most Democrats are just too lazy and hypocritical to move? Apparently, they prefer to remain sedentary and to exploit America --like they do to other minorities-- while having the gall to insist they are helping. Instead of exerting the energy required to travel to some socialist paradise, the obese Barney Franks and John Murthas expect socialism to be delivered to their doors, like artery-clogging pizzas.

Its not like liberals dont have plenty of socialist places to choose from; Canada is accessible, and Cuba is only a short boat ride from Florida. All the existing socialist wonderlands are supposed to have everything Democrats dream about: lower quality healthcare for everyone; affordable education though there are exceptions; high taxation for employers; wealth redistribution to politicians; unemployment-causing minimum wages; emasculated militaries, and so forth. Just image, perhaps if Nancy Pelosi and her liberal cohorts in Congress were to move to France, they might even be able to lead France out of its flourishing, nuclear-energy system.

On the other hand, I suppose if this election turns out with Obama on top, even American-Constitutionalists might need universal healthcare to treat the heroine habits brought on from the shame and trauma of being violated regularly by Obamas new socialist policies. His supporters must be on some sort of hallucinogen already. Otherwise, a sober person would never believe a guy who has risen to where he is through his alliances with criminals, domestic terrorists, and racists.

Then again, that is a uniquely diverse group of allies. Who cares what happens to America?