It's All About the Vice President Now 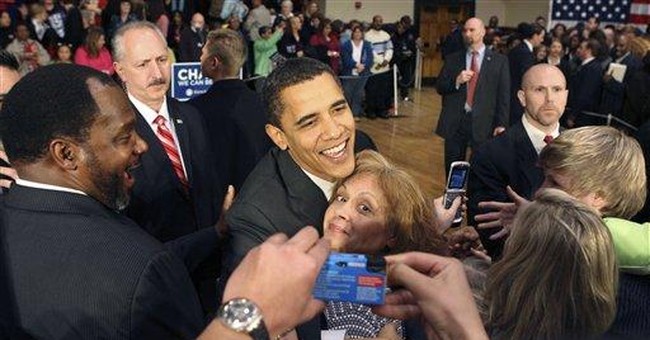 While the mainstream media wallows in the unpleasant effect John McCain’s apparent nomination is having on the GOP, are liberals also intentionally ignoring the undeniable void of influence the two Democratic candidates pose in the Middle East? No, it’s not that Barrack and Hillary both completely lack foreign policy experience or that they have far-out, socialist ideologies. Their handicaps are even more outrageous than that.

Islamic terrorists hate average, American infidels pretty much equally -- but how much do they hate the ex-Islamic infidel who converts to Christianity? According to the hadith (which is a collection of the words and deeds of Muhammad) Muslims must kill apostates. Naturally, Allah will reward the murderers on judgment day.

In fact not long ago, Michelle Malkin wrote about a British imam’s daughter who converted to Christianity. The woman (whose real name is not given) said, “[She knows] the Koran says anyone who goes away from Islam should be killed as an apostate.” The woman now lives under police protection. She says, “[Her Muslim family members] are following Islam to the word. But [she does] not think every Muslim would act on that.”

No, not every Muslim would slaughter an ex-Muslim. Not every Muslim remains silent about jihad against America either. But the Muslims who do murder in obedience to Allah -- as well as the surplus of Muslims who do not openly or vigorously condemn those Muslim butchers -- make identifying friendly Muslims from terrorists rather difficult.

Regardless, does any sane person believe that Muslim terrorists would not use Obama’s “maverick” conversion to Christianity only to inflame greater hatred towards America in the Islamic world? If Allah smiles upon jihadists who blow-up, behead, and butcher ordinary infidels, imagine the incentive and motivation for obeying his command to kill an apostate who is the head of the Great Satan itself.

Ironically, the Left consistently proposes America can accomplish more through diplomatic negotiations than by military power. But seriously, how would Muslim leaders like Iran’s Ahmadinejad welcome an ex-Muslim infidel who is President of the United States? Is there anyone who has not seen what those sociopaths are prepared to do to a man who draws cartoons of their prophet and to a teacher who names a stuffed animal Muhammad? Only an imbecile would honestly think they would be open to diplomatic negotiations with a President named Obama who ditched Muhammad in favor of Christ.

For America to elect a bona-fide apostate to President, well, that would be just like “Great Satan” himself poking Muhammad right in the eye. Imagine the success jihadists would have with a recruiting slogan like “Allah Delivers Hope: President Obama.”

The only advantage Hillary has over Obama is that she’s just an ordinary-female infidel. That’s probably better than being an ex-Muslim infidel. However, her problem lies in Islamic terrorists not warming up to the idea of women being equal to men. In fact, Muhammad also states in the hadith, ''A nation which placed its affairs in the hands of a woman shall never prosper!”

While scholars and Muslims -- outside of the Middle East -- frequently assert Islam places women higher in society than other religions, reality just doesn’t support them. Despite what is written in the Koran, Islamic women are oppressed. Think about it. How many camels get stoned to death for “dishonoring” the family name? Asserting that women are respected in Islamic countries is like Ahmadinejad claiming there are no homosexuals in Iran.

Furthermore, Hillary is the “emotionally abused” wife of a negligent, bullying husband. But despite the public’s knowledge, she pitifully and unstably defends him versus seizing the opportunity to “liberate” herself. Hillary behaves exactly the way terrorists want women to behave -- vulnerably.

Instead of repairing strained relations in the Middle East, Hillary or Obama would likely further weaken them: Hillary (the female magnet for male humiliation) and Obama (the infidel apostate and every terrorist’s fantasy).

On the other hand – if voters can look beyond McCain’s blemishes – the man has not crawfished on fighting the terrorists in their war against America. Assuming he receives the GOP Presidential nomination, voters should now seriously be considering whom he selects as his Vice President candidate. A strong conservative VP could inspire the conservative base. A Washington outsider with strong business experience that assuages McCain’s shortcomings would be ideal.

Something else to consider is that McCain would be the oldest President ever elected. He has already defied the odds. The average man’s life expectancy is 70 something. For pilots, it is lower than that. And for POWs it even lower. No one is wishing McCain harm. However, ignoring his age and health is just not smart. Enduring the level of stress he will encounter at his age, McCain simply faces a higher probability of not being able to serve a full term.

Coincidentally, America’s ninth President (William Henry Harrison) also ran on his military-hero reputation. There are a number of similarities. Some considered Harrison egotistical and ambitious. John Quincy Adams called Harrison “the most troublesome of all the office seekers during my administration.” Senator John Calhoun said of Harrison, “…he seems to enjoy his election as a mere affair of personal vanity.”  And Andrew Jackson said, “The Republic…may suffer under the present imbecile chief, but the sober second thought of the people will restore it at our next presidential election.”

Harrison was, at the time, the oldest President ever elected. He was also the first to pass away in office. None of us know what the future holds. Could Vice President Romney be America’s “sober second thought”?