We Are Living in a 'Loaves and Fishes' Moment

Laura Hollis
|
Posted: Mar 19, 2020 12:01 AM
Share   Tweet
The opinions expressed by columnists are their own and do not necessarily represent the views of Townhall.com. 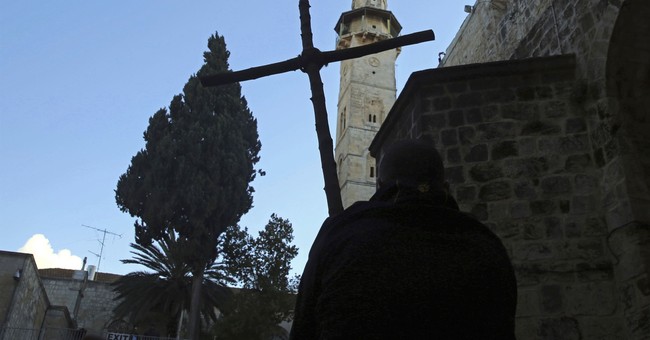 There are three accounts in the New Testament of Jesus Christ feeding a multitude of people with a handful of loaves of bread and a few small fish. In the Gospel of Matthew, the number of people is listed as 4,000. In the Gospels of Luke and Mark, the number is stated to be 5,000.

According to all three gospels, large crowds of people follow Jesus into a remote area, where he preaches to them for several hours. (The account in Matthew says that the crowds are with Jesus for "three days"). Christ's disciples advise him to send the crowds away to get food and drink. Christ tells his disciples to give the people something to eat. The disciples protest, saying that they have nowhere near enough food or money to feed so many people. When Christ asks his disciples how much food they themselves have, they point to a handful of loaves and an even smaller number of fish.

At that point, Christ blesses the food before him and asks His disciples to feed the people with it. Dutifully, they seat the crowd in smaller groups and then proceed to distribute what little they have.

None of the accounts explains in any detail what transpires immediately thereafter. But all three state that everyone present had plenty to eat, so much so that the leftovers filled seven (Matthew) or 12 (Mark, Luke) baskets!

As a child in Catholic school, I was taught that Jesus "miraculously" created all the additional food needed. Such an otherwise inexplicable event wasn't a stretch for someone, we were taught, who could cure leprosy, blindness and paraplegia, and even bring people back from the dead.

Years later, I was seated in a pew at Cathedral of the Incarnation in Nashville, Tennessee. The pastor at the time, the Rev. William Fleming, was giving a sermon on these gospel stories. In his homily, he asked us to consider a different account of what might have happened.

It was extremely unlikely, Father Fleming suggested, that hundreds or thousands of people would have followed an itinerant preacher into the desert, miles away from their own town or village, intending to hear him teach for hours -- and not have brought a thing to eat or drink. What if, he asked, the miracle was not Jesus Christ's magically "creating" food for a crowd of thousands? (Oh, it's not as if He couldn't have, seeing as he is the Son of God.)

But what if the miracle was what happened after the disciples took what little they had, sat down and began to share it with those seated next to them?

It is not difficult to envision. The small group of people seated with the disciples would likely have taken out their own meager provisions and shared them with those closest to them. Others, witnessing that spirit of selfless generosity, would be inclined to do the same. And so, Fleming continued, that spirit of generosity could have spread throughout the entire throng, until everyone who had food and drink was willing to share with others.

Although none might have individually had what could be called a surplus, under any stretch of the imagination, all of those small portions, when added together and shared, were not only sufficient to feed everyone present; there were leftovers -- baskets of leftovers.

I remember my reaction to this homily like it was yesterday. I felt like a lightning bolt had gone through me. Everything he said made perfect sense. Furthermore, Father Fleming's version of the "loaves and fishes" story was no less miraculous for being less "magical." The miracle was not the spontaneous creation of food that had not existed before. Thousands of human hearts were transformed in that place that day. They had just spent hours listening to Christ preach. And in the meal that followed, they lived that message.

That was the miracle.

I have pondered Father Fleming's homily many times in the years since, most recently as the COVID-19 pandemic spreads in the United States. The news has been filled with stories of runs on stores: shelves emptied of toilet paper, over-the-counter medicines, bottled water and other essentials.

I could, at this point, explain why this is a hysterical overreaction: that we are moving into spring and summer, and farmers will not be prevented from planting; that manufacturing and distribution may be interrupted or slowed, but our supply chain is strong.

There are plenty of factual, practical reasons why there is no need to hoard.

But I'm not focusing on the practical; I'm focusing on the miraculous, the kinds of miracles Father Fleming was talking about in that sermon 30 years ago. We've seen many of them in the past week: the medical professionals working insanely long shifts to treat patients; the professional athletes donating part of their salaries to pay workers laid off from arenas where sporting events have been canceled; the stores that have implemented "senior hours" to allow older Americans to shop without fears of crowds that could pose a threat of virus transmission; the millions of Americans committed to ordering take-out food to keep local restaurants and other small businesses afloat.

Those miracles matter. And yes, they are miracles. If you doubt it, ask yourself: "How often have I said or heard someone say, 'If our economy/country survives this crisis, it will be a miracle'?"

As we face this crisis together, do pray -- yes, please. But do not look outside yourself for miracles. Look inside yourself.

We are living in our own "loaves and fishes" moment. What may not seem enough to get us by individually will, if added together, be enough to sustain us all.

And with plenty left over.