Laura Hollis
|
Posted: Jun 13, 2019 12:01 AM
Share   Tweet
The opinions expressed by columnists are their own and do not necessarily represent the views of Townhall.com. 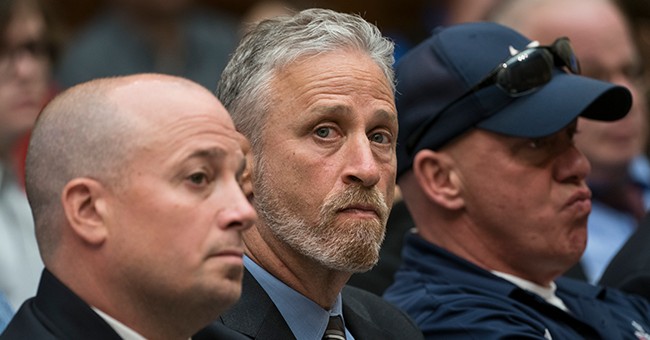 Jon Stewart is best known as a comedian and former host of "The Daily Show." Virtually all talk show hosts draw from the well of politics. But Stewart's tenure took that to a new level, and he made no bones about his distinctly progressive leanings.

Stewart is talented and intelligent, and his riffs on politics and political figures are funny (whether you share his political views or not). He is already a household name. But Stewart gave the monologue of his life yesterday in front of a congressional subcommittee charged with finding additional financial support for the Sept. 11 Victim Compensation Fund. The VCF is running out of money, and Congress has not stepped up to provide further funding.

If Stewart had a prepared speech, it was not immediately apparent. Yet his remarks were delivered with the kind of clarity and brutal honesty that we are not accustomed to hearing addressed directly to members of Congress.

Stewart's first poignant objection was to the absence of so many Senate Judiciary Committee members at the hearing. "Sick and dying," Stewart said of the first responders present, "they brought themselves down here to speak. To no one. Shameful."

Stewart also expressed his ire at the excuses made for delays and non-payment of first responders' claims: First the government claimed that the first responders weren't really sick. Then it claimed that their illnesses weren't caused by toxins in the burning rubble at Ground Zero. Then it was "We don't have the money." Stewart accused Congress of "callous indifference and rank hypocrisy."

Stewart asked rhetorically why the process of obtaining needed compensation "is so damn hard and takes so damn long." He called for the bill to be a stand-alone piece of legislation and chided Congress for its exploitation of the process: This bill will "get stuck in some transportation bill or some appropriations bill and get sent over to the Senate, where a certain someone from the Senate will use it as a political football to get themselves maybe another new import tax on petroleum."

And he drove home that the 9/11 first responders -- the FDNY, NYPD, Port Authority and EMS -- responded instantly to the terrorist attacks. "They responded in five seconds," Stewart said, pausing to compose himself. "They did their jobs. With courage, grace, tenacity ... humility. Eighteen years later, DO YOURS!"

Stewart's impassioned plea has already gone viral. No doubt additional pressure will be put on Congress. But what's the problem in the first place?

Rupa Bhattacharyya, the fund's special master, was quoted in Time magazine saying, "The plain fact is that we are expending the available funds more quickly than assumed, and there are many more claims than anticipated." Twenty thousand claims have already been processed, and 17,000 more are working their way through the system. But illness attributable to exposure to the toxins at Ground Zero will likely continue for years.

Tens of thousands of claims, and the government cannot fund them. No one should be surprised. The problems with the health care provided by Veterans Affairs to our 18.2 million veterans are notorious and legion. Indian Health Services, which serves only 2.2 million (of 5 million total) Native Americans, is even worse. (A recent Roll Call article described IHS’ “seemingly intractable problems: underfunding, quality deficiencies, a lack of agency leadership and inattention in Washington.” Sound familiar?)

Our larger social programs have even larger problems. There are 55 million people enrolled in Medicare. The program’s trustees warn that Medicare will be insolvent by 2026. And the Government Accountability Office reported in 2015 that $60 billion -- 10 percent of Medicare’s annual budget -- was lost to waste, abuse, fraud and improper payments that year alone.

Medicaid has 72 million people enrolled and consumes 20% of states' annual budgets. Yet the government's approved payment amounts to providers are so ridiculously low that many patients on Medicaid cannot find doctors or hospitals that will take it.

As for Social Security, a report released in April states that its reserves are predicted to be depleted by 2035 unless taxes are raised or benefits are cut.

The fact is that our government has done a terrible job budgeting for the populations to whom it has already promised a safety net. There is every reason to believe that a program to pay for health care for 329 million people would be a failure of unprecedented proportions, with catastrophic results.

Stewart said, "9/11 first responders shouldn't to decide whether to live, or to have a place to live," and that frankly no American should "face financial ruin" because of medical expenses.

He's right there, too. But as his testimony showed with painful clarity yesterday, the federal government has neither the ability to pay for adequate care for its citizens nor the interest in even doing so. The government's chronic mismanagement of hundreds of billions of dollars puts the health of its citizens -- not to mention the fiscal health of the nation -- at risk. We need to learn our lesson.

Stewart's speech rang with the kind of articulate passion that often accompanies a run for office, and it will not be at all surprising if we soon hear calls for him to do just that. But if he does, I sincerely hope that he can see in the treatment of the 9/11 first responders the larger pattern of consistent government failure at the highest levels, and that he will join the ranks of those of us calling for alternatives to the disaster that government-run health care would be.