Here Come the Fascists ... and the Communists

Laura Hollis
|
Posted: Sep 28, 2017 12:01 AM
Share   Tweet
The opinions expressed by columnists are their own and do not necessarily represent the views of Townhall.com. 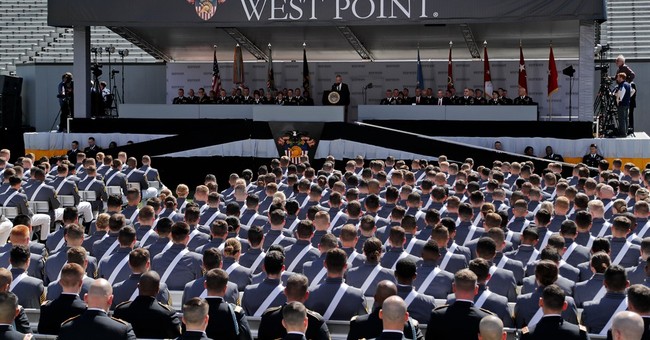 Not long after the end of World War II, author and economist Friedrich A. Hayek wrote in “The Road to Serfdom” that fascism and communism were really two sides of the same coin.

For this, he was sharply criticized and even mocked. We just teamed up with the communists to beat the fascists, the argument went. True, Stalin (grudgingly) fought alongside the Allies to defeat Hitler. But Hayek warned that this was an anomaly; both ideologies exalted top-down state control and were ultimately antithetical to individual freedom.

Arguments about fascism are all the rage at the moment. It’s de rigueur for those on the left to accuse President Donald Trump and his supporters of being “fascists.” Meanwhile, some of the left’s most visible and vocal factions -- notably but not exclusively antifa -- are accused (accurately) of behaving like fascists themselves: shutting down speech, vandalizing property, violently beating up people whose views offend them.

Meanwhile, what has slipped under the radar is the increasing advocacy for communism.

Within the past few days, a West Point graduate (and current infantry officer) named Spenser Rapone made headlines with pro-communist social media posts, including a photo of him holding his military cap with “Communism will win” written on the inside. In another post, he pulls his uniform aside to reveal a t-shirt with the image of communist revolutionary Che Guevara on it.

Lest you dismiss this as the isolated posturing of some fringe goofball, The New York Times has been running a year-long series of articles titled “ The Red Century .” Using the centennial of the 1917 Russian Revolution as its backdrop, the Times has published nearly three dozen articles on communism and its impact on the 20th century. An astonishing number of these are glowing accounts of the glories of communism.

The New York Times has been a platform for communism’s apologists since the days of Walter Duranty . But this is jaw-dropping, even for them.

On Feb. 24, 2017, the article titled, “ What’s left of communism ?” asked in its subhead, “Can a phoenix rise from the ash heap of history?” (A better question would be, why on earth would we want it to?)

Subsequent pieces praise Lenin as an unparalleled “ strategic genius ”; look back nostalgically to a time when communism inspired Americans ; paint a hopeful picture of an “ American afterlife ” for communism; defend collectivists’ visions as explained to children in the book “Communism for Kids”; characterize Lenin and the Bolsheviks as “ well-intentioned people trying to build a better world ”; point out the communist influence on popular science fiction and early environmental activism ; and -- perhaps most absurdly -- extol the virtues of communism for women, both in terms of their sex lives (in former Soviet Russia) and their “ big dreams ” (in Mao’s China).

Seventeenth-century British writer Samuel Johnson once described second marriages as “the triumph of hope over experience.” Had he lived during the “Red Century” (or thereafter), he might well have used the phrase to describe communists, who are still selling their rotting and putrid wares, despite 100-plus years of bloody experience.

Nearly 100 million people died as a result of communism in the 20th century -- more than all those killed by fascism and ordinary homicide combined. As Reason magazine author John Walters noted in a 2013 blog post , the worst famines in the 20th century (killing tens of millions) all took place in communist countries. As for women, Soviet Russia had the highest abortion rates in the world (the average Russian woman had seven abortions in her lifetime). China’s one-child policy resulted in millions of abortions (often forced , under horrific circumstances) and widespread infanticide of unwanted baby girls.

Then there were (are) the gulags, the laogai, the prison camps.

Socialism is little better. Communism’s blander cousin, it is founded on similar flawed philosophies that the state should be the provider; that people cannot be left to their own devices to order their lives as they see fit.

And socialism is often a precursor to something worse. Venezuelan strongman Hugo Chavez initially ran on a socialist platform, and then moved steadily left over the years, demonizing business, nationalizing industries and confiscating private property. He died with Venezuela already on a downward spiral. His successor, Nicolas Maduro -- another left-wing ideologue -- has destroyed whatever was left of Venezuela. Its citizens are without food, medicines, electricity or fuel. Doctors, teachers and other professionals are forced into prostitution to feed their families. Once wealthy and prosperous, Venezuela has been every bit as badly ravaged by communism as the neighboring Caribbean nations were by hurricanes Irma and Maria. Communism is one of the world’s most destructive forces.

I’ll say this much for the Times’ “Red Century” series: It makes clear that the communists are still with us, using every leftist cause as a crowbar to push the country toward their dystopic vision. Those of us who oppose collectivism are right to be concerned when the same people clamoring for socialized medicine are trying to resurrect and rehabilitate communism.

Hayek was right. And the battle lines are being drawn.