Laura Hollis
|
Posted: Mar 31, 2016 12:01 AM
Share   Tweet
The opinions expressed by columnists are their own and do not necessarily represent the views of Townhall.com. 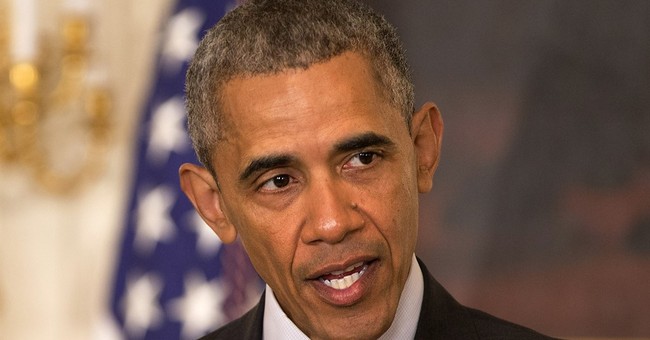 Trending
The news these days reads like a poorly written B movie script. You know the kind -- where the audience watches a formulaic plot development with one-dimensional characters, and thinks, "No one in their right mind would really do this!"

On Easter Sunday, Breitbart News' Jerusalem bureau chief Aaron Klein aired a radio interview with Abu al-Ayna al-Ansari, described by Breitbart as "a well-known Gazan Salafist jihadist allied with Islamic State ideology." Klein asked al-Ansari whether ISIS was planning attacks on U.S. soil. While al-Ansari could not confirm the number of ISIS operatives in the United States, he said, "I can confirm that our leadership made it very clear that what happened in Paris, what happened in Brussels was only a small rehearsal before the big thing that will happen in America."

As if on cue, President Obama gave a radio address in which he restated his commitment to taking 100,000 refugees fleeing ISIS-controlled territory in the Middle East. In his speech, he echoed a theme that he has used before: ISIS will be defeated, and part of Obama's strategy is demonstrating our superior kindness: "We have to wield another weapon ... [a]nd that's the power of our example. Our openness to refugees fleeing ISIL's violence."

Given that ISIS is trying its best to kill as many people in its own region as it can, it's hard to see how our depriving them of large numbers of their intended victims makes them any more favorably disposed toward us. (Presumably, those who legitimately want to come here to escape ISIS already have a favorable impression of the U.S.)

Worse, Obama's lofty language ignores more painful realities like those in Europe, which is contending with an influx of over a million refugees just in 2015. European countries are also fighting against a pervasive underground terror network that is aggressively exploiting the Middle Eastern migration. The terrorist attacks referenced by al-Ansari that took place in Paris last year and in Brussels last week killed and injured hundreds of people, further exposing Europe's vulnerability. The head of Germany's domestic intelligence agency confirmed in a New York Times article last month that European authorities know for certain "that terrorists are being smuggled in, camouflaged as refugees." An Algerian couple arrested in Germany last month for suspicion of planning a terrorist attack in Berlin entered the country disguised as Syrian refugees. Abdelhamid Abaaoud, the "mastermind" of the Bataclan attacks in Paris, was able to slip into France pretending to be a Syrian refugee.

This can be replicated anywhere. The complete lack of documentation, computer databases or any other reliable form of identification for refugees makes the notion of "vetting" them all impossible -- a fact which the Assistant Director of the FBI told the Homeland Security Committee of the U.S. House of Representatives in September of last year. Any claim to the contrary, therefore, is either unfathomable blindness or outright deception.

We don't even have to speculate about what might happen. We have already seen it. We were warned by Russian intelligence that Tamerlan Tsarnaev (an immigrant who was applying for citizenship, and one of the brothers responsible for the Boston Marathon bombing) was suspected of having been radicalized. Tamerlan escaped detection because of an error in the spelling of his last name. Tashfeen Malik -- wife of Syed Rizwan Farook, who, along with her husband, murdered 14 people in San Bernardino last year -- declared her loyalty to ISIS on her Facebook page. Nobody caught it.

If would-be terrorists within our borders can escape detection, why would we bring in tens of thousands more individuals whose backgrounds, behaviors and loyalties can be neither ascertained nor scrutinized? That is a perfect cover for those who intend us harm, and it does not take many to wreak incredible havoc, as Europe has already discovered, to its chagrin.

Why, under these circumstances, would the President of the United States double down on a policy that will subject people already living here to an increased risk of terrorist attacks?

Consider this analogy: What father, having been warned by law enforcement that criminals were likely on the prowl in his neighborhood, would leave his home unlocked and announce that fact to the world? Is that responsible? Is it any less inscrutable if someone made such an announcement and bolstered it with pious platitudes about his faith in humanity? If thieves took advantage of the unlocked door to steal the man's family blind -- or worse -- what would our reaction be?  "Why on earth would you leave your door unlocked?"

Refusing to take in tens of thousands of Middle Eastern refugees is not heartless -- there are many other ways to provide support. And no one can legitimately accuse the United States of not being receptive to immigrants. There are over 42 million immigrants currently living in the U.S. -- 13 percent of the total population, which is the largest percentage in over a century. Approximately 80 million people (or about 25 percent of the total population) in the United States are either first or second generation.

So, no -- this is not about generosity. We have amply proven our generosity. This is about national security. The President of the United States should articulate a policy that makes clear that keeping those already living here safe is his or her top priority.

To say otherwise -- to watch as terrorists exploit Europe's open borders; to see murderous attacks, and then to proclaim that we are going to take in refugees anyway, is to say that the lives of Americans are a price you are willing to pay to score political points.

That isn't kindness, and it isn't compassion. It's criminal negligence.