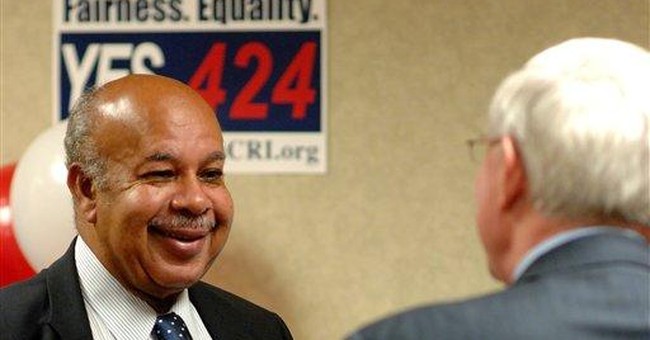 Thirteen years after California amended the state constitution to bar the government from discriminating against or preferring individuals or groups in admissions, contracting, and hiring, on the basis of race and sex, courts still are eradicating discriminatory provisions from the code. Proposition 209 passed with 54 percent of the vote.

The court ordered that references to race be stricken from the statute, but allowed the words "underrepresented groups" to remain, giving the state plenty of leeway to legally award money to minorities. "In a sense, this legal case amounts to statutory cleanup," said Joshua P. Thompson, an attorney for the Pacific Legal Foundation, which brought the case. "We're making sure that nothing remains on the statute books that contradicts the will of the voters as expressed in Proposition 209, which ordered that the state cannot discriminate."

Too bad the sentiment doesn't apply to the federal government. Or does it?

A few months ago, I was alerted to similar racial preference provisions in a House of Representatives's version of the health care reform bill that award scholarships and contracts based on race. One of several such sections:

"In awarding grants or contracts under this section, the Secretary shall give preference to entities that have a demonstrated record of the following…Training individuals who are from underrepresented minority groups or disadvantaged backgrounds."

The U.S. Commission on Civil Rights called the provisions racially discriminatory and intended to send Barack Obama and Congress a letter asking them to change the wording. According to the Washington Times, which obtained a draft copy of the letter, the commission also questioned whether the race-based programs would improve health care in minority areas.

The commission cited research that showed raising the quality of care at hospitals in the 500 largest minority serving areas would improve minority health care more than eliminating racial disparities. This finding seems intuitive, but the racism-under-every-rock civil rights industry prefers to deal in quantity over quality.

The Civil Rights Act explicitly prohibits government racial discrimination and preferences, so it baffles the mind why the federal government continues the practice. It will take more than the U.S. Commission on Civil Rights to uncover little-noticed preference provisions in massive bills. The people must take on the mantle and hold our government accountable for doing the very thing it's forbidden to do.

Perhaps supporters of preferential treatment will see the wrongness of the practice if asked this question: When whites become a racial minority, will you support government preferences for them?