Larry Provost
|
Posted: Jan 02, 2018 12:01 AM
Share   Tweet
The opinions expressed by columnists are their own and do not necessarily represent the views of Townhall.com. 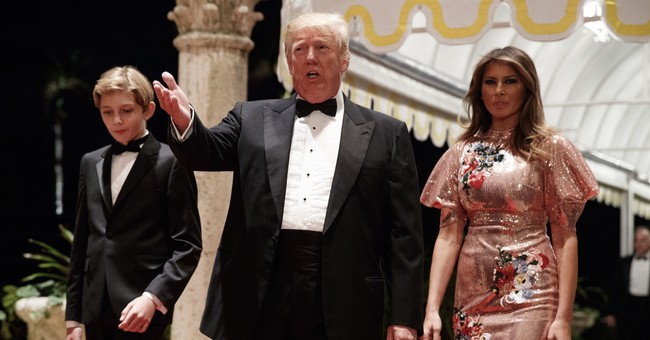 The current President of the United States deserves our support in 2018 and beyond.

For years we as Americans have sat around our tables and said, “It would be nice to elect someone who believes what they say and does what they say.”  President Donald Trump is such a President as we have never seen.

President Trump knew everyone who was anyone in New York City but was never with the elite crowd in Manhattan despite having all the money in the world.  By being President, he was never trying to fulfill some secret desire to be part of the club.  The club would discard him, and he knew it.  Instead the President is much more comfortable with the people working on his construction teams or the Americans who save what they have to come to Washington for a family vacation; people like us.

The President’s most precious asset is not his wealth but his family.  If he was in the Presidency only for himself, he would not have put his family through what they have been through these past few years.  His sons and daughters, people of acumen and with hearts of gold, have been dragged through the mud.  Our wonderful and elegant First Lady, an educated, legal immigrant who speaks eloquently, is mocked in ways that are not worth repeating by intolerant, leftist bullies.

Still, Melania and the President shine above them all.  She with her grace and he with his guts; guts that are getting results.

-Deregulation is proceeding at a pace faster than even the great Ronald Reagan.

-The tax cuts were passed and will be felt soon.

-Conservative Neil Gorsuch was appointed to the Supreme Court.

-The military has its largest pay raise in years, and for only the second time since 2010 is the pay raise above two percent.

-Unemployment is at its lowest in 17 years and even CNN wrote about the Goldman Sachs report that says the U.S. could be on the way to its lowest unemployment since 1969.

-Prototypes for The Wall are being built.

-Illegal aliens and the gangs are on the run and will continue to be hunted down.

-Trump had the guts to do what Presidents Clinton, Bush, and Obama said they would do, but never did, by acknowledging the move of the American embassy to the eternal city of Jerusalem as the capital of Israel.

-The world has a renewed respect for the word of the American government and believes it will do what it says instead of drawing fake red lines.

Leftists mock the President for the way he speaks, for he speaks in the exact way that millions of Americans speak in their homes, workplaces, and even bars after a hard day of work.  The left cannot stand this because the left looks down upon the ordinary people instead of remembering that they are, as Lincoln said, “the best kind of people. That’s why God made so many of them.”

Donald Trump was the only person who could beat Hillary Clinton; no other Republican candidate would have done so, despite Hillary’s corruption and fakeness.  He also was the single candidate who could hit back against the fake media while having the ability to turn them on their heads.

Now that he is President, Donald Trump is taking on the Washington establishment like no other. It is a true case of Dave, the ordinary citizen almost instantly coming to Washington and doing great and powerful things.  In this case, Dave is not a leftist and the left hates him for it.  Trump is in many ways an ordinary man, but he happens to be rich and not beholden to the cocktail party crowd.  Even worse for the left, the President was once, years ago, among them.  Now the left hates the President so much that they long for George W. Bush, whom they called a war criminal.

President Trump represents our best chance in generations.  But he needs our support to do so.  This does not mean we stop thinking, but he certainly deserves more support than many are willing to publicly give him.

We have been beholden to the Washington elites long enough.  We know it.  We have talked about it in our public and private spaces for years.  Now we have a leader who is not only fighting the elites but beginning to win against them.

Trump is the gutsiest politician in America.  He is fighting for us. The President has risked everything he has and is delivering. He is doing it for us.  This is our chance.  We owe President Trump a lot in 2018 and beyond.

*Views expressed in this commentary are those of the author.