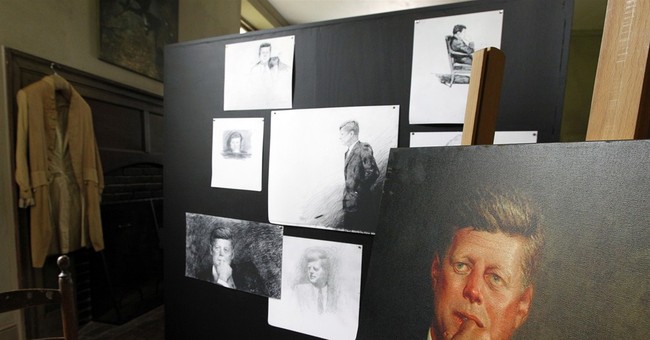 50 years ago this week, the Warren Commission concluded that Lee Harvey Oswald, acting alone, killed President John F. Kennedy. After years of controversy, the evidence is clear as to who killed President Kennedy.

The real killer had well known movements but deviated from those movements in the day before the assassination. The real killer asked his ride, due to his not having a driver’s license, to take him out to his spouse’s residence (she was staying with another woman because he was abusive) on Thursday evening November 21, 1963, the night before the assassination. Coming out visit his wife on Thursday was something he never previously did, and he also failed to ask permission from the home’s owner; another first. The real killer always visited his wife on Friday and returned to work Monday morning. The real killer also told his ride that he would not need a ride back to his wife’s residence on Friday after work, the day the President was murdered. He would only stay on Thursday night. His ride of course took him, not knowing just how strange his colleague’s behavior would be.

The real killer did not speak of President Kennedy on the Thursday he was visiting his wife even though they both spoke often of Kennedy and it was big news that Kennedy was coming to Dallas the next day. His wife said, “It was quite unusual that he did not want to talk about President Kennedy being in Dallas that particular evening. That was quite peculiar.”

The real killer was known to be a man who talked politics, having visited and even lived in different countries for political reasons, yet he did not respond when his wife, or his car ride, told him that the President was visiting. This was quite peculiar indeed as the real killer checked out books of very serious nature from the library before the assassination, including a book dealing with President Kennedy.

The real killer, the night before, pleaded with his wife to return to living with him; in fact begging her several times. She refused to move back with him. The real killer left his money and wedding ring at her house when he left the next morning, November 22.

The real killer was seen taking a package into the building and was walking at a very fast pace ahead of his ride, something he had never done before as they had always walked together.

A majority of people that witnessed the assassination pointed to shots coming from the building where the real killer worked, the Texas School Book Depository Building. Further, as many witnesses pointed out, shots were fired at President Kennedy from the sixth floor of that very building. Three workers on the fifth floor even heard a rifle being fired above them, along with three shells hitting the floor and rifle being re chambered.

The real killer knew the sixth floor of the Book Depository well because he used a smaller sized carton for a gun rest within the sniper’s nest. This is significant because there were very few of these cartons on the sixth floor and it suggested, in the words of Vincent Bugliosi, “they were moved by someone who not only was familiar with the different-size cartons available on the sixth floor but also knew where to find them—in other words, a Depository employee.”

The right palm print of the real killer was found at the bottom of the brown paper bag he was seen carrying into the Book Depository that day. This suggests that the real killer carried the bag in his right hand, as his ride said he did.

The real killer actually confessed to being on the sixth floor during later police interrogation. On Sunday November 24, the killer said that he was on the sixth floor around lunchtime and told one of the employees that he would join him downstairs for lunch. He later told police before he was finished with his work commotion from the assassination happened and that he went downstairs. This is significant because the real killer initially claimed he was on the first floor eating lunch at the time of the shooting.

Even after the real killer supposedly did not watch the president’s limousine, despite his great interest in politics, he asked police to believe that he heard the terror of the crowd outside after the President was shot but instead of going outside to investigate like any normal person would he instead went “up” to the second floor to by a drink he never liked despite his drink of choice being on the first floor.

The real killer was the only one who missed the second roll call held that day at work. This was because he left the building, permanently.

The real killer simply decided to go home for the day, on the wrong bus, suggesting he was trying to get away. When the bus got stuck in traffic, he got off the bus and then took a cab. When the cabdriver asked about the commotion, the real killer didn’t answer despite his being witness to history.

The real killer had the cab driver drive past his house instead of dropping him off where he lived. What innocent man does that? His housekeeper said he was “walking unusually fast…he was all but running.” He did not respond to her when she said, “Oh, you are in a hurry.” The real killer picked up his short tan coat, revolver, and changed his trousers. Who leaves work, changes their trousers in the middle of the day, after spending a half day at work, after the president was shot, after not having filled any orders, and then leaves his own home, with a revolver? Guilty people do that, such as the real killer.

The police arrived at the theatre to take the real killer into custody, but not before he stood up, said “It’s all over now”, punched a policeman, drew his revolver to try and kill another policeman before he was eventually subdued. The real killer then had the audacity to cry out that he was not resisting arrest and was protesting police brutality.

The real killer was apprehended by police, in a very public place, yet resisted arrest by punching an officer and trying to shoot another police officer. Not exactly the behavior of an innocent man.

In police custody the real killer, unlike innocent people, refused to give his name. The police found two different sets of identification on him. One of those sets of identification was the name he used to order the rifle and the pistol. Shouldn’t an innocent man have only one set of ID? Why would an innocent man have these weapons that were used to kill two people? Were both weapons stolen that day before or after he came home to change his trousers?

The real killer refused consent to a polygraph. However, his wife knew he was guilty. She saw it in his eyes. She knew the fantasy world he lived in, in which he believed himself someone important yet he could not keep a job, or even his family.

The real killer’s rifle was later found in the very same building he worked in, on the same floor from where the shots originated, the sixth floor. Remember, three men on the fifth floor of the building heard three shots and the sounds of shells ejected, falling on the floor, and being reloaded.

The real killer lied and said he brought his lunch to work that day. His ride told authorities that Friday, November 22 was the only day the real killer ever did not bring his lunch.

The real killer lied twice to police about a Dallas address he previously had at Neely St. He accounted for all addresses he had except one, saying he lived seven months at one address instead of four at one address, so he could cover up two months spent at Neely St. He denied ever living there despite proof that he had. The significance of this address? It was the address where backyard photos, taken by his wife months earlier, show him holding both murder weapons. Remarkably, when asked about the Neely St. address itself by police, the real killer denied ever even living there. Amazing.

The real killer’s handwriting was verified as ordering the murder weapon. Instead of admitting to owning the weapon, in spite of insurmountable evidence, he denied even ordering the rifle.

It did not come out during police interrogation but the real killer was known to be mentally unstable, all the way back into his childhood. He had no strong father figure, his family constantly moved, and he felt like a victim, hence his identification with Marxism. Yet, he could not even make his victim mentality work. He defected to the Soviet Union and even they did not want him. They only let him stay after he slit his wrist. After that, the Soviets moved him to a radio factory where he quickly grew bored. He could not keep a job after returning to the United States and was still looking for other employment up until the time of the assassination. Most of all he could not keep his family together, as the assassination may have been prevented if he had been able to convince his wife to come back and live with him the night before the President’s murder.

In case it is not readily apparent, the person whose name was intentionally left out of this article was the real killer of President Kennedy, Lee Harvey Oswald. Only a few of these items could be innocently explained away but when taken in totality, they point to Oswald as being the man who shot and killed President Kennedy and policeman J.D. Tippit. In short, the Warren Commission got it right.