The Redemption of George Wallace 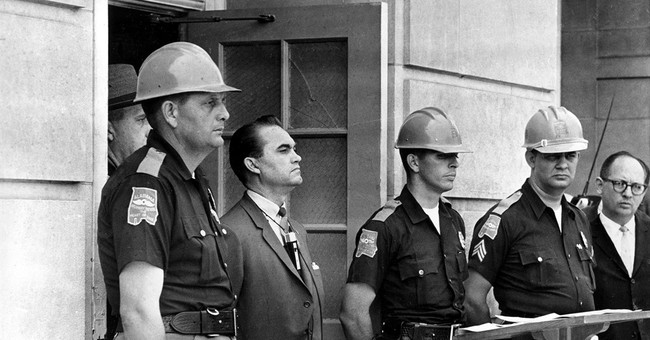 In the last year, past civil rights successes have been honored. Yet one of the biggest successes of the movement , the redemption of Governor George Wallace, is intentionally omitted and keeps division alive.

Former Alabama Governor George Wallace is today known mostly as the man in history books, and the film Forrest Gump, who defied a federal court order by standing in the schoolhouse door of the University of Alabama in order to block the first two black students from attending the University. This incident came after Governor Wallace pledged, in his 1963 Alabama gubernatorial inaugural address, “Segregation now, segregation tomorrow, and segregation forever.”

In 1965, civil rights marchers were violently turned back at the Edmund Pettus Bridge, under state forces commanded by Governor George Wallace. However, the reaction of the protestors won the hearts of a nation, and helped redeem the man who was against them. The protestors did not turn to violence, threats of violence, or coercion. Instead, they marched for their God given rights and even sang, “We love Governor Wallace, in our hearts.” Little did Wallace know how profound this message of reconciliation would be in his own life.

Wallace ran for President in 1968 and received one of the largest vote tallies for a third party candidate in American history. In 1972 Wallace ran for President in the Democratic Party primaries. He garnered victories in several states and was running strong on May 15, 1972, the day he won the Maryland and Michigan primaries. This was also the day he was shot in an assassination attempt.

Wallace survived the shooting and, in the midst of his pain, received by his bedside the political enemies he had. His visits, and his pain, made him think of the suffering he caused the black people, and all people, of Alabama and America.

Wallace lived another 26 years after the shooting and finished well. He returned to his faith and in 1974 gave his testimony of Christ at Thomas Road Baptist Church, and thereafter began reaching out to those he had wronged. Governor Wallace apologized to the Selma marchers whom he had turned back at the Edmund Pettus Bridge. He made amends and honored James Hood and Vivian Malone, whom he had blocked entrance from the University of Alabama, with awards for courage. Governor Wallace even forgave the man who shot him.

In 1982 George Wallace ran for an unprecedented fourth term as Governor of Alabama. He won the race and gained, for the first time in his career, a large portion of the black vote in that state. The final Wallace administration saw a record number of black appointments in state government.

Congressman John Lewis, now the last surviving speaker of the 1963 March on Washington, wrote about Wallace in 1998, “…our ability to forgive serves a higher moral purpose in our society. Through genuine repentance and forgiveness, the soul of our nation is redeemed. George Wallace deserves to be remembered for his effort to redeem his soul and in so doing to mend the fabric of American society.”

The redemption of George Wallace would not have been possible without the message of love and brotherhood that the Civil Rights Movement showed to him. This message of reconciliation should be celebrated, and not downplayed, by those who claim to carry on the legacy of Rev. Martin Luther King. It is ironic that as Governor Wallace changed, the civil rights movement of the 1950s to mid 1960s became more militant and less focused on reconciliation.

Governor Wallace’s segregationist past will rightfully be be remembered by the many who study history, but is also unprofitably stirred up by a loud few who wish to perpetuate rage. Yet the most important legacy given to America by the reconciliatory civil rights movement of the 1950s to mid 1960s, and later George Wallace himself, is one of deep brotherhood and reconciliation.