Fauci Would Prescribe Chloroquine to Patient Suffering From COVID-19

Larry O'Connor
|
Posted: Mar 25, 2020 10:00 AM
Share   Tweet
The opinions expressed by columnists are their own and do not necessarily represent the views of Townhall.com. 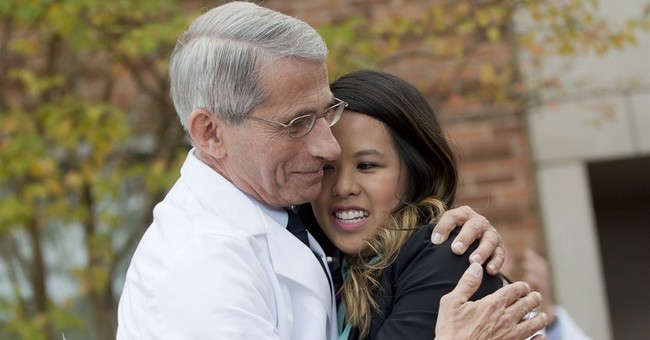 Editor's Note: Did you know there is a special column from Larry on Thursdays? A third per week! Sign up here to become a Townhall VIP member to get it.

In the past 24 hours, Dr. Anthony Fauci has said there is no foundational difference between himself and President Trump in how to deal with the government's response to COVID-19, that the president has never over-ruled his recommendations, that he wished the media would stop trying to pit him against the president and, now, we learn that he would prescribe hydroxychloroquine to a patient if he were treating them for coronavirus.

One of the most despicable political sideshows of the American media's failed coverage of the COVID-19 coronavirus pandemic is the endless and relentless insistence that there is some kind of huge disagreement and even hostility between President Trump and Dr. Fauci, the man he inserted as one of the point players in his coronavirus task force.

The false reporting began in late February when the task force was first formed. The New York Times reported on Feb. 27 that communications with media outlets regarding the government's response to the outbreak would be coordinated through the vice president's office, a fairly common move when a cross-departmental task force is formed.

This was interpreted by the White House press corps that Fauci was being "muzzled." NBC News extrapolated The Times article into the despicable headline "Is the White House starting to censor public-health officials?" Two days later, at a press briefing coordinated by President Trump, NBC News attacked the president and accused him of silencing the good doctor who happened to be standing next to him.

"I'm just going to ask you directly about this with regards to the flow of information, from the very beginning, you received a lot of criticism regarding that," asked an NBC reporter. "In particular, about Dr. Anthony Fauci. He is well-renowned in contagious diseases and there were reports out there that he was being muzzled. Can you tell us that this widely-respected expert Dr. Fauci will have every opportunity to tell us the truth?"

See how that works? Trump can't be trusted with telling us the truth... will he let Fauci tell us the truth?

Trump stepped away, after correctly characterizing the reporter as "very dishonest" and allowed Fauci to address it directly. "I've never been muzzled and I've been doing this since Reagan," Dr. Fauci responded. "That was a real misrepresentation of what happened."

But, the Washington, D.C., parlor game of trying to sew dissension and chaos within a White House continued on a daily basis.

Yesterday, Fauci (who, we had been recently told, was muzzled yet again) went on a bit of a media blitz. He told WMAL radio in Washington, D.C. that the president was doing a great job, that there wasn't any fundamental difference in the foundational principals in attacking the virus and that he wished the media would stop pitting him against the president.

And, on AM 990 in Philadelphia, he talked with Townhall columnist and morning host Chris Stigall about the very real hope in the hydroxychloroquine drug that has been the buzz recently.

"If you're a doctor listening to me right now and a patient with coronavirus feels like they want to try that," Stigall asked, "and you're their doctor, you're not Anthony Fauci the guy running the coronavirus task force, would you say 'alright, we'll give it a whirl'?"

"Yeah, of course, particularly if people have no other option," Fauci said. "These drugs are approved drugs for other reasons. They're anti-malaria drugs, and they're drugs against certain autoimmune diseases like lupus. Physicians throughout the country can prescribe that in an off-label way. Which means they can write it for something it was not approved for."

This blows away the newest, fake non-controversy between Fauci and the president that he is unhappy that the president announced the possibility that hydroxychloroquine could provide a treatment option for patients suffering from COVID-19. Of course, there needs to be further testing on the efficacy of this drug and this treatment, the president has always acknowledged that and so has Fauci, he did so in the interview with Stigall. (Listen to the entire interview below.)

But, when pressed on the issue in the most fundamental way, "Would you, as a doctor, prescribe this for your patient?" Fauci said "yes."

Do you see this reported anywhere? And why not?

In the face of a global pandemic, the media couldn't possibly have a day go by without trying to bring down President Trump. The priority is to drum up some kind of invisible drama for political editors, writers and producers to latch onto instead of providing sober, contextualized data for their readers and viewers. They don't know how to report on a pandemic, only on a special counsel investigation or impeachment. That's what they were hired to do. It's all they know.

So, in the face of a public health crisis and a government task force focused on stopping the spread of a virus, they go to their regular playbook. Use anonymous leaks from people hostile to the president to sew dissension, division, and mistrust. That kind of destructive political journalism will win you Pulitzers on a normal day in Washington. But, these are not normal days.