Larry Kudlow
|
Posted: Jan 28, 2018 12:01 AM
Share   Tweet
The opinions expressed by columnists are their own and do not necessarily represent the views of Townhall.com. 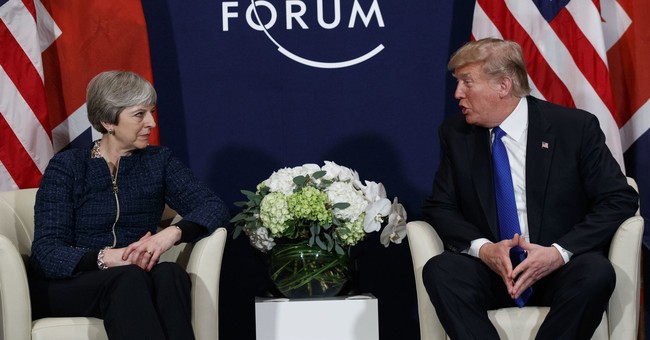 Quote: “America is open for business, and we are competitive once again.” End quote. That was just one of the key lines in President Trump’s highly successful Davos speech this week.

Of course, in going to Davos, Trump entered the lion’s den. A year ago such a visit would have been a poor idea. Back then, elitist heads of state, the EU bureaucrats, and the international CEOs were uniformly against Donald Trump.

But Trump’s 2018 Davos strategy was a brilliant stroke.

A year later he could make the fact-based argument that, in his words, “The world is witnessing the resurgence of a strong and prosperous America.”

And the core of his message was this: “There has never been a better time to hire, to build, to invest, and to grow in the United States.”

Trump’s polices, in just one year, have begun to restructure the American economy. We’ve moved from “secular stagnation” (i.e., high taxes, massive regulation, huge government spending, and a disdain for business and investors) to a new private-sector incentive system thatrewardssuccess.

By slashing individual and corporate tax rates, providing 100% immediate expensing for plants and technology, and making it easy for big companies who fled our high-tax system to bring the money back home, he has ended the war against business and investment.

And it has happened faster than anyone imagined possible.

And now, a roaring stock market, generating $7 trillion in new wealth, provides the only realistic chance of bailing out excessive government-union pensions and benefits -- even though these very unions totally opposed Trump’s corporate tax reform.

Ankle-biting Democrats say, “Rising business profits will go to shareholder buybacks.” As if that were abadthing. Meanwhile, new money is circulating throughout the economy to start new companies and re-oxygenate the system.

Democrats say the incredible business response to tax reform is nothing more than one-time crumbs for workers. But didn’t Walmart -- which has bitterly fought attempts to raise the federal minimum wage -- just raise its internal minimum wage for virtually all its wage earners, give bonuses of up to $1,000, expand maternity and parental leave, and commit $5,000 to every employee who adopts a child?

The post-tax-and-regulatory reform policies of the Trump administration have barely been put in place, yet they’re already benefiting working folks around the country. These are people who have barely had a raise in20 years.

Trump’s critics belittled the idea that corporate tax cuts could actuallyincreasewages. But in faster than a New York minute, several million wage earners have already benefitted.

Then there are the know-it-all critics who say there’s no academic evidence to support the view that business taxes matter for the workforce.

Yet peer-reviewed papers -- from respected economists Alan Auerbach, Laurence Kotlikoff, and the Romer family -- conclude that higher after-tax returns to capital generate investment. I’ve been saying this for a long time. With more capital behind each worker there’s greater productivity. And new investment projects raise the demand for workers and their wages.

And don’t forget the president’s argument about the importance of regulatory reduction. “Regulation is stealth taxation,” Trump said in Davos. “We are freeing our businesses and workers so they can thrive and flourish as never before.” Don’t forget that the Trump tax bill ended the Obamacare individual mandate and opened the door to energy drilling in ANWR.

And then, in Davos, the president offered a fantastic point on the so-called debate over globalism and trade: “As president of the United States,” he said, “I will always put America first, just like the leaders of other countries should put their countries first also.But America first does not mean America alone.” [Italics mine.]

In an illuminating interview with my friend and CNBC colleague Joe Kernan, Trump said he’s willing to deal on trade -- including NAFTA, and perhaps the Trans-Pacific Partnership (TPP). But he correctly insisted on reciprocity. Barriers should be torn down by both sides. Arbitrations must protect America, not penalize it.

“I’m a free trader,” he said. “A fair-trader. But there must be reciprocity.”

He also told Kernan that the U.S. dollar will strengthen based on America’s resurgence, and that it will remain the world’s reserve currency.

So, America First came to Davos, and to all the multi-lateral globalists and multi-nationalist elites. And these CEOs, bureaucrats, and academics listened carefully to Trump’s words.

Success has a thousand fathers, but defeat is an orphan.