Attack Obamacare, but Talk Growth Too 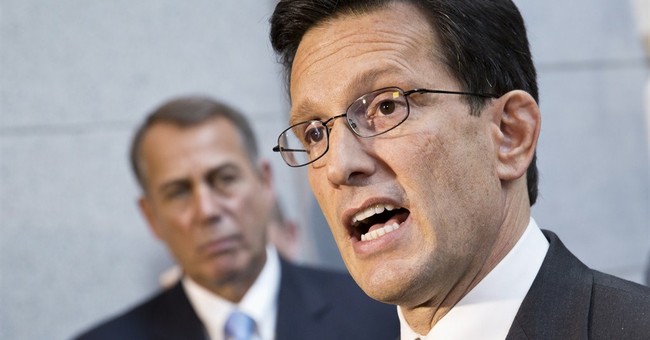 There’s no question that the catastrophic debut of Obamacare -- including the website breakdown and the millions of pink-slip cancellations -- will be a great card for Republicans to play on the way to the 2014 midterm elections. No question.

The president lied about his lies about keeping your health plans and doctors. And when he did finally apologize, he didn’t really say he was sorry. It’s also possible that we’ll see 10 million more insurance cancellations, leading to much higher premiums, bigger deductibilities, and more cutoffs between patients and their doctors. And employer-based cancellations will compound this disaster, with the whole process stretching across most of next year. It will be a killer for the Obama Democrats.

But while my conservative-pundit colleagues are out thrashing Obamacare, I want to raise a critical point: Don’t forget economic growth.

The Pew Research Center’s Andrew Kohut recently wrote a Wall Street Journal op-ed titled “The GOP Is in Better Shape than You Think.” It provides an unbelievable statistic: Independents favor the GOP on handling the economy by 46 to 30 percent. Unbelievable. Overall, according to Pew Research, a plurality of all voters gives the GOP a 44 percent to 37 percent edge on the economy.

So I want to make a pitch that Republicans not lose sight of the importance of economic growth in the months leading up to next year’s midterms. And that suggests the importance of a program of pro-growth tax reform and simplification. Keep the spending-cut sequester and budget caps in place. Push deregulation that will help small and large businesses grow more and hire more workers.

The Obama economy is not keeling over. Despite the government shutdown, nonfarm payrolls increased 204,000 in October, private payrolls jumped 212,000, and jobs for the prior two months were revised upward by 60,000 to 70,000. The numbers were higher than expected.

No, these are not fabulous numbers. But they are decent. Of course, 7.3 percent unemployment is still too high, participation rates are way too low, and we need to traverse a multimillion-job deficit to get back to the prior historical trend. So Republicans should keep up the mantra on this, talking jobs and take-home pay. In other words, talking economic growth.

The GDP report for the third quarter, at 2.8 percent, also arrived better than expected. The Obama trend line for the four-and-a-half-year recovery is closer to 2 percent than the more normal 4 percent rate experienced over the last 40 years. But as Mitt Romney painfully learned during the presidential race, just attacking the economy is not enough. It sounds way too pessimistic and doesn’t provide concrete measures to boost growth, jobs, and take-home pay.

So with Pew polls showing a big Republican advantage on the economy, the GOP must not squander the opportunity to stay on top of the growth issue. Interestingly, in this year’s Virginia governor’s race, exit polls showed the economy to be a more important issue than Obamacare.

As a supply-sider, I urge the GOP to stay on track with pro-growth tax reform -- broadening the base, lowering marginal tax rates, and simplifying the entire code for businesses and individuals. And I am also impressed by Senator Mike Lee’s proposal for a substantial increase in the child tax credit, which will boost take-home pay for the middle class.

Now, the push for economic growth is not a brand new idea. But it’s an important idea. And Republicans, I think, can walk and chew gum at the same time. They can nail Obamacare and promote economic-growth policies.

As for the health-care issue, Republicans should also spend more time promoting their own alternative policies. Why not more freedom to choose your insurance plan by shopping across state lines? Why not tax breaks going directly to individuals and families rather than big business and big labor? In a play for the youth vote, why not new plans for preventive medicine and major-medical catastrophic insurance that includes rock-bottom premiums? The young and healthy might think about returning to the GOP if the GOP comes up with a few ideas to help them out.

In the long run, positive conservative messages on growth, taxes, and health care are better than just negative attacks.

That’s all I’m trying to say here. While Senate and House Democrats are panicked over the Obamacare catastrophe, Republicans in both houses must not forget the political importance of a strong growth and jobs message for 2014.