Here’s some friendly fiscal advice: Any time some Washington big shot like Ben Bernanke or Tim Geithner claims that immediate spending cuts in the debt deal will harm the economy—ignore them. Completely. You know why? Because in this great country of ours, spending never goes down. Never.

Take a look at the chart below.

Now, Paul Ryan's is of course a couple of trillion dollars lower than Obama's over the next ten years. But what do they both have in common? They both go up. As in spending more, not less. As in, roughly $40-45 trillion dollars more. That's a whole lot of taxpayer money, folks. 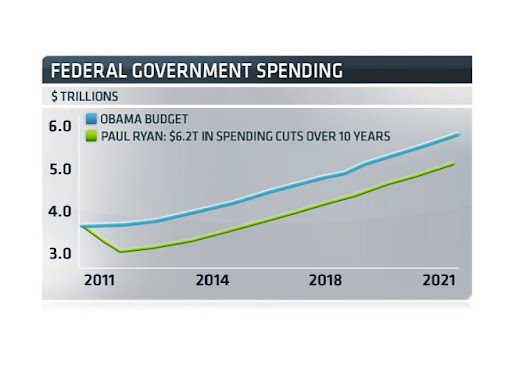 Now why is this? It’s because of something called the “current services baseline" which includes population and inflation increases built into the budget. Entitlements have their own formulas.

So when you hear a politician tell you they’re cutting spending, they’re actually referring only to reducing the growth of spending. Rarely, if ever, do they actually reduce the level of spending.

Think of it this way: You’re out car shopping and thinking about buying a $100,000 Mercedes. That's your target. But then you decide to forego the Mercedes and opt for a $20,000 Chevy instead. Well, guess what? Congress would score that as an $80,000 budget cut. Huh? We all know that it’s actually a $20,000 budget increase.

Let’s be honest here. This budgetary game remains one big taxpayer scam. Look, I used to work in the federal budget office. I know the game.

Here's yet another scam: big budget deals say they “cut” (there's that word again) a couple of trillion dollars over ten years. But most of it is targeted for the last couple of years, as in years eight, nine, and ten. So basically it'll never happen. It's four or five congresses from now. Laws change. Deals are broken.

At the end of the day, the only thing that really matters is next year's budget. Will it be cut? Ever in my lifetime? Because if it were cut, it would bring that line in that chart above down. Now that would be a called a decline. All of that other stuff? Increases.