Kevin Warsh Is on the Money 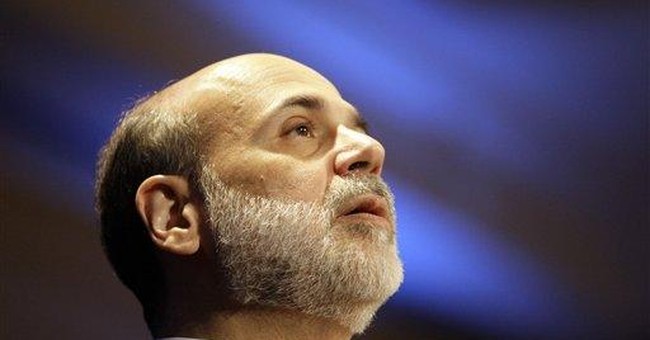 Attendees of the G-20 meeting in Pittsburgh and members of the Federal Reserve Board in Washington should carefully read a Wall Street Journal op-ed by Fed Governor Kevin Warsh. In a piece titled "The Fed's Job Is Only Half Over," the former Wall Street investment banker sends a shot across the global economic bow. He says the Fed's job will not be done until it removes the easy-money policies put in place over the past year. In other words, an exit strategy.

Warsh writes that "policy likely will need to begin normalization before it is obvious that it is necessary, possibly with greater force than is customary." He's saying the Fed must be tougher, and act sooner, if it is to avoid an inflationary bubble reminiscent of the 2002-06 period, or for that matter the 1970s.

Appointed by President George W. Bush in 2006, Warsh may be the only real supply-sider at the central bank. And while he doesn't explicitly talk about the profligate surge of fiscal spending and borrowing by the Obama administration and its international counterparts, it's not hard to infer that he's talking about that, as well.

But back to monetary policy. Warsh says the Fed should not obsess about backward-looking indicators, like gross domestic product and yesterday's inflation readings. Instead, he argues that the central bank should track forward- looking signs of growth and inflation by paying careful attention to financial markets, asset prices and risk premiums.

In essence, Warsh is opting for a market-price rule that presumably tracks commodities (including gold), bond markets, the dollar exchange rate and various credit-risk spreads in the fixed-income area. He's moving away from the Philips Curve and the idea that the Fed should target an unemployment-inflation tradeoff -- which is all Ben Bernanke ever seems to talk about.

Since the unemployment rate is a hopelessly lagging indicator, the inflation forces will be well out of the barn by the time it starts dropping significantly. But Warsh knows that markets flash signs of the future. So rather than drive by watching the rearview mirror, he wants the central bank to look through the front windshield.

Warsh was a senior White House official under President Bush, and he had a hand in the supply-side tax cuts on investment that were enacted in 2003. But it sounds like he learned a lot about the Fed's cheap-money policies at the time. Those policies drove down the dollar for years and resurrected inflation, and they're what killed the incentive effects of the Bush tax cuts and their positive effects on economic growth.

The subsequent housing and commodity bubbles -- including the massive energy shock -- utterly doomed the economy. The Fed took tiny, one-quarter-of-a-point steps over a period of four years in an attempt to reclaim anti-inflation normalcy. But the policy failed dismally. So now Warsh seems to be saying: Let's not make the same mistake again. Let's take strong, large steps to raise the target rate and drain excess cash from the economy.

I'm willing to bet that the rise in gold and commodity prices, along with the drop of the dollar, has Warsh thinking the Fed's tightening time is not far off.

Of course, this same dollar turbulence should be a fulcrum for the G-20 nations. If the U.S. greenback keeps sinking, a monkey wrench will be thrown into the global recovery. Dollar depreciation can export U.S. inflation worldwide, and drive up interest rates at home and abroad, if we force our trading partners to print too much money by buying too many dollars in a futile attempt to absorb dollar-excess.

So instead of bashing banker pay, the G-20 members should undertake a worldwide dollar-rescue-and-stabilization program. That would strike a blow for currency stability everywhere and promote global economic growth.

Alas, I don't see any growth policies coming out of the G-20 nations right now. And with phrases like "peer review" being thrown around, I fear a U.S. exercise in financial and economic multiliteralism. Just as President Obama seems to suggest that American foreign policy will be run through the United Nations, I'm wondering if U.S. economic and financial policies will be passed through the G-20 -- a one-world financial regulator that will handcuff the American system.

At the moment there are no supply-side tax cuts on the table. There's no clear trade liberalization. And there's no focused attention on the currency problem known as the dollar. Brazil and China are talking about a new world reserve currency, which is one reason why gold has been rising. But the dollar dilemma will rein supreme unless the G-20 does something about it.

Kevin Warsh doesn't go this far in his Journal piece, but his attention to financial-market price signals is something all the big-shots in Pittsburgh should be thinking about.