Jobs Down, Stocks Up? 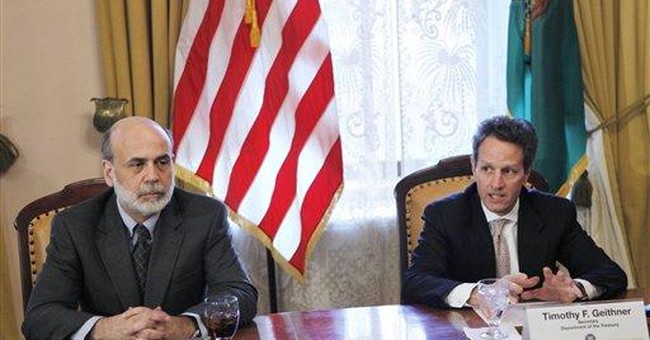 How do you explain it when jobs plunge and stocks surge? That’s what happened Friday as the January employment report revealed a disastrous 598,000 drop in payrolls. Actually, the job loss was 664,000 if you count downward revisions to the prior two months. Meanwhile, the unemployment rate moved up from 7.2 to 7.6 percent. So there’s no sugar coating it: It was a terrible report.

However, stocks traded strong on Friday, with the Dow Jones finishing up over 200 points. Broad stock indexes are up 15 to 20 percent from their November lows. How can this be? Well, the stock market is telling us that the economy’s future is a lot brighter than its past. The stock market looks ahead; the employment report looks behind.

Mustard seeds planted a while back are now pointing to economic recovery. The huge energy tax cut is one such mustard seed. The related inflation collapse is another. By the way, in today’s jobs report, wages rose again, and now stand nearly 4 percent higher than a year ago. With zero inflation, that’s a real increase in worker purchasing power for the 92.4 percent, or 135 million workers, still employed.

Then, of course, the Federal Reserve has been pumping in money to offset credit and asset deflation. The old Milton Friedman M2 money measure has grown by $590 billion since early September for a 20 percent annual rate of increase.

In the short-run, as money rises and GDP declines during a recession, the turnover (or velocity) of money plunges. But the use of money eventually picks up, which means all that new M2 growth is going to stimulate the economy this year -- and by a whole lot more than the goofy stimulus bill now before Congress.

Monetary lags are long and variable. But the money supply historically kicks in somewhere between six and 12 months. Through January we’ve had five months of money stimulus. So stocks may now be telling us that the gloom-and-doom crowd -- and its pessimistic economic prognostications that cover all of 2009 and in some cases 2010 -- is about to be proven wrong.

The commodity markets -- among the first asset sectors to respond to money stimulus -- are stabilizing. Broad commodity indexes are 6 percent or so above their lows. Ditto for energy. The Baltic Dry Index, which measures shipping volume around the world (those commodities are in the cargoes), has mounted a big rally, up almost 100 percent off its bottom. Gold is up more than 20 percent. (Investors call this the “reflation” trade.) And long-term Treasury rates have moved from 2 percent to around 3 percent in the 10-year market, another sign that the future economy will be stronger than the past.

There’s also hope for the hard-hit financial sector. A new bank-rescue plan to be announced Monday will probably guarantee a bunch of toxic assets. At the same time, the Fed is stepping up its efforts to refinance asset-backed bonds for banks, consumer-finance companies, and hedge funds in the secondary markets.

And while the quantity of money is rising significantly, the quality of credit is improving, too. All the credit-fear indicators -- from LIBOR all the way out to corporate-bond spreads -- have declined substantially.

Meanwhile, Bank of America CEO Ken Lewis told CNBC on Friday that he can get out from under TARP in three years. There will be no nationalization. Lewis also said his firm’s acquisition of Merrill Lynch will be successfully executed over time. So it’s no surprise that bank stocks were one of the leaders in Friday’s huge rally.

With all the fiscal mania and Keynesian government-spending-multiplier talk in Washington these days, most folks have forgotten Milton Friedman’s dictum that money matters. Indeed, money growth could well produce the biggest economic surprise this year. And as Art Laffer has taught us all, taxes also matter -- a lot. In fact, the only real stimulative part of the behemoth stimulus package is the simple fact that marginal tax rates will not be raised.

So cheaper energy, bundles of new money creation, zero inflation, and no tax hikes could very well combine to produce a stronger economy as the year progresses -- to the great surprise of the majority of economic pundits. That may well be the message of Friday’s stock market rally, which shrugged off yesterday’s painful slide in jobs.