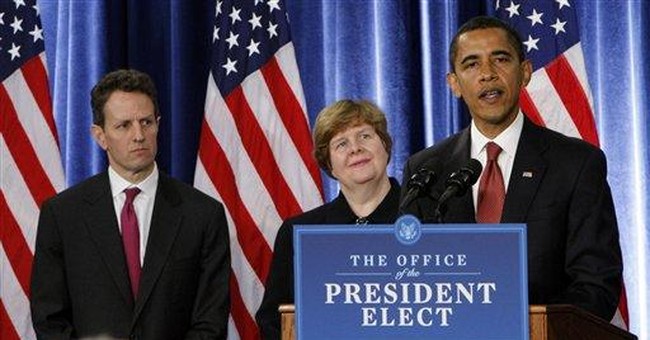 When President-elect Obama had a chance to squash the tax-hike threat once and for all at his news conference Monday, he took a pass and let the question linger for another day. But his new economic cabinet appointments strongly suggest there will be no tax hikes next year.

Stocks, for one, like what they’re seeing from Obama’s latest cabinet selections. On Friday, Obama announced Tim Geithner will be his Treasury man, and on Monday he made Larry Summers his White House economics tsar and named Christine Romer to the top spot in the Council of Economic Advisers (CEA). Stocks rallied 900 points across this stretch. That’s not the end of the stock story. Markets also like the new super-TARP government plan to bailout Citigroup, which effectively guarantees the banking system with a massive insurance-like policy. But markets may also sense a little pro-growth good news in the Obama policy mix.

When asked about tax hikes on Monday, Obama said the debate is between repeal and not-renewal. In other words, repeal the Bush tax cuts in 2009, thereby raising tax rates on capital gains and successful earners, or wait until the Bush tax cuts expire at the end of 2010. Investors want to hear the latter, and Mr. Obama said his team will make a recommendation.

Here’s my thought on his team. Summers, Geithner, and Romer will all recommend no tax hikes in a recession. Maybe for Keynesian reasons; maybe a nod to supply-siders. Obama talked about a liberal-conservative consensus. But what’s especially encouraging is the appointment of Ms. Romer, who easily could serve as CEA head in a Republican administration (just like Geithner could have been McCain’s Treasury man).

About a year and half ago economist Don Luskin sent me a long article about taxes by Christine and her husband David Romer, who were writing for the National Bureau of Economic Research. From the introduction: “The resulting estimates indicate that tax increases are highly contractionary. . . . The large effect stems in considerable part form a powerful negative effect of tax increases on investment.”

Later in the article, the Romers write: “In short, tax increases appear to have a very large, sustained, and highly significant negative impact on output.”

That’s what makes the Romer appointment so interesting. In fact, there is no question that Obama’s economic team is right of center. All three are market-oriented. They’re also pro-free-trade. Hopefully Summers and Geithner maintain the Robert Rubin King Dollar policy of the Clinton years. And if Ms. Romer can stop tax hikes, that will help the greenback even more.

At a minimum, both Romer and Geithner could have served under Gerald Ford or George H. W. Bush. But they may be more pro-growth than that. Romer’s study of the damage of tax hikes on the economy and her emphasis on investment are right on target. In a New York Times story, a former Treasury colleague of Geithner’s says, “he’s no liberal.” As for Summers, while he has been mau-maued by Democratic feminists and some of the unions, he is a tough, clear-headed thinker who has for years tried to merge Keynesian and supply-side policies. No mean feat.

Now here’s the rub: all this talk about a $700 billion stimulus package. I hate to be the one to pull the plug, but government cannot spend our way into prosperity. The wish list of Democratic spending initiatives includes short-term tax rebates, massive new transportation bills, even more education money, exotic green-technology spending, a big-government embrace of health care, and heaps of cash for UAW-Detroit carmakers. None of that will stimulate economic growth.

Economist Paul Hoffmeister has it right: We need to invigorate incentives to produce and invest. Let me take it even further. We need to revive the dormant animal spirits, which have been beaten down by a brutal bear market in stocks, the ongoing housing slump, and all the myriad blockages to credit availability. A bunch of new spending won’t do the trick. Lower tax rates will.

Government policy must make it clear that new successes will be handsomely rewarded. This will be Obama’s greatest challenge. While he may not raise taxes in 2009 -- a good thing -- he hasn’t yet come up with a new bolt of electricity that will hardwire the serious risk-taking that lies at the heart of free-market capitalism. Right now, the missing electric bolt is lower tax rates and greater rewards for new risk investment by investors, successful earners, and business.

On the plus side, however, Mr. Obama talks optimistically. That’s good. He says he’s hopeful about our future. And he says he is confident that American spirits will be resilient in this difficult time. That’s Reagansesque, Kennedyesque, and FDResque. But while FDR’s big-spending and regulating prevented economic recovery, Kennedy and Reagan opted for across-the-board supply-side tax-rate reductions to get America moving again.