Only Obama Can Make the Sale 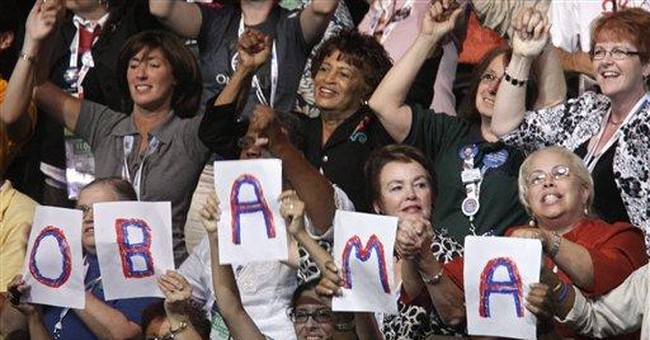 There's no Obama-Biden bounce, according to the latest tracking polls. In fact, as of Wednesday morning, Scott Rasmussen reports a 47-46 one-point lead for John McCain. Gallup has the race even and indicates that conservative Democrats -- including married women -- are peeling away from Obama-Biden.

Has a McCain bounce occurred during the Democratic convention? It's not out of the question.

Sen. Hillary Clinton gave a strong speech Tuesday night, at one point invoking a powerful Reaganesque sense of American optimism and confidence. Good for her. But the early morning line Wednesday didn't show any bump for Barack Obama, despite Hillary's endorsement. Her husband, meanwhile, has virtually endorsed McCain. And he indicated he'd be leaving town following his speech Wednesday night.

But there's more to this Obama-Biden-bounce deficit than the Clinton cold shoulder. Another Gallup poll says 50 percent of Americans expect their taxes to be raised under Obama. And make no mistake about it: There are many doubts about the Illinois senator regarding his experience, his foreign policy, his economics, and his prior political and spiritual relationships. Despite some good moments Monday night, Michelle Obama didn't erase these doubts. In the end, only her husband can do it. And only Obama can unite the badly split Democrats at this late date.

Ronald Reagan united a split GOP in 1980. George W. Bush united the McCain, Malcolm Forbes and cultural-conservative factions in 2000. Barry Goldwater couldn't do it in '64. Nor could Hubert Humphrey in '68, Gerald Ford in '76 or Jimmy Carter in '80. But Bill Clinton succeeded in '92, and now it's Obama's task in '08. That's his job. No one can do it for him.

While the stock market looked warily on the Democratic National Convention this week, a lead story in The Wall Street Journal offered a serious indictment of Obama's economic program. "Sen. Obama," wrote the authors, "is proposing to use the government to remake economic policies in a way that hasn't been seen in Washington in decades." And if it's a three-house Dem sweep in November, it will be Katy bar the door. Big-government spending programs, tax increases, trade restraints, a government health-care plan, cap-and-trade on climate change -- all without any real deficit restraints, which are accorded a low priority by Team Obama.

Incidentally, while the public clamors for drill, drill, drill, Obama wants high-cost, cap-and-trade carbon regulation enforced by the Environmental Protection Agency. Now, McCain also wants cap-and-trade, but not if India and China don't go along. Apparently, Obama will not be constrained by the rest of the world.

Sure, the economy is languishing. But do we really want a big-government, high-tax solution? Do we really want higher investment taxes that would leave government bigger and private enterprise smaller? Do Americans really blame "rich" people? Or do they actually believe success is a good thing and should not be punished? Do rank-and-file working folks really want to do away with the secret ballot for unionization in the form of the so-called card check?

And if there is a three-house Dem sweep, won't Obama's middle-class tax credit be overturned in favor of even more government spending, just as Bill Clinton's plans were subverted back in 1993? The National Taxpayers Union says Obama's new spending will total $344 billion. That's a big number. One has to wonder if that's the opening bid or the final one.

The Obama economists sincerely believe that theirs is a growth program. Obama's advisors are friends of mine -- all of them terribly smart: Jason Furman, Austan Goolsbee, Robert Reich and Jarrod Bernstein. But I question their economic model. Raising marginal tax rates will minimize -- not maximize -- economic growth and jobs. Ditto for enlarging the size, scope and sweep of government.

Business cycles come and go. Each has its own set of excesses and subsequent corrections. It's the nature of free-market capitalism. But heavy-handed government solutions are being rejected worldwide, and it seems foolhardy for the United States to move away from economic freedom while the rest of the world is moving toward it.

John F. Kennedy was one of the greatest tax reformers of all time. He slashed marginal tax rates for businesses and people of all incomes, and the economy boomed in the 1960s. Reagan successfully emulated the JFK model in the 1980s and launched a 25-year boom. But are we turning back this supply-side model? I fear the Obama men are doing just that. And I think that fear is worrying the stock market.

John McCain's economic program is not flawless. And his advertisements bashing business and oil nearly reach the class-warfare level of Obama-Biden. It's a Big Mac mistake. McCain also lacks a solid tax-cutting program for the middle class.

But the Denver Dems didn't make the sale this week. Only Obama can do that -- and he faces a monumental task Thursday night.