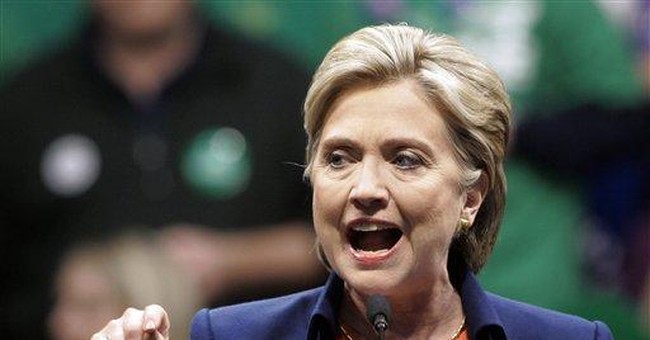 Allow me a dose of hardened market realism concerning Barack Obama’s landslide victory in Wisconsin. The race is over. Hillary Clinton is over. Her electability is over.

Bill Clinton’s political invincibility is over. The Clinton Restoration is over.

Obama got to the far left faster than Hillary did. He out-organized her, out-fundraised her, out-speechified her, out-hustled her, out-dressed her, and out-presidentialed her. He outbid Hillary for votes, one promised government check at a time. His 17-point margin of victory in Wisconsin was incredible. It says he can’t be stopped.

Outside of the whacko ultra-left Madison college population, which is even worse than the Ohio State population, Wisconsin is a lot like Ohio. And Ohio campuses will go for Obama. Think faculty voters, grimly determined for a left-wing takeover of America “from the bottom up,” to use the Saul Alinsky community-organizer phrase. As goes Wisconsin, so goes Ohio.

Not even Hillary’s last-minute bashing of business, free trade, and free-market capitalism -- which was a complete repudiation of her husband’s presidency -- could save her. Obama got there first, with a style and elegance that Hillary simply couldn’t match.

And it came out of nowhere. On the eve of the Wisconsin primary, Hillary did a hard-left imitation of John Edwards’s populist and demagogic soak-the-rich rhetoric. She trashed some of the greatest businesses in America -- oil, credit-card, insurance, and pharmaceutical firms. Wall Street and lending firms. It all must have come as quite a shock to the alumni of the Bill Clinton White House who are working for her campaign.

Robert Rubin may have been too busy tending to Citigroup’s sub-prime collapse to keep Hillary on the reservation. But where were Wall Street’s Roger Altman and Washington’s Gene Sperling when Hillary discarded the pinstripes for the polyester lefty-union pantsuit?

Bashing business comes naturally to Obama. But for Hillary it was a complete failure. Exit polls from Wisconsin say the trade protectionists went with Obama. Union members? Obama. People who think the economy’s in trouble? Obama. Folks who don’t think it’s in trouble? Obama. People making less than $50,000 a year? Obama. More than $50,000 a year? Obama.

And it only gets worse.

White women did in fact lean toward Hillary, by a small 52 to 47 percent margin. But Hillary only got 31 percent of the male vote while tying the female vote. White males? They went with Obama by a full 29 points.

Obama won both married men and women, and he tied on unmarried women -- a heretofore Hillary stronghold. Most likely to unite the country? Obama, by almost 30 points. Most interested in improving relations with the rest of the world? Obama, 56 to 40.

You think these trends are going to change in Texas, Ohio, and Pennsylvania? I don’t -- no matter what last-gasp neutron-negativism tactics the Clinton team employs.

Bash Obama for plagiarizing Deval Patrick? That negativism backfired. Go after Michelle Obama’s incredible anti-American speech? Women are coming ’round to Obama, so try again. Go super-negative over the next two weeks? That’ll mean Obama beats Hillary by 35 points instead of 20. Lift the sanctions on the Michigan and Florida delegates? That’s an Obama trump card. Bribe or rent the super-delegates? Make my day, Obama is thinking.

If Hillary wants to preserve her career as a professional politician her best bet is to pull back in Texas and Ohio as a prelude to withdrawal. Bill will say no, ’cause his career is even deader than hers. But Hillary has more class than her husband. She also has some vague sense of reality -- of the difference between right and wrong.

The Intrade pay-to-play prediction market showed Obama with a 10 point gain after Wisconsin, giving him an insurmountable 81 to 19 lead. It’s as if Hillary has suddenly become a steeply inverted yield curve, with a rapidly declining credit rating and a liquidity pool that’s quickly drying up. She won’t be able to raise two wooden nickels going forward. Not even Bill can raise enough money in Dubai to keep her out of bankruptcy.

The market has officially pulled the plug on Hillary, terminating her campaign. What’s left for her now is to muster some grace, humility, and character and begin the process of pulling out. To do otherwise will destroy the Democratic party, and what’s left of the Clintons’ badly tarred and tattered reputation.

Dozens of Democrats Are Worried About Biden Having Singular Authority to Order Use of Nuclear Weapons
Townhall
'PROVE US WRONG'! Steven Crowder calls down the THUNDER on Jack and Twitter for locking him over his ‘v*ter fr**d’ video
Twitchy
One Week on, Some Hints Have Emerged About the Future of Rush Limbaugh's Show
Redstate
The Morning Briefing: Biden's Creepy Mask Fetish Isn't a Real Plan to Manage COVID
PJ Media