If Kavanaugh Is 'Partisan,' Should We Impeach Justice RBG?

Larry Elder
|
Posted: Oct 11, 2018 12:01 AM
Share   Tweet
The opinions expressed by columnists are their own and do not necessarily represent the views of Townhall.com. 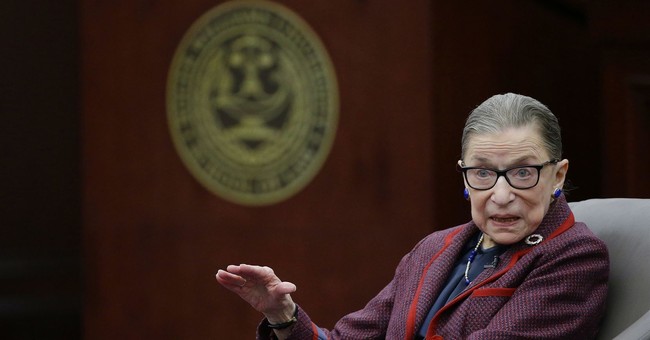 Forcefully responding to allegations of sex assault, Judge Brett Kavanaugh said in his confirmation hearing rebuttal, "This whole two-week effort has been a calculated and orchestrated political hit -- fueled with apparent pent-up anger about President Trump and the 2016 election, fear that has been unfairly stoked about my judicial record, revenge on behalf of the Clintons and millions of dollars in money from outside left-wing opposition groups."

This set off a brand-new argument against Kavanaugh, as his foes began proclaiming that he lacked the appropriate "judicial temperament" to join the Supreme Court.

Apparently, during the last 12 years as a judge on the country's second-most important court, Kavanaugh's judicial temperament was never a problem. Liberal pundits professed "shock" at Kavanaugh's "angry outburst." Is there something called, "The Playbook on Proper Demeanor When Accused Without Corroboration of Attempted Rape"? At stake was not just Kavanaugh's confirmation to the Supreme Court, but his entire livelihood. If, due to uncorroborated allegations of sexual assault, he had lost the confirmation, how could someone so tainted go back to work Monday morning as an appellate judge of the D.C. circuit court?

Retired Supreme Court Justice John Paul Stevens said: "I've changed my views (on Kavanaugh) for reasons that have no really relationship to his intellectual ability or his record as a federal judge. He's a fine federal judge. ... I think that his performance during the hearings caused me to change my mind. ... He has demonstrated a potential bias involving enough potential litigants before the court that he would not be able to perform his full responsibilities, and I think there's merit in that criticism. ... It's not healthy to get a new justice that can only do a part-time job. ... There are enough people who've been put in categories for which he would be unable to sit as a judge."

Approximately 2,400 law professors signed a letter, published in The New York Times, which argued that Kavanaugh's "intemperate, inflammatory and partial manner" rendered him unsuitable to become a Supreme Court justice. The professors said: "We have differing views about the other qualifications of Judge Kavanaugh. But we are united, as professors of law and scholars of judicial institutions, in believing that he did not display the impartiality and judicial temperament requisite to sit on the highest court of our land."

As to what Kavanaugh's so-called conspiratorial view says about his fitness for public service, does this concern extend to presidential candidates? Consider this infamous conspiratorial accusation: "The great story here, for anybody willing to find it and write about it and explain it," then-first lady Hillary Clinton said in 1998, "is this vast right-wing conspiracy that has been conspiring against my husband since the day he announced for president." As a presidential candidate in 2015, Clinton said, "The NRA's position reminds me of negotiating with the Iranians or the communists." To Democrats, Clinton's "conspiratorial world view" did not render her unacceptable as president.

To those who say Kavanaugh disqualified himself as an "impartial jurist," consider the "judicial temperament" of Supreme Court Justice Ruth Bader Ginsburg, a heroic figure to the left. In a July 2016 interview with The New York Times, Ginsburg said of candidate Donald Trump: "I can't imagine what the country would be with Donald Trump as our president" and that her late husband would have said it was "time for us to move to New Zealand."

Undaunted, Ginsburg later told CNN she considered Trump a "faker," adding: "He has no consistency about him. He says whatever comes into his head at the moment. He really has an ego. ... How has he gotten away with not turning over his tax returns? The press seems to be very gentle with him on that."

How's that for bias, judicial temperament and a blatant disregard for the expectation of impartiality? Ginsburg later apologized: "On reflection, my recent remarks in response to press inquiries were ill-advised, and I regret making them. Judges should avoid commenting on a candidate for public office. In the future, I will be more circumspect."

Kanavaugh apologized, too. In an opinion piece published in the Wall Street Journal days before his confirmation, Kavanuagh writes: "At times, my testimony -- both in my opening statement and in response to questions -- reflected my overwhelming frustration at being wrongly accused, without corroboration, of horrible conduct completely contrary to my record and character. My statement and answers also reflected my deep distress at the unfairness of how this allegation has been handled.

"I was very emotional last Thursday, more so than I have ever been. I might have been too emotional at times. I know that my tone was sharp, and I said a few things I should not have said. I hope everyone can understand that I was there as a son, husband and dad. I testified with five people foremost in my mind: my mom, my dad, my wife, and most of all my daughters."

Liberals see no basis for Ginsburg to recuse herself from cases involving Trump, despite her partisan attack. Will they extend Kavanaugh the same courtesy?