Larry Elder
|
Posted: Feb 15, 2018 12:01 AM
Share   Tweet
The opinions expressed by columnists are their own and do not necessarily represent the views of Townhall.com. 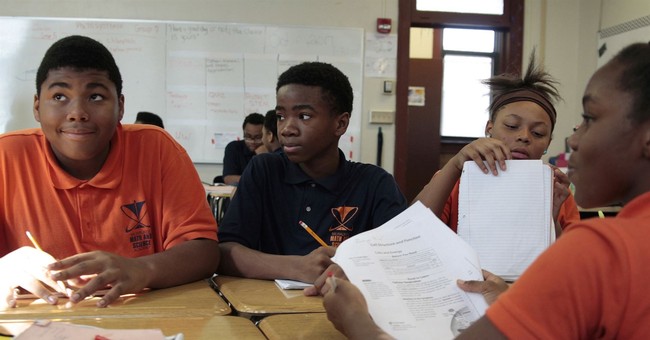 About slavery, do our mostly left-wing educators teach that slavery was not unique to America and is as old as humankind? As economist and author Thomas Sowell says: "More whites were brought as slaves to North Africa than blacks brought as slaves to the United States or to the 13 colonies from which it was formed. White slaves were still being bought and sold in the Ottoman Empire, decades after blacks were freed in the United States."

Are students taught that "race-based preferences," sometimes called "affirmative action," were opposed by several civil rights leaders? While National Urban League Executive Director Whitney Young supported a type of "Marshall Plan" for a period of 10 years to make up for historical discrimination, his board of directors refused to endorse the plan. In rejecting it, the president of the Urban League in Pittsburgh said the public would ask, "What in blazes are these guys up to? They tell us for years that we must buy (nondiscrimination) and then they say, 'It isn't what we want.'" A member of the Urban League in New York objected to what he called "the heart of it -- the business of employing Negroes (because they are Negroes)." Bayard Rustin was one of Martin Luther King Jr.'s key lieutenants and helped to plan and organize the civil rights march in D.C. that culminated in King's famous "I Have a Dream" speech. Rustin, an openly gay black man, also opposed race-based preferences.

Do our left-wing educators, during Black History Month, note that President Franklin Delano Roosevelt's celebrated New Deal actually hurt blacks? According to Cato Institute's Jim Powell, blacks lost as many as 500,000 jobs as a result of anti-competitive, job-killing regulations of the New Deal. Powell writes: "The flagship of the New Deal was the National Industrial Recovery Act, passed in June 1933. It authorized the president to issue executive orders establishing some 700 industrial cartels, which restricted output and forced wages and prices above market levels. The minimum wage regulations made it illegal for employers to hire people who weren't worth the minimum because they lacked skills. As a result, some 500,000 blacks, particularly in the South, were estimated to have lost their jobs. Marginal workers, like unskilled blacks, desperately needed an expanding economy to create more jobs. Yet New Deal policies made it harder for employers to hire people. FDR tripled federal taxes between 1933 and 1940. ... By giving labor unions the monopoly power to exclusively represent employees in a workplace, the (1935) Wagner Act had the effect of excluding blacks, since the dominant unions discriminated against blacks."

Are students taught that gun control, widely embraced by today's black leadership, began as a means to deny free blacks the right to own guns? In ruling that blacks were chattel property in the Dred Scott case, Supreme Court Chief Justice Roger Taney warned of that the consequences of ruling otherwise would mean that blacks would be able to own guns. If blacks were "entitled to the privileges and immunities of citizens," said Taney, "it would give persons of the Negro race, who were recognized as citizens in any one state of the union, the right ... to keep and carry arms wherever they went ... endangering the peace and safety of the state."

Are students taught that generations of civil rights leaders opposed immigration -- both legal and illegal immigration? After the Civil War, black abolitionist Frederick Douglass implored employers to hire blacks over new immigrants. Twenty-five years later, Booker T. Washington pleaded with Southern industrialists to hire blacks over new immigrants: "One third of the population of the South is of the Negro race. ... To those of the white race who look to the incoming of those of foreign birth and strange tongue and habits for the prosperity of the South: Cast down your bucket where you are. Cast it down among the eight millions of Negroes whose habits you know, whose fidelity and love you have tested in days when to have proved treacherous meant the ruin of your fireside."

About illegal immigration, an issue that nearly all of the today's so-called black leaders simply ignore, Coretta Scott King signed a letter urging Congress to retain harsh sanctions against employers who knowingly hire illegal workers. The letter said: "We are concerned ... that ... the elimination of employer sanctions will cause another problem -- the revival of the pre-1986 discrimination against black and brown U.S. and documented workers, in favor of cheap labor -- the undocumented workers. This would undoubtedly exacerbate an already severe economic crisis in communities where there are large numbers of new immigrants."

Share this on Facebook
Tweet
Biden Announces a 'Deal' on a Bill That Doesn't Exist Yet
Katie Pavlich
Former ATF Nominee David Chipman Blames This Reason for Why His Nomination Failed
Julio Rosas
Midterms Watch: Additional Polls Show GOP in Strong Position Ahead of 2022 Elections