Instead of 'Infrastructure Investment,' How About Killing Davis-Bacon?

Larry Elder
|
Posted: Jan 04, 2018 12:01 AM
Share   Tweet
The opinions expressed by columnists are their own and do not necessarily represent the views of Townhall.com. 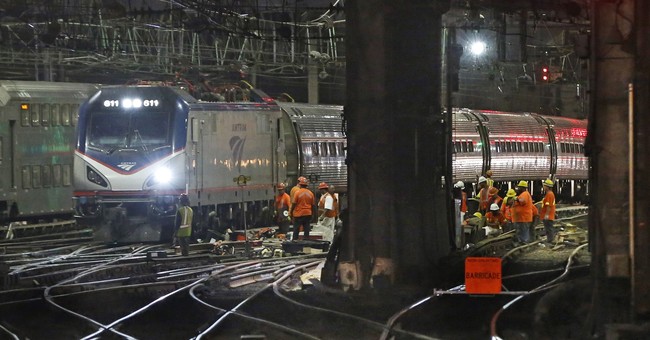 Is there a difference between President Barack Obama's "stimulus" and President Donald Trump's "infrastructure investment"? Despite costing $800 billion, most economists do not believe Obama's "stimulus" program did much stimulating. During the Great Depression, President Franklin Roosevelt's secretary of Treasury wrote in his diary that the New Deal spending, designed to rescue the economy, was not working. Treasury Secretary Henry Morgenthau wrote: "We have tried spending money. We are spending more than we have ever spent before and it does not work. ... I want to see this country prosperous. I want to see people get a job. I want to see people get enough to eat. We have never made good on our promises. ... I say after eight years of this Administration we have just as much unemployment as when we started and an enormous debt to boot!"

Trump, in announcing his upcoming plans for 2018, said: "Infrastructure is, by far, the easiest. People want it, Republicans and Democrats. We're going to have tremendous Democrat support on infrastructure, as you know. I could've started with infrastructure. I actually wanted to save the easy one for the one down the road. We'll be having that done pretty quickly."

What if, instead of spending more on infrastructure, the government began paying nearly 20 percent less for projects? And how about pushing privatization, where possible, over the inevitably more costly government spending?

The Davis-Bacon Act, a Depression-era measure, was designed to thwart black workers from competing against white workers. It requires federal contractors to pay "prevailing union wages." This act sought to shut out black workers from competing for construction jobs after white workers protested that Southern blacks were hired to build a Veterans Bureau hospital in Long Island, New York -- the district of Rep. Robert Bacon, one of the bill's sponsors. It is remarkable the Davis-Bacon still lives despite its racist intent and its discriminatory effect -- to this day -- on black workers. Passed in 1931, two Republicans teamed up to sponsor it.

In a labor market dominated by exclusionary unions that demanded above-market wages, blacks, at the time, competed by working for less money than the unionists. Davis-Bacon stopped this by requiring federal contractors to pay prevailing local union wages, causing massive black unemployment. Lawmakers made no secret of the law's goal.

In the House of Representatives, Congressman William Upshaw, D-Ga., said: "You will not think that a Southern man is more than human if he smiles over the fact of your reaction to that real problem you are confronted with in any community with a superabundance or large aggregation of Negro labor." Rep. Miles Clayton Allgood, D-Ala., supported the bill and complained of "cheap colored labor" that "is in competition with white labor throughout the country." Rep. John J. Cochran, D-Mo., stated that he had "received numerous complaints in recent months about Southern contractors employing low-paid colored mechanics getting work and bringing the employees from the South."

Davis-Bacon adds as much as 20 percent more to the cost of any federal project. And most states have enacted local Davis-Bacon laws that similarly jack up the price of those government construction projects.

This brings us to privatization. Why not encourage more projects to be built and run by the private market?

In California, for example, the Democratic governor pushes a "bullet train" that promises to benefit Los Angeles-to-San Francisco travelers. Yet the governor expects taxpayers to pay for at least part of this supposedly wonderful project. If it is predicted to be so profitable, why should taxpayers finance it?

Finally, it is not true that our gas tax has not kept pace with federal highway route expenses. From 1982 through 2014, federal gas tax revenues increased nearly 6 percent a year, according to the Cato Institute's Chris Edwards. He also points out that, beyond transportation and water, "most of America's infrastructure is provided by the private sector, not governments." "In fact," says Edwards, "private infrastructure spending -- on factories, freight rail, cell towers, pipelines, refineries, and other items -- is four times larger than federal, state, and local government infrastructure spending combined."

Businessman Trump is uniquely positioned to make the case not for more government spending but for less -- but more efficient -- spending. Obama's failed "stimulus" should serve as Exhibit A for what we ought not do. Trump should make the case to abolish Davis-Bacon, and for the privatization of as much infrastructure as possible.

So what's the difference between Obama's "stimulus" and Trump's "infrastructure investment"? Obama spent $830 billion in four years, while Trump says he wants to spend as much as $1 trillion in 10 years. Unless we kill Davis-Bacon and move toward more privatization, the answer may be no difference at all.