Larry Elder
|
Posted: Dec 01, 2016 12:01 AM
Share   Tweet
The opinions expressed by columnists are their own and do not necessarily represent the views of Townhall.com. 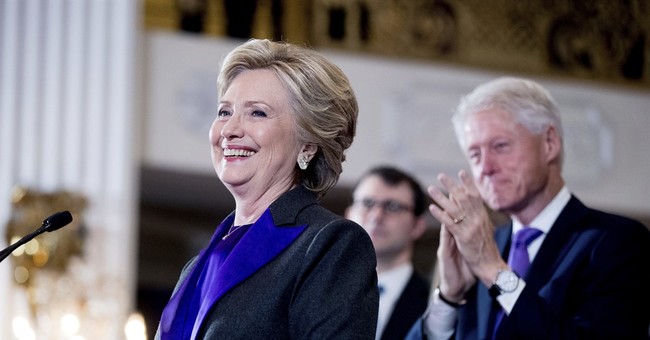 Trending
Every sane person expects Green Party candidate Jill Stein's attempt to overturn the election with her vote recount effort to crash and burn. Given this, why would the Hillary Clinton campaign file a motion in support of a Stein-initiated request for a hand vote recount in Wisconsin?

With the Democrats' Trump Derangement Syndrome already in full bloom, and the clowns at MSNBC practically drafting articles of impeachment of President-elect Trump, Hillary Clinton expects the Trump presidency to be a disaster, or at least to be quasi-credibly attacked as such -- which is the same thing. Health permitting, she's gearing up for another shot in 2020. In fact, it's inaccurate to say "gearing up." She never stopped.

As usual, Clinton can count on a big assist by the major media that, for example, slams Trump for claiming that non-citizens voted while giving Stein/Clinton the soft treatment as they make similar assertions. When Trump balked at agreeing to accept the election results, Democrats and their media colluders dismissed concerns about voting integrity as "baseless" and "unsubstantiated."

Buoyed by her popular-vote margin of some two million over Republican winner Donald Trump and his slender, combined 100,000-vote margin in Pennsylvania, Michigan and Wisconsin, Clinton no doubt feels that Clinton vs. Trump Round 1 was hers to lose. Next time, better advisers. And no more taking the Midwest for granted.

Stein's recount effort will not produce enough votes to change the outcome, but it will feed the narrative that Trump is an interloper, elected by "outside interference" or some other dark possibility. Credibility is irrelevant as long as it feels true to enough non-Trump voters. Only in America can Stein lavish praise on dictator Fidel Castro, who ran unopposed, while protesting the legitimacy of Trump's victory.

Sure, Clinton blasted Trump for asserting, during the last pre-election debate, that he would not commit to accepting the election results: "That's horrifying. You know, every time Donald thinks things are not going in his direction, he claims whatever it is is rigged against him. ... This is? -- ?this is a mindset. This is how Donald thinks. And it's funny, but it's also really troubling. So that is not the way our democracy works. We've been around for 240 years. We've had free and fair elections. We've accepted the outcomes when we may not have liked them. And that is what must be expected of anyone standing on a debate stage during a general election. ... Let's be clear about what he is saying and what that means. He is denigrating -- he is talking down our democracy. And I am appalled that someone who is the nominee of one of our two major parties would take that position."

But that was so October.

"Jill Stein is taking advantage of an existing provision in the law that allows you to ask for a recount and pay for it within a certain period of time," said Coons. "Donald Trump is undermining the whole concept that this was a free and fair election by suggesting that literally millions of illegal votes were cast for which there is absolutely no evidence."

"But," said Blitzer, "you would have been adamantly opposed to it if Donald Trump had lost the election and Hillary Clinton won and he was doing what she is doing right now."

"We were concerned," explained Coons, "what Donald Trump might do is refuse to accept the results, and challenge them -- not the way Jill Stein is doing within the boundaries of the law and within a time and process set out -- but by simply refusing to accept the results and inciting his supporters around the country." In other words, had Trump questioned the results, he would have gathered up a mob and passed out pitchforks, knives and guns. Stein uses lawyers.

As for Clinton's role in all of this, with apologies to Sarah Palin, she can see November 2020 from her Chappaqua front porch.