Larry Elder
|
Posted: Aug 25, 2016 12:01 AM
Share   Tweet
The opinions expressed by columnists are their own and do not necessarily represent the views of Townhall.com. 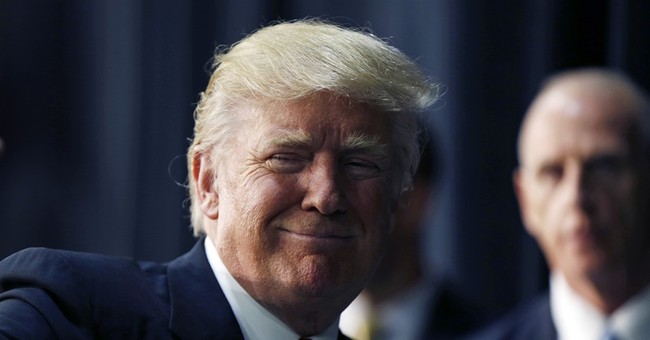 Trending
"Do you ever get tired of defending Donald Trump?" a critic asked.

It isn't that Donald Trump does not say things that are cringe-worthy. It's that his opponent, Hillary Rodham Clinton, says and does things even more cringe-worthy. So forgive those who feel that Trump's supposedly "outrageous" statements are nothing more than selective outrage, double standards, and the typical "Republicans are racist" meme. Democrats routinely say vulgar, bigoted, divisive, outrageous things while getting a toll-free pass.

It wasn't Donald Trump, but Donna Brazile, then Al Gore's campaign manager, who said Republicans have a "white-boy attitude."

It wasn't Donald Trump, but Democratic Sen. Claire McCaskill of Missouri, who said, after Hurricane Katrina, "George (W.) Bush let people die on rooftops in New Orleans because they were poor and because they were black."

It wasn't Donald Trump, but Vice President Joe Biden, who, before a mostly black audience, criticized then-Republican presidential candidate Mitt Romney and Republican resistance to Wall Street regulation, saying: "He's going to let the big banks once again write their own rules -- unchain Wall Street! They're going to put y'all back in chains!"

It wasn't Trump, but then-Sen. Hillary Clinton, who told a black church audience, "When you look at the way the (Republican-majority) House of Representatives has been run, it has been run like a plantation -- and you know what I'm talking about!"

It wasn't Donald Trump, but Debbie Wasserman Schultz, then the chair of the Democratic National Committee, who said that Republicans "want to literally drag us all the way back to Jim Crow laws." She also said, "The focus of the Republican Party on turning back the clock for women really is something that's unacceptable and shows how callous and insensitive they are towards women's priorities." And just last month, she tweeted, "Donald Trump and the GOP want to turn back the clock on civil rights and women. We won't allow it."

It wasn't Donald Trump, but Howard Dean, then-chair of the DNC, who referred to the Republican Party as "the white" party.

This brings us to one of Trump's most recent alleged "outrages." During a campaign speech, Trump warned that Clinton's election could mean several more left-wing justices on the Supreme Court, threatening the individual right to keep and bear arms. After all, in the 2008 Heller decision, four justices supported regulation that came very close to outlawing the home possession of a firearm. At a fundraiser last year Clinton said, "We've got to go after this. ... the Supreme Court is wrong on the Second Amendment. And I am going to make that case every chance I get." Later a top Clinton adviser said, "Clinton believes Heller was wrongly decided." Doesn't all of this explain why Second Amendment supporters are worried and confused?

The reaction was swift. Sen. Chris Murphy of Connecticut sent out several tweets. Tweet No. 1: "Casual reading assignment tonight: federal criminal statute on threatening to kill a candidate for President." Tweet No. 2: "Was (Donald Trump) suggesting his supporters shoot Hillary? Shoot her nominee? Who knows. It's all so disgusting and embarrassing and sad." Tweet No. 3: "This isn't play. Unstable people with powerful guns and an unhinged hatred for Hillary are listening to you, (Donald Trump)." Tweet No. 4: "Don't treat this as a political misstep. It's an assassination threat, seriously upping the possibility of a national tragedy & crisis."

It takes some kind of mind to interpret that as a call to urge supporters to murder Clinton. But the media was already off and running with its storyline: Trump, if he lost the election to Hillary, had urged supporters to kill her.

So, for your convenience, here is the Media Trump Translator:

Trump: "Good morning." Media translation: "It's a great day to organize a posse and burn down mosques!"

Trump: "Nice tie." Media translation: "Your granddaughter should be beheaded!"

Trump: "How are you?" Media translation: "I pray that your wife gets ovarian cancer."

Trump: "How about that Michael Phelps?" Media translation: "May your sister get raped by an ISIS lieutenant with the Zika virus."

Trump: "It's raining cats and dogs." Media translation: "As president, I will force-euthanize all family pets."

The good news is that there are less than 90 days to go before election time. The bad news is that the Trump pile-on increases the odds of Hillary Rodham Clinton becoming the next president.