Harry Reid Apologizes to Blacks for ... What? 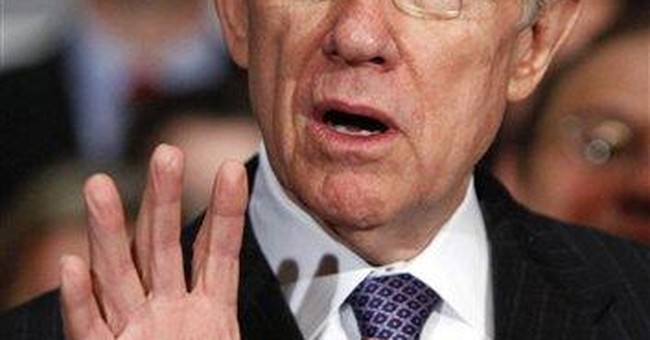 According to a new book about the '08 presidential campaign, Reid, the Senate majority leader, said that then-Sen. Barack Obama appealed to voters as a "light-skinned" black man with "no Negro dialect" -- that is, "unless he wanted to have one." Egad!

Faster than you could say "Tawana Brawley," "civil rights leader" Al Sharpton popped up on Fox News Channel to pronounce himself "offended" but willing to accept Reid's apology. The host exercised commendable restraint in not bringing up the time Sharpton, the moral arbiter of all things offensive to blacks, called a black former mayor of New York a n----- whore. But let us stay focused.

Don't tase me, bro! said Reid. He quickly apologized. No "my remarks were taken out of context" or "what I meant was" or charges of "tabloid journalism." He just apologized -- to President Obama, to members of the Congressional Black Caucus -- to everyone, it seems, except the light-skinned Tiger Woods, who is apparently taking no one's calls. Luckily, Reid found Obama in a more magnanimous mood than the President was when -- during the Great Harvard Professor Racial Profiling Case -- he accused the Cambridge police of acting "stupidly." Timing (and party affiliation) is everything.

Reid went to school on the way former Senate Republican leader Trent Lott handled his "racially insensitive" remarks. Lott, on the 100th birthday of Sen. Strom Thurmond in 2002, praised the elderly former segregationist and said America would have been a better country had Thurmond won the presidency in 1948. Republican racism yet again unmasked!

Critics rejected the explanation that Lott was simply trying to flatter an old man. Even Republicans, squirming like global warming alarmists trying to explain away record cold temps, dumped him. Lott's remarks symbolized nothing short of a Klan revival meeting. Lott apologized, apologized and apologized. He even did a perp walk on Black Entertainment Television, where the host asked the chastened Lott, "Will you take a closer look at the people you align yourself with?" Lott practically agreed to raise his hand before using the restroom. Goodbye leadership position.

To avoid the same fate, Reid followed the path of former Air Force Academy football coach Fisher DeBerry: Apologize -- early and often -- and let others decide what, exactly, you are apologizing for. After a lopsided loss during the 2005 season, DeBerry said, "(Our opponent) had a lot more Afro-American players than we did, and they ran a lot faster than we did." Unleash the hounds!

DeBerry's athletic director criticized him for making a "seriously, seriously inappropriate comment. ... This was not Fisher DeBerry, not the man I've known for 25 years." Why, the Air Force "has a zero-tolerance policy for any racial or ethnic discrimination or discrimination of any kind." Oh, sure, a black Air Force player said, "We, as a team, didn't think he meant anything by it. ... I personally wasn't offended." And a white teammate said, "There are 250 guys on the team, and there is not one player that was offended." But still ...

DeBerry held a news conference. "I realize the things I said might have been hurtful to many people," he said, "and I want everyone to understand that I never intended to offend anyone." So far, so good. "I have made a mistake, and I ask for everyone's forgiveness," he continued.

OK. But what exactly, asked the reporters, was he apologizing for? Is it wrong to say blacks run fast? "I don't think there is anything wrong with that," DeBerry replied. Oops. "We have some Caucasian players that run very, very well, also." Uh-oh. Sensing danger, the athletic director stepped in. "What we're talking about is speed," offered the AD. "There's speed that cuts across black, white, gray, blue, whatever." Huh? "It was just an inappropriate comment, and you all know it was an inappropriate comment." Racial insensitivity, understand, is like what a Supreme Court justice once said about smut. You know it when you see it.

"Negro"? The term is on this year's census. What about the United Negro College Fund?

"No Negro dialect, unless he wanted to have one"? Last January, National Public Radio interviewed black Obama supporter and linguistics professor John McWhorter. He said: "(Obama) is a very bidialectal person. ... He can talk in a way where you would not know that he was black over the phone. ... But then, especially when he talks to a black audience, he can sound quite a bit like (Martin Luther King colleague) Rev. Lowry sounded at the inauguration."

Now, if Sen. Reid wishes to apologize for something real -- such as the budget-breaking abomination of ObamaCare or his shady self-enriching Nevada real estate deals -- I'll take the call.

The Hispanic Voter Dam Is About to Break and Democrats Are Not Ready for It
Townhall
Thou shalt not tell the truth: @FearTheFloof has vanished from Twitter after his thread about privileged backgrounds of wealthy lib journos
Twitchy
John Fetterman Gets Pummeled by an Unexpected Source
Redstate
Here's What Happened When a Concerned Mom Dressed Like Drag Queen at a School Board Meeting
PJ Media