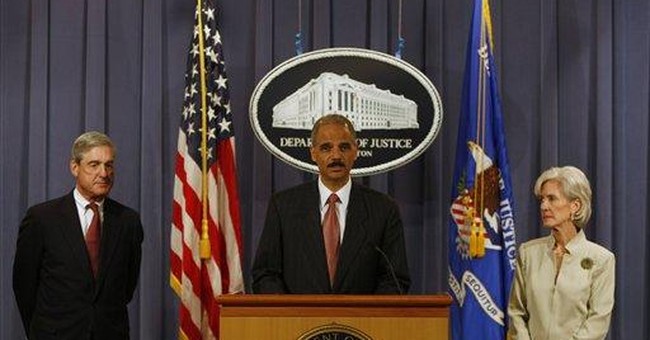 Last week's article on why 45 million Americans go without health care insurance touched a nerve and generated many questions and assertions:

"You and your pesky statistics! Forty-five million Americans without health care is huge. And you wrote that 89 percent of the 85 percent of people with health insurance are satisfied. That means 25 percent of all Americans are unsatisfied!"

Elder: Those "pesky" statistics become especially pesky when misstated. I wrote that 45 million Americans have no health insurance, leaving 85 percent with health insurance -- but not without health care. ERs must treat the uninsured, including illegal residents. Meanwhile, 89 percent of Americans -- with or without insurance -- are satisfied with the quality of their own health care.

And as for the remaining 11 percent -- to what degree and for what reason are they "dissatisfied"? Had bad experiences? Don't like having copays? Would prefer a complete choice of doctors but are restricted by their plans? Had to wait for appointments or sit too long in waiting rooms? (Canadians are used to eight-month-or-more waits and long lines. Americans, I assure you, are not.) A lot of people simply complain -- about most everything.

For example, 10 years ago I had laser eye surgery. I filled out a questionnaire designed to determine how fastidious I am. Why? The doctor told me the surgery would not get me 20/20 vision. Was I OK, the doctor asked, with a less than 20/20 result? I was. He said some prospective patients, however, are dissatisfied with such a result. Given their -- in his view -- unrealistic expectations, the doctor wouldn't treat them.

Elder: Not exactly. Large numbers of Canadians came (and still come) to America to avoid waiting for MRIs or to get time-sensitive treatment that couldn't wait. Canada is moving toward more privatization -- which was previously illegal in Canada but is now permitted as a result of a successful lawsuit. Imagine having to sue to spend your own money in a voluntary transaction between two parties! According to a 2007 survey by the Canadian Fraser Institute, the median wait time in Canada between visiting a general practitioner and receiving treatment was more than 18 weeks -- and up to 38 weeks for procedures such as orthopedic surgery.

"What's wrong with a government-provided alternative plan to keep the insurance companies honest and more competitive?"

Elder: Here's a recent example of what happens when government sets up "alternative" plans to cover the uninsured at (supposedly) lower costs. Hawaii offered universal child health care -- for seven months. Then it dropped the plan. Why? People (and employers) with private plans dumped them to ride the "cheaper" government train. One of Hawaii's health care administrators lamented, "I don't believe that was the intent of the program." And Hawaii is a small state, without nearly the number of "health insurance needy" as we have on the mainland.

"Come on! Obviously the American health care system IS broken! That's why our life expectancy is so much lower and our infant mortality rate is so much higher than in other countries."

Elder: Ezekiel Emanuel, a medical adviser to the President (and brother of Rahm, the chief of staff), once told me, "Life expectancy is one of the dumbest ways to measure the quality of a nation's health care." Quality of medical care does not -- by itself -- determine life expectancy. For example, deaths from accidents and murders are much higher in America than in other developed countries. Texas A&M health economist Robert Ohsfeldt and health economics consultant John Schneider calculated that if accidental deaths and homicides during the '80s and '90s were removed from the calculations, life expectancy in America would have ranked at the top of all developed countries. What about personal behavior? Obesity leads to serious health problems, including heart disease. One-third of Americans are obese -- almost 50 percent more than the British and Australians, over 100 percent more than the Canadians and Germans, about 250 percent more than the French and 1,000 percent more than the Japanese.

So don't blame the "broken health care system" for lower life expectancies. American health care actually helps us cope with the consequences of unhealthy lifestyles, keeping our ranking from being even lower.