Obama: The Charming Menace to Peace and Prosperity 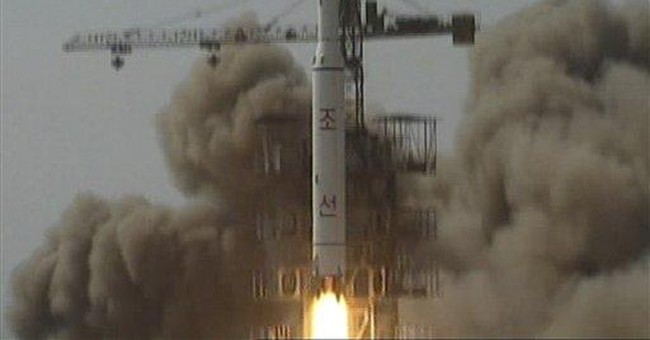 Numb. At some point, that's about how one feels, isn't it?

Didn't rogue nuclear power North Korea, in violation of yet another United Nations resolution, test-fire a long-range missile? Didn't this occur while President Barack Obama delivered a speech on nuclear disarmament? Isn't North Korea the same country that helped Syria build a nuclear reactor, showing North Korea's clear intention to sell and export its nuclear technology? And in response, didn't the President call for the United Nations Security Council -- the one that provides Russia and China with a veto -- to … take action?!

Did the traditional media, in full praise over Obama's "successful" European tour, note that he failed to secure anything of substance? After all, getting more buy-in from the Europeans for the war in Afghanistan was the President's most important objective. And our allies agreed to send 5,000 more personnel to Afghanistan. But wait. The promised deployment consists of police and trainers to be sent on a temporary basis and kept out of harm's way. The United States, Canada and Great Britain, therefore, continue the heavy lifting. And since 9/11, most NATO countries spend less on defense as percentages of their GDPs than before.

Didn't the president fire the CEO of General Motors? With polls showing opposition to bailing out the automakers, the President dumped CEO Rick Wagoner, the 30-plus-year General Motors lifer. Wagoner's long GM career means that he walked the halls while GM continually made decisions that lost money and market share. His replacement checks in with 25 years' experience at General Motors. So the President, praised by the media for his "get-tough" approach with the automakers, swapped a GM lifer with a GM lifer.

And where are the connect-the-dots conspiracy nuts when you need them? During the Bush administration, critics spoke of the "unholy alliance" between Bush and "Big Oil." They attacked Vice President Dick Cheney for an alleged unholy alliance with Halliburton, the company Cheney once ran. Neither the oil companies nor Halliburton received taxpayer "bailout" money -- unlike the banks.

What of the Wall Street bailout recipients' connections to Treasury Secretary Tim Geithner? Until recently, former Clinton Treasury Secretary Robert Rubin -- a mentor of Geithner's -- served for a decade as senior adviser and member of the board of directors at Citigroup. During that time, the company got deeply involved with those fancy derivatives now known as "toxic" assets. Rubin's former firm has received -- so far -- $50 billion from taxpayers.

This brings us to Obama's top economic adviser, Lawrence Summers. Summers, in 2008, earned $5.2 million in compensation from hedge fund D.E. Shaw and more than $2.7 million in speaking fees -- a lot of that from financial institutions now receiving bailout money. Obama blames the financial meltdown on greed and the lack of regulations. But Summers, while secretary of Treasury under Clinton, publicly defended unregulated, free market derivatives.

Didn't presidential adviser David Axelrod, following former Vice President Dick Cheney's criticism of Obama's changes to fighting the war on terror, call Cheney "unstatesmanlike"? Cheney, appearing on a news show, calmly explained why he feels that Obama's approach makes the country less safe. Cheney -- along with the majority of Americans -- objects to the closing of Guantanamo Bay. He opposes restricting interrogation techniques to the U.S. Army Field Manual and the closing of secret interrogation sites. Unstatesmanlike?

Does Axelrod, to compare Veeps with Veeps, recall former Vice President Al Gore's angry, almost-unhinged attacks on President Bush? "He played on our fears!" screamed Gore during a speech -- as opposed to during an interview, when he might (as did Cheney) have rationally explained his differences and objections. Unstatesmanlike?

Didn't the President, with a straight face, promise to reduce the deficit by half in five years? The Congressional Budget Office forecasts government spending over the next 10 years will quadruple the annual deficit of Bush's presidency. The CBO expects the nation's debt to double in five years and triple in 10.

But according to The Heritage Foundation, Obama's claim of "$2 trillion in savings over the next decade" is "simply not true. His budget increases spending by $1 trillion over the next decade, which he attempts to offset by reclassifying as 'savings' $1.4 trillion in tax increases and $1.5 trillion in reduced spending in Iraq." First he describes tax increases as "savings." Then he falsely projects spending on the war in Iraq to remain high. By manipulating "future spending," Obama can then "reduce it" and pronounce it "savings."

Obama seeks to replace entrepreneurs with bureaucrats. He emboldens our enemies, who interpret his words of outreach and humility as signs of weakness. His actions -- while well-intended -- represent a menace to the continued security and prosperity of this nation. He smiles. He reproaches America. And much of the "world community" applauds.

But many of us just become … numb.