Israelis and Palestinians: Who's David, Who's Goliath? 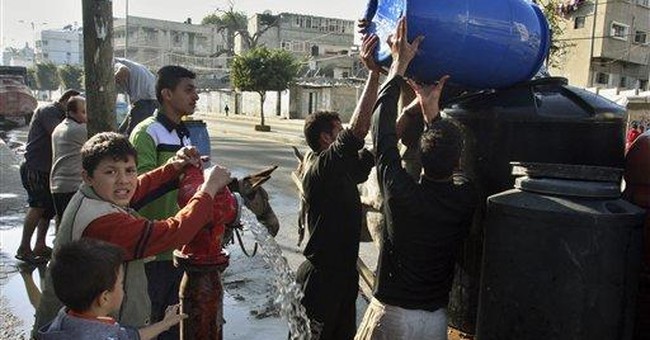 Much of the world buys the line -- peddled by the Palestinians and the Arab Muslim world and, indeed, many Western countries -- that paints Israel as the bad "Goliath" that "stole" the land from the "Palestinians."

Israel gave Gaza self-rule in 1994, unilaterally withdrawing the last of its citizens and soldiers from Gaza in 2005. Hamas, voted into power via free elections in 2006, fought and defeated their political and military rival, Fatah, to seize de facto control of Gaza in 2007. In the past eight years, Hamas has fired more than 10,000 rockets and mortars into Israel -- 7,000 of them after Israel's 2005 withdrawal. With improved technology -- reportedly assisted by Iran -- Hamas' rockets can now fly 24 miles before impact and explosion, thereby threatening, injuring and killing more and more Israelis living in southern Israel.

But why the "disproportionate" response by Israel? Reportedly, more than 600 Palestinians have been killed, some civilians. Set aside for the moment that Hamas' charter specifically calls for the "obliteration" of the state of Israel. And set aside the fact that the Palestinian "militants" fight in heavily populated areas, assuring, indeed encouraging (for PR purposes) civilian casualties.

We turn our attention to the "stolen" allegation.

Israel lies in the ancient Fertile Crescent's southwest corner, with some of the oldest archeological evidence of primitive towns and agriculture. Historians and archeologists believe the Hebrews probably arrived in the area in the second millennium B.C. The nation itself was formed as the Israelites left Egypt during the Exodus, believed to be in the late 13th century B.C.

The 12 tribes of Israel united in about 1050 B.C., forming the Kingdom of Israel. David, the second king of Israel, established Jerusalem as Israel's national capital 3,000 years ago. Jewish kingdoms and states existed intermittently in the region for a millennium.

After conquests by Babylonians, Persians and Greeks, an independent Jewish kingdom was briefly revived in 168 B.C., but Rome took control in the next century, renaming the land of Judea "Palestine" after the Philistines, historical enemies of the Israelites'.

Invading Arabs conquered the land from the Eastern Roman Empire (Byzantines) in A.D. 638 and attracted Arab settlers. Within a few centuries, the Arab language and Islam prevailed, but a Jewish minority remained. After a brief period of prosperity, waves of invasions and changes of control followed, including rule by the non-Arab empires of the Seljuks, Mamelukes and European crusaders, before becoming part of the Ottoman Empire from 1517 until 1918.

The crusaders massacred thousands of Jews, along with Muslims, in the 11th century. But soon thereafter, European Jews established centers of Jewish learning and commerce. By the time the Ottoman Turks occupied Palestine in the 16th century, according to British reports, as many as 15,000 Jews lived in Safed, which was a center of rabbinical learning. Many more Jews lived in Jerusalem, Hebron, Acre and other locations. By the middle of the 19th century, Jews constituted a significant presence -- often a majority -- in many towns.

Still, in the 19th century, the Holy Land looked mostly like a vast wasteland. When Jews began to return to their "promised land" early in the 20th century, the desert literally began to bloom under their industry. Arabs followed, coming in large numbers for the jobs and prosperity.

After four centuries of Ottoman rule, Britain took the land in 1917 and pledged in the Balfour Declaration to support a Jewish national homeland there. In 1920, the British Palestine Mandate was recognized. A declaration passed by the League of Nations in 1922 effectively divided the mandated territory into two parts. The eastern portion, called Transjordan, would later become the Arab Kingdom of Jordan in 1946. The other portion, comprising the territory west of the Jordan River, was administered as Palestine under provisions that called for the establishment of a Jewish homeland.

The United Nations, in 1947, partitioned the area into separate Jewish and Arab states along meandering and indefensible boundaries. The Arab world, insisting that any Jewish claim to Palestine was invalid, staunchly refused to compromise or even discuss the subject.

When Israel's independence was declared in 1948, Arab forces from Egypt, Transjordan, Syria, Lebanon and Iraq combined to crush the 1-day-old country. They lost. Still, Egypt occupied most of the Gaza Strip, and Transjordan (calling itself "Jordan") held most of the West Bank and half of Jerusalem. Neither Arab country gave the "Palestinians" a state.

Israel won more land after a series of wars, land since returned or offered for return in exchange for peace. The Jews "stole" nothing.