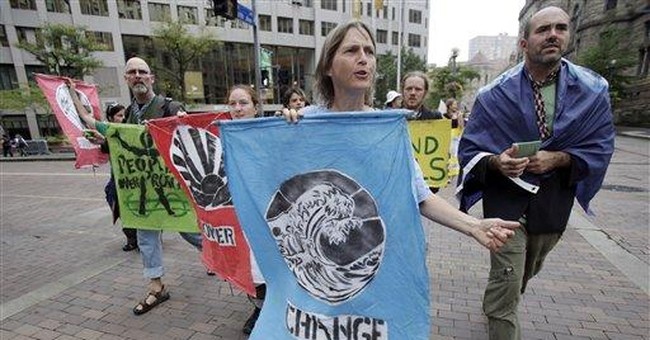 Mother Jones calls her “Professor Occupy.” She was the brains behind the violent 1999 World Trade Organization protests in Seattle.

Now, Lisa Fithian – a self-described anarchist – has brought her tactics to Michigan, where the unions are prepping for a massive demonstration Tuesday as the legislature gives final passage to Right to Work legislation.

EAGnews exposed Fithian when she popped up in Chicago last year to organize the Chicago Teachers Union during the height of the silly but dangerous Occupy protests.

But strangely, the Associated Press didn’t mention Fithian’s track record in a story it published on Sunday. In fact, despite being an avowed anarchist, the AP simply referred to Fithian as a “community activist.” And the story led readers to believe the protesters may be the victims.

“More than 200 activists attended training Saturday in preparation for a protest at the Michigan Capitol, where lawmakers are putting the final touches on legislation that would allow workers to stop paying union dues.

“Between chants, cheers and applause, organizers warned those at the training to be prepared for insults and obstruction Tuesday in Lansing. The volunteers lined up on opposite sides of a long hall at UAW Local 600 in suburban Detroit and took turn turns portraying protesters and union critics.

“’Humanize the situation. Be clear with your intentions. Introduce yourself,’ national labor activist Lisa Fithian, of Austin, Texas, said through a megaphone. ‘They're going to do everything they can to criminalize us.’”

“We are not the violent ones,” Fithian is quoted as saying.

During the 1999 WTO protests in Seattle, damage to businesses from vandalism cost an estimated $20 million. That was Fithian’s handiwork.

Fithian is a very dangerous person to be bringing to Michigan at the moment. Someone with her track record and skills could take a tense situation and quickly turn it into a riot.

People of good will are left to hope that nobody gets seriously hurt, all because some rabble-rousing anarchist comes to town and throws gasoline on a smouldering fire.

Fithian may consider violence a necessary tool in her effort to perpetuate a world revolution, but the people of Michigan deserve much better.