You Say You Want a Civil War?: An Interview with Historian and Novelist H. W. Crocker III

Kurt Schlichter  |  Sep 20, 2022
The opinions expressed by columnists are their own and do not necessarily represent the views of Townhall.com.
Top Columns
Trending on Townhall Media 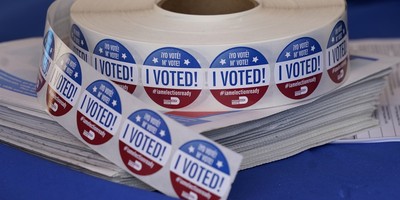 Harry Crocker and I go way back, to our undergraduate days at UC San Diego where he was a founder of the conservative student newspaper, the California Review, that I later helped edit. Harry has been a journalist, a political speechwriter for California Governor Pete Wilson, a longtime editor of bestsellers at Regnery Publishing (Full Disclosure: Including mine), and, most important, a popular military historian and novelist. His latest book, launching Tuesday, September 20, 2022, is Armstrong and the Mexican Mystery, the final installment in a trilogy that includes Armstrong and Armstrong Rides Again!, a highly praised series about George Armstrong Custer surviving the Battle of the Little Bighorn and fighting bad guys around the world, under the assumed name of Marshal Armstrong Armstrong. As a former cavalry commander myself, though with nowhere near as fabulous hair as Custer, I had to learn more:

HC: Well, as you would expect, he ends up fighting a war—a flat out war—to save America and Western Civilization, but it starts out innocently enough with a mysterious gunman meeting him in a club and inviting him to join an expedition to find a lost treasure in Mexico.

KS: That’s literally how most of my own adventures began. So, what can we expect?

HC: Gunfights all along the way. Laughs too, I hope.

HC: Yes, he was “the Boy General” of the Union army—last in his class at West Point, but promoted general at the age of 23. He was audacious, plucky, and courageous.

KS: People right now see parallels with the past, like Democrats once again treating people badly and spurring conflict. Are we close to a civil war right now? Everyone’s talking about it.

HC: Several years ago, I wrote an essay that went viral. It was titled “America’s Next Civil War Will Be Worse than Our Last.” The reason is simple: in 1860 Americans North and South worshipped the same God, venerated the same Constitution, and even, you know, shared the same definition of a woman. That’s not true today. My Custer novels are partly about this—about the reconciliation of North-South. Custer is a great character because he fought for the North, but he liked Southerners. He even attended a Confederate officer’s wedding during the war!

KS: Cancel him! But seriously, are we close to fighting again?

HC: No. I think you and I agree. It’s possible, but we should avoid it—and we can avoid it. You warn, in your novels, by looking to the future. I warn, in my novels, by transporting today’s issues into the past, disguising them in nineteenth century costumes.

KS: My family’s home town of Gettysburg was burned by Confederates. My grandmother, who had a picture of Lincoln on her wall in the seventies, knew Civil War veterans. This a seismic event in American history. What’s changed in our society’s view of the Civil War?

HC: Just about everything. In fact, I would say it’s one of the most dramatic changes I’ve seen in my 60-plus years. You used to have mainstream, liberal historians—like Henry Steele Commager and Samuel Eliot Morison—who sympathized with the Confederacy, even as they praised Abraham Lincoln. Their common, patriotic view—and this went all the way down to the popular culture—was that the Civil War was America’s Iliad, with noble combatants on both sides. Grant and Lee, Phil Sheridan and Stonewall Jackson, Custer and J.E.B. Stuart—they were all American heroes. That’s not the view today, of course. Today, we’re told, it’s slave-holding racists on the one hand, and Indian-fighting blue coats on the other.

KS: Notably, after the Civil War, it was veterans on both sides who led the reconciliation. It seems odd that twenty-first century college kids are presuming to hold a grudge when the men in the firestorm buried the hatchet. Strategically, today America is a different nation. Then geography made it relatively simple for the South to secede. It’s not so simple now with Blue urban areas and Red everywhere else, is it?

HC: No, it’s not; and if you’re an optimist maybe that’s a good thing. I’m sure we all have moments when secession – some label it a “National Divorce” – looks awfully attractive because we Reds just want the Blues, the Dems, the Wokesters to leave us alone. But we don’t want to fight our neighbors—at least not most of them. Lee and many other famous Confederates were secessionists only after the fact, after their states left the Union. They couldn’t imagine turning their swords against their home states, their families, their neighbors. That made the Civil War the tragedy it was – one we must never repeat.

KS: Speaking of Lee, the South had an aristocratic military tradition—and the South eventually lost. Red America is better-armed and has more pro-military values, but is that enough, if it came to blows?

HC: Military prowess was the South’s one advantage. Everything else—from industry to capital to you name it—the North had the upper hand. It’s important to own the institutions—not only because government is supposed to have a monopoly on the legal use of violence, but because most people still take their opinions from institutions. That’s why winning the cultural war—heck, winning elections—can help forestall a real war.

KS: And by winning the culture war, you mean that people should buy our books?

HC: Well, it all begins with culture: who your heroes are, what your reference points are, what virtues you uphold. Making America great again—making America normal again—means we must win culturally, politically, and every other way. I reckon buying our books is a vote for the right side.

Conservatives Must Fight Back Against the Radical Left. Join Townhall VIP, Support Our Reporting, And Check Out Last Week's Stream of Kurtiousness, They Are Lying to You, and my podcast, Unredacted.

Get my just released non-fiction book We’ll Be Back: The Fall and Rise of America, but don’t forget my Kelly Turnbull series of conservative action novels set in America after a notional national divorce. The latest is The Split, but get all these action-packed bestsellers, including People's Republic, Indian Country, Wildfire, Collapse, and Crisis! Plus, keep up the fight by joining Townhall VIP, including an extra Wednesday column, my weekly Stream of Kurtiousness video, and the Unredacted podcast!