Kurt Schlichter  |  Jul 26, 2021
The opinions expressed by columnists are their own and do not necessarily represent the views of Townhall.com.
Top Columns
Trending on Townhall Media 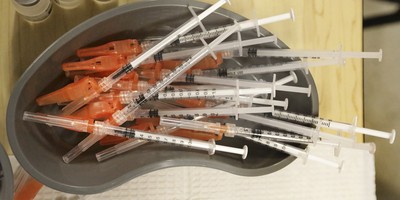 You gotta love the lib reporters meekly accepting the delicious iron discipline of black-clad Mistress Psaki as she demands “Why do you need to have that information?” when asked about the number of infectos in the petri dish that is the * White House. The only way that kink-fest could have been more on the nose with regard to who our esteemed journalismers actually are is if her severe black outfit was vinyl. Apparently, getting flogged by the Democrat dominatrix turns their collective crank because they just took it. They always just take it. And our Fourth Estate will eagerly beg for more.

Now, it’s not even the gross double standard at play here that’s significant – imagine the fussy fury of the lib-simps if one of Trump’s vanilla spokespeople publicly abused them like that. We’ve learned that the lib-press is immune to shame, at least the kind that comes from having their rank hypocrisy exposed by conservatives. No, it’s that when their Dem domme cracks the whip, they just take it, meekly, obediently, like the groveling submissives they are.

Someday, someone will look back on this pathetic abdication of the media’s dignity and write a history of how the ink-stained wretches of the past became the craven conformists of today, and how now they revel in their own subjugation. Call it 50 Shades of the Gray Lady; when you read the hot scene in the forbidden White House press playroom at page 247, you’ll want to draw a warm bubble bath, light a lavender-scented candle, and pour yourself a goblet of Trader Joe’s screw-top chardonnay. Grrrrrrrr.

Imagine being these people. You can’t? Okay, then take a shot of Dickel Rye and try again to imagine being these people. They all grew up wanting to be the crusading Woodward and/or Bernstein – who themselves were less ace reporters than eager conduits for a disgruntled bureaucrat hack who exploited the callow correspondents to settle his personal scores – and instead they grew up to be the Gimp in the less interesting version of Pulp Fiction that is the DC milieu.

They aren’t breaking stories. They aren’t uncovering wrongdoing. They certainly are not comforting the afflicted or afflicting the comfortable. They are the ruling caste’s janitors.  They are drones, thralls to their elite masters, marching in grim conformity in step to the official narrative, never complaining, never questioning, never dissenting. These are licensed, registered, regime journalists.

They all came from the same kind of deep blue enclaves that imagine that the Monkees weren’t singing about them in “Pleasant Valley Sunday,” except theirs had Volvos and Teslas instead of charcoal burning everywhere. They all got stamped out of the same molds at the Ivy League conformity factories, emerging clutching their meaningless credentials. They all wrote for some dopey blog like Vox, with daddy subsidizing their Brooklyn apartment, then got on a “real” paper or network. Now they are ready to reinforce the status quo that gives them their nearly meaningless meaning. Every single one of them is interchangeable, identical in their tiresome mediocrity, with each seeking to distinguish themselves from their competition by being the sloppiest tongue-bather of the narrative du jour.

They sure as hell aren’t going to defenestrate all their years of desperate striving by asking President Asterisk anything harder than what’s his favorite flavor at Baskin-Robbins. They’ve got a desiccated old zombie staggering about just one “Boo!” away from wetting himself and not one of them is willing to point out that he’s so senile he makes second-term Ronald Reagan look like Charles van Doren.

And they tell themselves that they are heroes, brave firefighters, courageous truthtellers. Yeah, whatever gets you through the night, Deadwood R. Murrow.

Oh, the power of self-delusion. They are a punchline for a joke that’s not funny, and they know it. But they accept that they are worms destined to squirm under the heels of their Raggedy Anne-esque dominatrix. Perhaps it makes it easier when they choose to savor the pain of their own humiliation instead of rejecting being pawns and serfs like normal people. After all, standing up is hard. There are consequences. You can’t be one of the cool kids anymore. You lose your standing – look at Glenn Greenwald or Bari Weiss. Their heresy – their honesty – has set them apart. It’s made them pariahs. And now it seems like they have no friends. But they do have their dignity.

And that’s better by a mile.

Conservatives Must Stand Together and Fight. Join Townhall VIP. And Check Out Last Week's Stream of Kurtiousness, I Hate American Women's Soccer.

IT HAS BEEN UNLEASHED! My sixth Kelly Turnbull conservative action thriller, The Split, is a bestseller. Check it out along with Crisis and my other four novels about what happens when America splits into red and blue countries, People's Republic, Indian Country, Wildfire, and Collapse!