Kurt Schlichter
|
Posted: Jun 17, 2021 12:01 AM
Share   Tweet
The opinions expressed by columnists are their own and do not necessarily represent the views of Townhall.com. 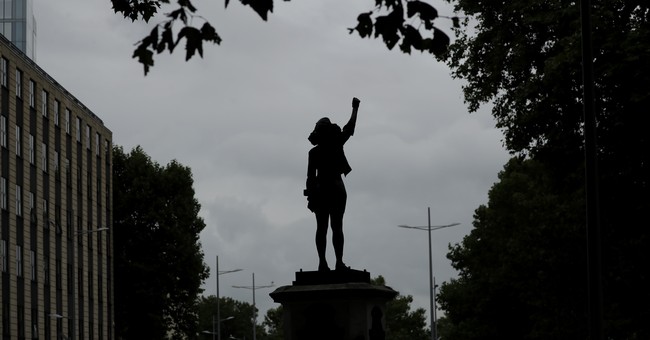 Do you smell their fear rising over the competing reeks of Prius new car smell, of kale, and of the armies of shambling, squatting hoboes that have come to symbolize modern liberalism? That eau d’ uh-oh is the scent of progressives realizing that maybe pushing an ideology that tells the majority of America “You stink!” is not going to lead to the sweet smell of success.

Everyone hates CRT, critical race theory, that bizarre, ridiculous, and morally illiterate hodge-podge of Marxist mumbo-jumbo blended with a healthy dose of the kind of racial hash that would make Democrat David Duke beam. Even the lib wine moms, who were so ecstatic about the recent lack of mean tweeting – ironic that the only man able to give them pleasure was Donald Trump, and he does it by not doing anything – despise this Marxist pestilence. The guys in the campaign business I talk to are giddy and often burst into spontaneous jigs of pure glee at the poll numbers they are seeing. Hey Congress, congratulations! Thanks to CRT, there’s something America hates even more than you!

Normal America is fighting back – on social media, at school board meetings, in the states, and even in Congress. People are sick of this crap, and its purveyors are baffled. They thought enlisting in the cultural lynch mob was going to get them nothing but kudos and it’s not working out that way. Even the mighty are taking hits. Secretary of Defense That Guy from Raytheon took a break from losing wars to testify before the Senate the other day only to lose there too. Former Army guy Tom Cotton read him some snippets of the works of Henry Rogers, who ridiculous people call “Ibram X. Kendi.” Ibby, as his friends probably call him, is one of the brightest lights of race hustling, which is the world’s lowest bar. The SecDef was forced to repudiate George Wallace Kendi’s position of “discrimination now, discrimination tomorrow, discrimination forever,” and then he tried to wiggle out of Cotton’s net by denying that he had even read Kendi’s slim – if not physically, then intellectually and morally – tome. Which was super-awkward because the war-losing, ship-colliding, zampolits of the brass have been ostentatiously putting this noxious trash on military reading lists. You might want to know what the hell you are teaching young officers, one would think, but then I would also think our military ought to be fixated on victory instead of declaring war on the weather and on trying to out-do the faculty lounge at Oberlin in the PC arms race.

So, clearly not everyone hates CRT. Jerks like it, and there are several flavors of jerks. There are the go-along, get-along saps in the military, academia, Hollywood, and the corporations who push it because they know their masters want them to push it. The Democrats love it, or at least thought they did before people started learning about it and the polls plunged. Naturally, the gimp media is in 100 percent because CRT is the Official Narrative, and the media’s job is to pimp the official narrative.

Speaking of pasty submissives who take a Toobinian delight in their own humiliation, the Never Trump sissies of Cruise Ship Conservatism have anchors aweighed-in on CRT too. Apparently, True Conservatism™ not only requires that we don’t fight back against CRT but that we actively run interference for it. What would William F. Buckley do? Apparently, apologize for his privilege and commit to doing the work of tearing down the cis-patriarchal paradigm whilst standing athwart history, tearfully confessing, “I am complicit.”

So, their backlash to our backlash has begun. You have the blue check chuckleheads doing it, the media morons doing it, and, naturally, the David French connection doing it because of course the unread Birkenstock-lickers of Team Ahoy would flack for the left. The problem is not CRT; the problem is normal people rejecting CRT and therefore, the elite who invites these pipsqueaks onto MSNBCNN where they, for a sweet, shining moment, get to pretend that they are back in 2005 when people with influence took their calls.

If you are looking for coherence in their pathetic bleating about America’s rejection of their garbage race fantasies, keep looking. One of their favorite flexes is to try to seize on things we Americans like and that they don’t, such as freedom of speech, to convince us to submit. So, we are treated to the spectacle of super-serious and concerned protectors of Muh Democracy bewailing the terrible attack on freedom of speech that is our refusal to allow unionized teachers and unelected bureaucrats to indoctrinate our kids with their bigoted balderdash. Let’s unpack this notion a bit, not that it matters because they aren’t serious people. Stay with me here. Something has to be taught in schools. And that means someone has to decide what that is. And CRT shills contend that the right to decide what that is belongs to…uh, wait a sec. Unionized teachers and unelected bureaucrats, and not American citizens? What ever happened to Muh Democracy?

Next is the argument that CRT is too complex and subtle for our little minds to comprehend. Well, leaving aside the question of why we would want to teach such advanced concepts to little kids, let’s explore the idea that we’re only attacking CRT because we don’t understand CRT. Does that mean CRT does not hold the position that America is a bastion of white supremacy, that all white people are racist, and non-white people can’t be racist? Because if that’s not CRT, a bunch of people are teaching not-CRT and calling it “CRT.” Why don’t you pinkos get your story straight and get back to us on what CRT is – in the meantime, we’ll stick to teaching kids how to read and count and love their country.

But, to be honest, when you do get back to us, we’re still going to tell you to go Toobin Zoom yourselves.

We conservatives should actually be glad about the left’s CRT fetish. After all, these dummies have handed us a giant Louisville Slugger to use to pummel them. The best part is that they are surprised we’re upset. Maybe they should get out more. Maybe they should meet some normal people. And it’s not just normal people of pallor who are on their last nerve. It’s all sorts of normal people - black, white, yellow, brown, whatever, united in their refusal to hate their neighbors in order to provide a short-term political edge to a pack of elite fools and scammers. It’s not merely that normal people understand that Balkanization leads to the Balkans, and that the Balkans are not a role model (I was there – trust me, you do not want a society where ethnicity is everything). It’s that normal people know that this is evil, that to judge one by the color of his skin instead of the content of his character is un-American and un-Judeo-Christian, and probably un-every other religion except Marxism.

I’d be ashamed that some in our society were drawn toward the siren song of bigotry if I wasn’t so proud of my countrymen for so overwhelmingly rejecting hate in favor of truth, liberty, and Americanism.

How does this end? Better hope it’s not like in my best-selling Kelly Turnbull action thrillers about what happens when America splits into red and blue countries, People's Republic, Indian Country, Wildfire, Collapse, and Crisis! Number 6, The Split, is set to drop soon! Check ‘em out!