Are Leftists Stupid Or Liars?

Kurt Schlichter
|
Posted: Apr 05, 2021 12:01 AM
Share   Tweet
The opinions expressed by columnists are their own and do not necessarily represent the views of Townhall.com. 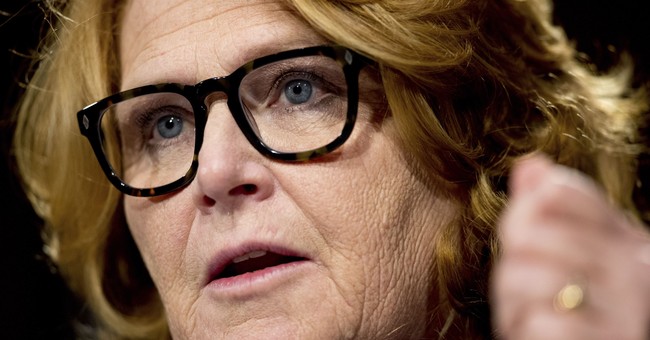 Take Heidi Heitkamp – and you can take her since she’s not busy, the people of one of the Dakotas having fired her for being a crappy senator. This has-been was on with Bill Maher – his show is where C-list pols go to die – and they were talking about cancel culture and what happened next was illustrative. See, Heitkamp was supposed to be one of those moderate Dems from the Midwest, not some strange-o channeling the table talk in the faculty lounge at Gumbo State. And this alleged moderate then announced that Gina Carano is a Nazi.

Carano’s the MMA lady who was on that stupid kid’s space show playing a character named Puun Xeeeblefrok or some dumb thing. She got kicked off it by Disney because she would not genuflect to the various demigods of the pinko pantheon and probably fails to accept that men can menstruate. Now she’s working with Ben Shapiro’s outfit. I’m sure Ben will be shocked to know that he’s working with a Nazi; frankly, it seems off brand for both of them, but leftists are smart, right?

No. They are dumb, or they are liars who imagine we might fall for it. There’s not another option except some combo of the two. Just look at the Politico guy working hard to get us to buy, right before ignoring the latest leftist cop killer completely, the notion that Farrakhan is a Trump guy.

Is he stupid, or does he think we are?

Let’s explore the slander part further, but first let me explain why you can’t sue over this. Actually, you can – anyone can sue for anything with a printer and a filing fee – but you won’t win. To defame someone, you essentially have to assert factual allegations as opposed to mere opinion (let’s not even go down the New York Times v. Sullivan rathole of “actual malice” and “public figures”), and claims like “She’s a Nazi!” have been so degraded they are essentially meaningless. No one sane actually that Gina Carano is a member of the National Socialist Worker’s Party, or that she bears a swastika tramp stamp, or that she has the remotest shred of sympathy for actual Nazis. So, no one, at least no one reasonable (which is the operative word), thinks it’s a factual statement. The same with Heitkamp’s backtrack – even Maher thought she was being ridiculous – to accusing Carano of merely cavorting with “white supremacists.” No one thinks that’s a statement of fact either – the left had defined these deviancies down into essential meaninglessness. When videos of black thugs beating up Asians get chalked up by SJWs to “white supremacy,” the term has lost all meaning.

And Heitkamp clearly knows it too, putting her in the “liar” camp. Watch her as she labels Carano a Nazi, then starts giggling like the world’s crustiest schoolgirl. She knows it’s all crap, but she gets off on the trained seals in the audience slapping their fins for her so she tosses them a fish.

But this phenomenon of labeling opponents with vile smears either because the smearers are stupid, or think we are, is more sinister than just another aging political bit player looking for props to remind her of what it was like back when she sort of mattered. This is a symptom of our gooey establishment totally rejecting the notion of reason and argument – because they can’t prevail using them – in favor of crude lies about the opposition. Unless they are stupid – which some are – they know it’s a lie, and some of their audience does too, and neither care. The act of lying becomes a shared ritual of solidarity between them, substituting a perverted faith in their socialist dogma for facts and evidence. It’s a relief for them to abandon reason – after all, it’s hard work defending an ideology that butchered 100 million people over the last century.

But then there are the stupid people, the unreasonable ones who actually believe this bullSchiff. Some of the idiots are the tellers, other idiots are the told. Out there, somewhere, are people nodding their empty heads thinking, “Yes, Gina Carano is a Nazi because the cackling crone on the TV said so.” They believe it, because they are stupid. The law discounts that they believe it since believing it is so transcendently stupid – the law is always focused on what a “reasonable man” would think or do – so these mouth-breathers’ delusions do not render silly claims like this actionable under law.

Unfortunately, the stupid people who believe garbage like the trash talked by Heitkamp take action out on baseball diamonds. If you keep calling people who disagree with you politically “Nazis,” even if it’s with a wink, nod, and titter, to the good seats that it’s all performative baloney, some of the dullards in the cheap seats are going to buy it. And even the ones who know it’s crap are going to get dragged along with the twisted logic of it.

If your political opponents are not merely wrong but evil, and not merely evil but literally Hitler, then that sort of compels drastic measures. When your catspaws like Antifa or BLM attacks them and hurts them, well, they’re Nazis, right? And when they kill your opponents, well, too bad for the Nazis who are nothing of the sort.

But the problem is that the status quo cannot remain static – the idea that the victims of this gross slander and the resulting hatred, oppression, and violence will not react is absurd. And the thing is, the pampered clowns like Heitkamp are the least prepared to deal with a paradigm where violence supplants reason. It’s probably a bad idea to normalize hate when your forces consist of gender studies students, diversity consultants, and failed senators, plus maybe some blue falcon cops and soldiers who put pensions first. Meanwhile, the fuse the morons/liars lit burns down toward the powder.

But they keep it up anyway. This makes them both stupid and liars.

With a sixth Kelly Turnbull conservative action novel coming, catch up with People's Republic and my four other novels about what happens when America splits into red and blue countries, Indian Country, Wildfire, Collapse and  Crisis.