Not Voting for the Republican Senate Candidates in Georgia Is Stupid

Kurt Schlichter
|
Posted: Dec 07, 2020 12:01 AM
Share   Tweet
The opinions expressed by columnists are their own and do not necessarily represent the views of Townhall.com. 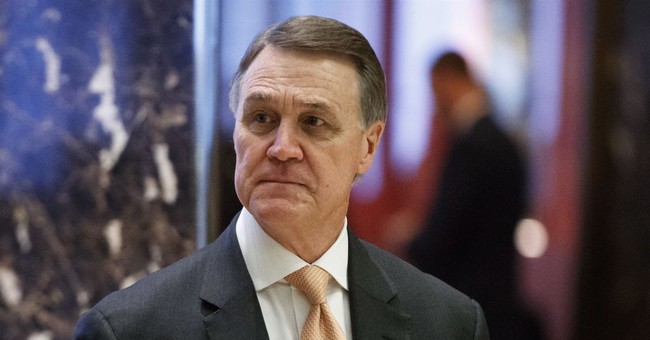 Let’s not beat around the bush – the idea that somehow it’s a genius, 5-D chess strategy to punish the Democrats for cheating in the last election by handing them the next election (and the Senate) by boycotting the Georgia run-offs is so transcendently dumb that it’s awe-inspiring. It’s really remarkable not only in how absolutely idiotic it is, but how it also manages to combine substantive foolishness with doing exactly what the liberals want done.

Yeah, I get that the last election was so riddled with irregularities that it will be a lasting stain upon our history. I worked for the president in Nevada – you don’t need to tell me because I was there (until I caught COVID). But the idea that we protest this injustice by allowing a bunch of communists to steal the Senate is a bridge of stupidity too far.

To those of you with any common sense, this rant is not aimed at you. You get it. You understand that we don’t always win, and sometimes it’s unfair. You understand that like any large group of individuals, some people in the GOP will disappoint us and will sometimes make us mad. You understand that despite its myriad failings (which readers of my columns have heard plenty about), the GOP has managed to stop most (though not all) of the obnoxious establishment initiatives intended to turn us into serfs. And you understand that the answer to a setback is a counter-attack, except against the enemy instead of our own side.

But to those of you who are pushing this notion, you’re being stupid and you need to stop.

Fortunately, I don’t think there are that many of the shoot-your-own-foot clique out there. You see a few on Twitter, but they are greatly outnumbered by people saying “Of course we vote for our own side – duh!” The proponents you see are often clearly liberal bots assuming we are dumb enough to fall for their scam, and many of the genuine dummies are not even from the Peach Tree state. As for the high-profile people pushing this idea, some have backed-off, and you have to wonder if the few alleged conservatives still backing this idiocy are motivated by greed, malice, or free-falling IQs.

If you are boycott-curious, let me be clear: I don’t care if you are frustrated or upset. Not at all. Grow up. Man up. And win this run-off outside the margin of fraud. I am so tired of the teenage daughters of the conservative movement shouting “It’s so unfair!’ and slamming their bedroom doors and writing bad poetry about their feelz in their dream journals while listening to My Chemical Romance.

Your feelings mean nothing. All there is is winning.

“But we can’t win because of krakens and the CIA raids in Stuttgart, like some washed-up retired major said, and it’s got to be true because @MAGAJesus2587, who has prayer and flag emojis in his bio, tweeted it and he said we should write in Trump’s name because reasons and that’ll show those RINOs!”

Well, @MAGAJesus2587 is actually a gender studies major with a nose ring from Connecticut named Kaden who is laughing at you for buying into this nonsense.

He – okay, I’m assuming its gender – is laughing at you.

And xe should, because if you buy his crap you are a sap.

And if you are too stupid to learn my bio before you run your pie-hole, you are too dumb for me to talk to and you should stop reading my column now and go check out the folks who are more your speed at PatriotMAGATruthAndStuff.com, which will explain that if only the GOP would order the Grand Marshal of the Supreme Court to declare martial law and invoke Executive Order No. 28256-69, then the Delta Force, the Avengers, and the Bay City Rollers will arrest all the traitors, send them to Gitmo, and declare Trump Emperor For Life.

I am so tired of stupidity. Here’s some steamin’ hot truth, and anyone who doesn’t like it, well, too bad:

Election contests are largely about mundane and routine shenanigans like failing to verify votes and sending out mass ballots using bad voter lists. And election contests are hard to win for many reasons – short timeframes to build cases, the fact that people hide actual fraud, and the fact any judge will do anything he can to avoid picking the winner of an election. You can be right – and I think Biden likely won via irregularities – and still lose. Welcome to the real world.

But we are not doomed – unless you choose to be dumb. In Georgia, the GOP Senate candidates got more votes than the Dems. They won, just not by enough to win without a run-off. So, the idea that, “Well, they’ll just cheat and we’ll lose” is misguided because they cheated last time and we still beat them. We can win outside the margin of fraud. We just can’t do it if pouting whiners sit home muttering about how they are mad cuz things didn’t go their way last time.

The Murder Turtle Mitch McConnell is already on the job. He knows what happened in November and his minions will be watching in January. His crew of cutthroats are flooding Georgia with lawyers and gathering poll watchers and count observers. Say, there’s a useful way to fight back – instead of whining like a little Mitt, volunteer!

Pick one. And picking neither is picking the Democrat.

Committing ritual suicide is not going to teach the GOP anything, except that if we do it then we will be teaching everyone that we really are as dumb as the liberals think we are.

What’s not stupid is getting the conservative you like or the liberal who needs to cry my Kelly Turnbull conservative action novels People's Republic, Indian Country, Wildfire, Collapse, and my latest bestseller, Crisis. Bill Kristol called my books “appalling,” and a better endorsement I could not ask for.