What Rush Means To Us, And To Me

Kurt Schlichter
|
Posted: Feb 04, 2020 11:15 AM
Share   Tweet
The opinions expressed by columnists are their own and do not necessarily represent the views of Townhall.com. 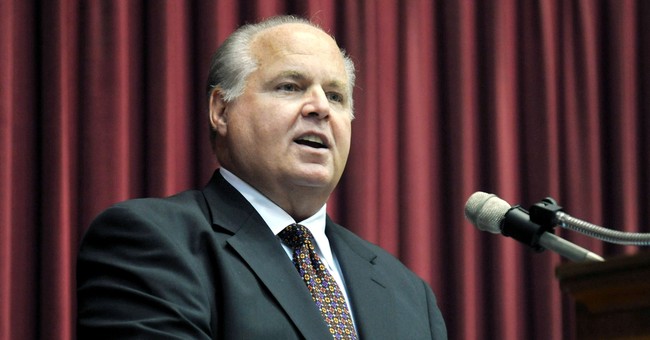 Editor's Note: Did you know, on Wednesday mornings, there's a BONUS KURT column that he writes just for VIP members?

It’s a tribute to the great Rush Limbaugh that the reaction to his cancer diagnosis by the tens of millions of people he inspired was not to be devastated but to focus and to resolutely offer their thoughts and prayers in his fight. And he will fight – he’ll fight this like he has fought everything and everyone else that tried to take him out over the last third of a century. He is the archetypal conservative brawler, a no-apologies, no-excuses conservative who never submitted, never allowed himself to be domesticated and neutered by the elite. At the same time, he is gracious and a charity juggernaut. We love him for his strength and wit, and the left – to judge by its vicious, hateful glee over the news – has never forgiven him for either.

But then, the glory of Rush is that he doesn’t ask to be forgiven.

Here’s how I learned about Rush. I was back from the Gulf War in mid-1991, out of the Army and staying with my parents for a few weeks before I went to LA to start law school. One day, a guy I grew up with who lived across the street told me, “You gotta hear this Rush guy!”

That’s when this all began for me. Sure, I was conservative already, but I was kind of on my own. Lots of us were – millions of us thought we were the only ones who thought like we did. Back then, being a conservative meant you waited for the National Review and maybe the American Spectator to show up in your mailbox. That was it. That was the whole conservative media. You social media cons are spoiled. We were the conservative diaspora.

And conservatism was still nice. Nice worked for Ronald Reagan, but he had a spine of steel. Nice did not work for George H.W. Bush. He would dive bomb a Japanese destroyer and send me and half a million others off to war, but get into an undignified political brawl? Oh well, I never! He got pummeled.

But Rush was not interested in submission. He was interested in conservatism, raw and undiluted. And he gathered us together and demonstrated that we were not alone.

For me, Rush was preaching to the choir, but then the choir needs preaching to too. Yet, his most vital function is to create new conservatives out of mushy libs who were that way purely out of habit. I can’t count how many other conservatives I’ve met who were liberal until they heard Rush. The lies the liberals told about him were often the first liberal lies these converts noticed – they tuned in expecting a monster and got a good natured, funny but uncompromising conservative who won millions of people over through the power of the common sense of his message. People wondered that if liberals were lying to them about Rush, what else were they lying about?

My friend Andrew Breitbart, the other great non-governmental conservative visionary of the last 50 years, wrote about how he was converted and inspired by Rush. That’s the importance of Rush to our movement – he generates conservatives out of liberals and moderates, all by talking to them like they are adults.

But while freedom and the Constitution sell themselves, don’t underestimate Rush’s technical skills as an entertainer. Today, I occasionally substitute for incredible radio hosts like Hugh Hewitt and Larry O’Connor – every conservative host traces his lineage to Rush. And doing that job gives you an appreciation of what it takes and what Rush does. You stare at that mic looming in front of your face and realize you have 11 minutes until the next hard break to fill with coherent thoughts that will keep hands off that dial. But Rush has done that for decades, making it look easy (it’s not) and without the crutch of guests. It’s all him.

There has never been anyone like him on radio, and never will be again. But there will be many who were mentored by him whether Rush knew them or not.

People say there would be no Trump without Rush, but it’s more than that. There would be no conservatism without him. Our movement could have been strangled in the cradle, but Rush nurtured and grew it off in what had been the abandoned wasteland of AM radio where the smart set never bothered to venture.

He started in the three-network era and singlehandedly busted that liberal monopoly on discourse. Rush ignored the gatekeepers and simply tore down the whole gate. Oh, they tried to stop him. They tried to force him off the air, because they feared the unstoppable combination of unparalleled talent promoting the ideology of human freedom backed with the courage to never quit. He could have walked away years ago. He could have taken his money and retired. But he’s there, every day, working in the cause of freedom.

How they hate him. His announcement was met by determination and faith from his friends and vile delight by his enemies on the left. Did you see a single major Democrat take to social media to wish him well? Keep that in mind when they invite you to disarm.

Remember, they hate Rush not for anything he did, but simply for articulating American freedom effectively and without equivocation. They want him to die, literally, because they disagree with what he thinks, so how do you think they feel about you? Again, consider that the next time a Democrat tells you to give up your guns.

I think back on the countless hours I spent with Rush in my car and smile. It seems like he’s always been there, a voice of sanity during the Clinton years, the Bush 43 years, Obama years, and the Trump era. He’s been there pretty much my whole adult life. A lot of you younger cons never knew a time before Rush. He was always there when you turned on the radio, doing his unique thing, not part of any other network or organization, entirely sui generis.

And though I never met him, he’s been amazingly gracious to me. Every once in a while, my phone will go nuts, and I know the great Rush Limbaugh has read one of my Townhall columns on the air again, and no doubt mispronounced my last name!

Rush, you can pronounce “Schlichter” any way you please. If not for you, I probably would not be a columnist, or an author, or an occasional radio host. Thank you.