Kurt Schlichter
|
Posted: Mar 14, 2019 12:01 AM
Share   Tweet
The opinions expressed by columnists are their own and do not necessarily represent the views of Townhall.com. 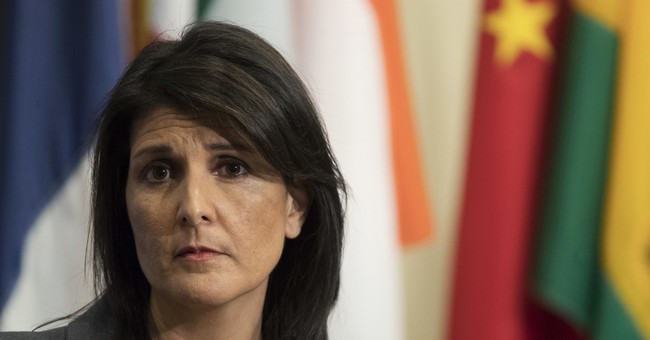 Nikki Haley should already be running away with the 2024 GOP nomination as the fresh face of post-Trump conservatism, but instead it looks like she’s falling for the same sucker siren song of the establishment that, over the last few decades, has made failures out of so many promising Republicans, as well as out of Jeb!. If she keeps going the way she’s been going, she’s going to lose this race before it even starts. Sure, the establishment digs her, but can she turn it around and earn the support of actual GOP voters? Yes…if she ditches the GOPe hacks and gets woke.

I don’t know if she can do it, but I hope she can. I want to back her. She’s got incredible promise. On paper, she’s great. She was a successful governor. Her personal story of immigrant success and military family service is compelling. She was fantastic as UN Ambassador, though you could see by the way she carefully distanced herself from some of the President’s more lib-alarming moves that she was not all-in on the populist revolt that has won over the base. There’s something establishment-curious about her. She seems…caught up in the (for now) favorable media. She seems…willing to buy into the GOPe world view on issues like immigration and trade. She seems…unwilling or unable to engage or enlist the base. Instead, when we hear about her, it’s in tone deaf contexts like a smiley post-panel photo with John Freakin’ Brennan.

That’s lying CIA-to-CNN creep John Brennan, who helped manufacture the soft coup that’s been hamstringing conservative progress for the last two years. He’s not a friend. He’s not even an opponent. He’s an enemy, and when you take a giggly picture with him, we in the base see it as a gesture of the same kind of ruling class solidarity that has led to our consistent betrayal by putative members of our own party over the last three decades.

Nikki and I had a Twitter exchange over it on February 17, 2019. I was distinctly unimpressed, which bummed me out because I want to support her.

She tweeted: “Great policy discussion on the future of our country with @CondoleezzaRice, @JohnBrennan, and Gen. Martin Dempsey, at the NBA All Stars @NBAAllStar Newsmakers Breakfast. Thank you Commissioner Adam Silver for all of the good work the @NBA continues to do!”

Seeing her grinning next to that monster who has been trying to toss out the president we elected since the moment Felonia Milhous von Pantsuit lost, I tweeted: “Really @NikkiHaley? Really?”

She responded: “I can’t control who I sit on a panel with. I can control how I communicate America’s strengths and our path forward. That is what I did.”

Ugh. Let’s leave aside the nonsense about the alleged inability to control one’s own panels. Her substantive response is just DC pablum. “Communicate America’s strengths and our path forward?” Who talks like that? Stop it. STOP IT!

The hacks around you will insist it’s just a photo. It’s not. It’s a message. What message are you sending the base chillin’ with Perjury Boy? “Hi Base. I’m going to pal around with the people trying to shaft you.”

This is a poor message for a GOP contender.

Read the comments to your tweet. The people whose votes you need hated it. Your minions will tell you “Way to go.” Your minions are wrong. Here’s a test. If the Fredocons tell you something is a good idea, do the opposite.

You can be pals with the likes of Brennan, or with us. Not both. Choose. But here’s something to think about. We might vote for you, if you earn it. The Brennans of the world, their fake smiles and phony hugs at your fancy gatherings aside, absolutely will slide a stiletto into your back the second that you become a threat to their power. So choose. It’s us or them.

Remember how on March 11th, the left tried to take down our guy Tucker Carlson? Want to know what Nikki’s only tweet was on March 11?

Look, I’m sure everyone loves the Wofford Terriers, but who the hell cares? The fight that day was to defend a vital conservative voice who was under attack by the liberal media with help from the Ahoy Division collaborators and you, Nikki Haley, were AWOL.

Hey Nikki – let me offer some advice your lame consultants won’t. Don’t do things that make your base believe that you care more about being a member of the DC cool kids clique than about us. We’ve seen that happen over and over again, and if that’s the impression you set, you will lose our votes in the primaries. And then you will lose the nomination. In fact, a lot of the base is already deeply suspicious of you as yet another establishment squish who will sell us out on guns, endless wars, open borders and the climate change scam.

Maybe they are wrong. Maybe they have a mistaken understanding of your intentions. Maybe you are a hardcore conservative in disguise. And maybe taking pictures with leftwing treason-mongers is not the best way to reassure them.

You need to get woke to the reality that there is an existential struggle underway. The other side seeks not merely its turn back in temporary power but domination over Normal Americans forever. Look at what the base you need is experiencing. Illegal immigration is killing us, literally, and changing our society into something we never voted for. Look at the towns ravaged by opioids, another consequence of open borders. Our culture and values are under constant attack by a media elite that hates us and tech monopolies that seek to silence us. The Democrats are talking about taking our cars and cheeseburgers.

What the hell do you intend to do about that?

You can go along and get along and get rolled like that sad sack loser Jeb!, or you can fight like Donald Trump has. But watch out, because the establishment is going to seek to seduce you to embrace the low-energy vibe, telling you “Americans really want a return to bipartisan hugging where Republicans protest a little before signing on to whatever the progressives demand.” That’s a lie. We want a fighter. We don’t want another Mitt or McCain offering the promise of efficiently managed defeat and decline. We want to win our country back from these Jew-hating, gun-grabbing, climate-scamming, anti-Christian socialist freaks who want to Venezuelaize us once and for all.

But why listen to me? After all, you are surrounded by the best and the brightest minds of the GOP establishment, and if anyone knows about winning it’s that pack of geniuses. Us folks in the base, we just don’t get it. We don’t see the big picture. Frankly, we’re a little dumb, and we need the guidance of our betters, the mandarins in the DC ruling class with the understanding of what us peasants really need. That’s what Jeb! thought, and now he’s a punchline.

You, however, could be president. But you have got to get woke.

Step one is ditching the establishment, at least for a while. Yeah, it’s got to be fun to be fussed over and feted and seated on prestigious panels. But it’s a grift, a con designed to co-opt you from the common sense that led you to connect with real people in a real state like South Carolina. Understand that we are interviewing to hire someone to carry on the fight after Trump is gone. We are not looking for a Trump clone (there will never be another Trump), but someone who similarly instinctively understands the nature of our enemies and who has a burning desire to defeat them.

You need to nail down the base, and then you can start cavorting with the establishment again –this time not as their protégé but as their master. You must break them to your will, not let them break you.

And you need people around you to tell you when you have screwed up. Many pols don’t – they have plenty of sycophants but no command sergeant major. Your husband was military, another cool thing about you. He can explain the role of the CSM – to shut the door and tell you that you are wrong and need to get squared away. No, Trump probably has no one in that role, but he’s the exception. Do you think McCain or Mitt did either? They got crushed. You’ll get crushed if you don’t have people holding you accountable.

You could be president. The base could still support you. But you have got to show us something that you have so far failed to show us – that you know what time it is, that you understand what is going on, and that you get that this is not business as usual politics but an ideological-cultural conflict where our opposites seek our complete subjugation.

This is serious stuff – the next Republican president better understand the stakes. I write about an America split apart into red and blue in my novels People’s Republic, Indian Country and Wildfire, and if we let the libs – or a weakheart “Republican” into the White House, we’ll be lucky if that’s the worst that happens.

If we lose, we stop being free citizens and become neutered serfs. If you don’t see that, don’t bother running. We’ll find someone woke who’s willing to fight for us.