Kurt Schlichter
|
Posted: Dec 03, 2018 12:01 AM
Share   Tweet
The opinions expressed by columnists are their own and do not necessarily represent the views of Townhall.com. 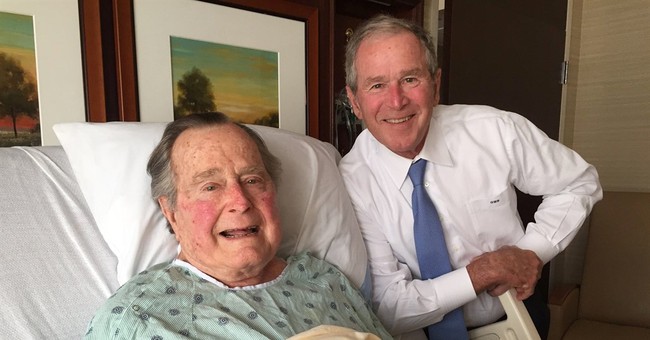 The death of President George H. W. Bush provided liberals and their Fredocon houseboys yet another opportunity to lament the fact that all Republicans aren’t dead. Their feigned amnesia about what libs were saying while Bush 41 was still in the arena, and their latest hack attempt to tsk tsk tsk tsk about how the Bad Orange Man isn’t like [Insert Name of Dead Republican Here] serves to justify the prophylactic cynicism that we Normals should strive to cultivate.

President Bush was an imperfect man and a frustration to hardcore conservatives like me, but he was also a WW II hero and patriot, and he was my Commander-In-Chief when I went to war for the first time. I knew he would stand behind my troops and he did, and the good things I have to say about him on the occasion of his passing are proper and sincere. Patriot, war hero and my commander: that is how I choose to remember him.

The difference is that when conservatives like us focus on his positives, we are not trying to exploit his passing to score cheap points on the present president. Liberals are. They hated Bush 41 with a cold fury. Now, most of the juice box nimrods on social media or piping up on MSNBC were maybe three years old when he was the prezzy, so maybe they don’t remember that the liberals slimed him mercilessly. From the grocery scanner lie to the Willie Horton racism lie, to the wimp lie, it was all lies, all the time. In fact, even today, some libs are off-message and celebrating on Twitter.

Shhhh. You’re supposed to be pretending to revere him!

They did it with John McCain too, through his funeral and its endless sequels. “If only the Republican Party were dominated by a Republican like [Insert Name of Dead Republican Here] instead of that awful, awful Trump!” they sobbed as they shed their crock-adile tears, because it was a crock. There’s never going to be a Republican with a pulse who is not Der Führer reborn. Not McCain. Not Mitt. Not Bush 1.0 or 2.0. And Jeb!, had he become 3.0, would have been Hitler too.

To understand what liberals are doing when they hold up Bush 41 (or any other past Republican) as a model for the GOP’s future, we need to confront his flaws. None of this assessment is intended disrespectfully – his service outshines the things that we conservatives found frustrating. But you cannot understand why the left is seeking to exploit him without understanding why the left prefers him to Trump. Bush 41 was a good guy, and his flaw is that he thought other members of the ruling class were good guys too, which is why he never suspected that that his “friends” were not his friends. He was too deeply imbedded in the elite, too bought-into the establishment.

Bush 41 was an Establishment Republican, and he was therefore deeply suspicious of conservatism. Ideology is scary because sometimes its dictates require you to be Al Cervik at the country club, and that just won’t do. He thought Reagan was slightly nuts and kind of slow, and thought the same about Reagan’s base, that is, us Normal Americans (though his eulogy to Reagan was gracious and moving). He thought people like him should prudently and carefully manage things for the proles and not get all wrapped up in annoying ideas about changing things.

This is why he trusted those in his class over those who elected him. He told us to “Read my lips,” but he never really believed that we expected him to do what he said he would do. That tax promise was Bush 41 playing at Reaganism, but not understanding it. Reagan was serious about this ideology stuff. Reagan’s base was serious about it too. But to Bush 41 it was a pose, something you did for the campaign, and so he held his nose and held the pose, thinking he could just say the stuff Reagan said and get that same support.

The Democrats played him like a fiddle, convincing him to raise taxes because, well, everyone thought raising taxes was the right thing to do. At least, everyone he hung out with in DC and read in the papers. And Bush 41 was stunned to find that the people who elected him were really serious about it. By breaking his word – we cannot sugarcoat it – he prompted the rise of populist Ross Perot, thereby allowing the sordid Clintons into the White House. We’re still dealing with their stench today.

Democrats want Republicans to be more like Bush 41 not because they want war heroes or “truth-tellers” but because they want Republicans who split the base and lose. They want a Republican they can cajole into breaking his campaign promises then crucify him at the next election for doing it. They don’t want someone so gauche and vulgar that he fails to care what the WaPo thinks and who punches back three times as hard. They want a Republican who understands that his job is to try, unsuccessfully, to slow the inevitable and unstoppable spread of progressivism, and to lose that struggle like a gentleman.

My third novel about America after splitting into two countries, one red and one blue, just dropped. Check out Wildfire and see what could happen if we lose this fight to the forces of leftist fascism and half the country becomes one big commie college campus.