Kurt Schlichter
|
Posted: Nov 06, 2018 12:01 AM
Share   Tweet
The opinions expressed by columnists are their own and do not necessarily represent the views of Townhall.com. 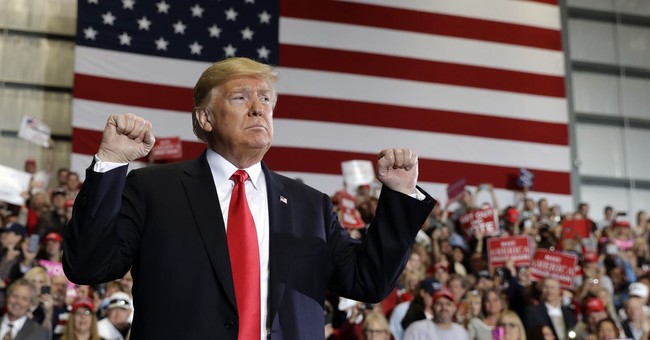 In the Army they call them decision points, key moments in time and space where your choice determines whether you achieve the thrill of victory or the agony of defeat, in this case defeat by a bunch of vicious socialist-wannabes who long for the chance to crush you like one of the grapes that goes into Felonia Milhous von Pantsuit’s Trader Joe’s house brand Chardonnay.

Today, Election Day, is one of those decision points, and what we do today will determine our destiny as a nation. So, no biggie – it’s only our country’s future.

If we don’t win, there’s going to be trouble. Real trouble. So, get out there and win one for the Gipper, or the Trumper, as the case may be.

The simple and horrifying fact is, and it’s hard for the soft folks out there to accept but sometimes the truth is unpleasant, that our leftist opponents despise us. They do not believe that we have a right to participate in our own governance. Given the chance they will govern us accordingly.

See, we’re hopeless monsters. We’re racist, sexist, homophobic, transphobic, every -ist, every -phobic knuckle-dragging Jesus freak gun nuts, the last part of which is good because our guns least provide a Founder’s-approved veto to the kind of terminal endgame you always see when socialists take charge.

To them we’re bad people, morally unfit to have a say and obligated by their bizarre secular theology to submit to the indignities, disrespect, and abuse they heap upon us. That’s what they think. And that’s how they will govern if they win today.

If they take the House, much less (shiver) the Senate, how do you think they are going to act? Nice? Do you think the civility that withered harpy Hillary promised once they are in charge again is going to happen, or do you think they’ll pull out their enemies list and proceed with their (for now) figurative liquidation of their foes?

Do you think you’re going to act in a manner inconsistent with what they manifestly think? As I explain in my new book Militant Normals: How Regular Americans Are Rebelling Against the Elite to Reclaim Our Democracy, given the chance they will rule America like it was an occupied, hostile country – which in many ways, it would be.

Think about the House under the Democrats. It’ll be worse that just having to listen to that bitter old bat endlessly yammering on the news. Bogus investigations will drag on and on. You thought the Russian thing had slunk away in shame? It’ll be back, along with the Saudi thing and the Norwegian thing and the Burkina Faso thing. All sorts of things, all breathlessly reported by the credulous lapdog media, all stupid, all nipping at the President’s heels, trying to trip him up.

Brace yourself for the obstruction of even the most basic policies. Do you think our military will be funded? Do you think our rights will be protected? Yeah right. But stability and justice are sacrifices the leftists are willing to make. The same goes for their Fredocon pals in Never Trump too; a Blue Wave good for the conservaquislings, but a disaster for people who put country over cocktail party.

Sure, there’s a lot Donald Trump to do as the chief executive, but he can’t pass laws. That Barack Obama stuff about a phone and a pen aside, even to the very limited extent governing by order is constitutional there’ll always be some leftist Hawaiian judge to shut it down.

The only bright side is that the Democrat’s coalition of academic parasites, welfare cheats, and corporate jerks are dependent on government handouts, and we can starve these porkers until they squeal and extort the House Dems into grudgingly agreeing to fund our military and law enforcement.

Oh, and even if the Nanster was inclined to stop the impeachment push, do you think her commie caucus would let her? Yeah, it’s a legal, constitutional, and moral joke, but it’s a time consuming one that the media will go into a frenzy over. Anything to hamstring our president.

Would they really risk that it would tear the country apart? Risk? The tearing apart part is a feature, not a bug. Democrats yak about their precious unity and crocodile tear it up about how “Trump is dividing us!” but the fact is that their entire ideology, learned from Hillary’s hero Saul Alinsky, is premised on dividing Americans. And divide is what they’ll do. So what if they reverse our great economy? The military rebuild? The regulatory roll-back? American’s interests are merely collateral damage in their fight for the greater good, which is defined as their greater power. They just want to make sure they get 50% plus one. The rest of us can rot.

And if they win the Senate against all odds? Well, then all bets are off. The administration will get no one confirmed. Not a judge, not a secretary, not a Deputy Assistant Undersecretary of Interpretive Dance at the Department of Commerce. No one.

By the way, I predict +3 Senate seats for the good guys and that the GOP narrowly keeps the House.