Kurt Schlichter
|
Posted: Aug 02, 2018 12:01 AM
Share   Tweet
The opinions expressed by columnists are their own and do not necessarily represent the views of Townhall.com. 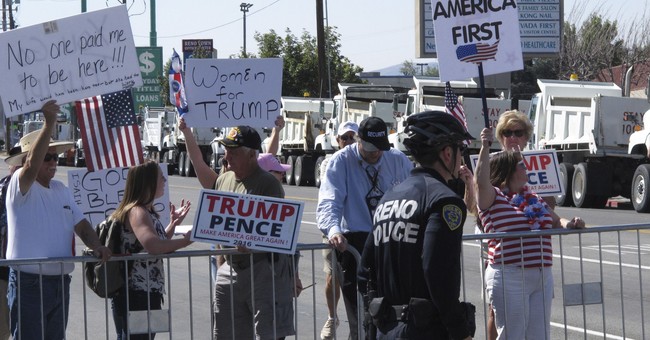 Nikki Haley is not wrong about much, but she was dead wrong when she told a conservative audience that we should not be owning the libs. Wrong, wrong, wrong. We must own the libs. Liberal ownership – the mockery of these pretentious twits, along with their goofy Fredocon enablers – is vital, even essential, to the success of our conservative counterrevolution.

Ambassador Haley (who we cons like) wonders, “I know that it's fun and that it can feel good, but step back and think about what you're accomplishing when you do this – are you persuading anyone?" Except this is not about persuasion anymore. The left has rejected reason in favor of hatred. Only pain will teach them, and if it doesn’t teach them at least it might deter them from messing with us. That’s why all 21st century conservatives have a duty to kick pinko booty.

Look, the ambassador is right that owning liberals is fun. Alinsky Rule No. 6 is: “A good tactic is one your people enjoy.” The struggle for our freedom need not be a grim slog; there is joy to be had from crushing your enemies, seeing them driven before you, and to hear the lamentations of their sissy, male-identifying allies at Vox and Weekly Standard.

In fact, there are few things you can do without first buying someone dinner or opening up a bottle that provide the pure, unadulterated pleasure of breaking the will of some puffed-up liberal nimrod on social media with a clever, cutting, caustic takedown. They make it easy by being pompous, and their wits have grown flabby and weak from being cloistered in the safe spaces of the media and academia where they never, ever have to face someone who thinks they and their ridiculous dogma are full of it.

The same goes for their Never Trump fellow travelers, the same folks who thought Jeb! was the answer and are still mad at you for laughing. These cruise-huckstering anachronisms exist only because CNN needs guests to pretend to be Republicans, and their endless pearl clutching and cries of “Oh, well, I never!” scream out for the Margaret Dumont treatment by us Marxists – Groucho, that is.

You must have a heart of stone not to giggle in delight as you watch them howl with outrage while you crank them over the flames on the Twitter rotisserie.

But owning the libs is more than just delightful. It is absolutely necessary. Why? Morale – that intangible factor, combined with fearless leadership, that means the difference between total defeat and unexpected, legendary victory: Little Round Top, Rourke’s Drift, and yeah, the upcoming midterms.

Owning the libs is a rejection of their dominance and an assertion of our own. It is a way of not only saying, “We will not submit,” but of demonstrating that refusal to others. There is a reason the motto of the infantry is “Follow me,” and not “Uh, you guys go on ahead.”

People are not led to triumph by cowards, by wimps, or by submissive weasels who take heaps of garbage and then explain away their refusal to hit back by sobbing, “We’re better than that!”

People are not better than that. They want to fight back, but for that they must have morale, and morale requires that they need to see others fight back too. And when they don’t, morale collapses, there is a rout, and the bad guys win.

Let’s be clear about who the bad guys are, because in this struggle there are good guys (us) and there are bad guys. The bad guys are the people who outright tell us that they hope to strip away our freedom of speech. They tell us they want to circumscribe our religious practices to the point at which – maybe, if we’re good little boys and girls and non-binary beings – they might let us quietly practice our faith out of sight, maybe. They are the ones who call for us to be disarmed, then also call for us to be exiled from society, hounded, battered, and even murdered. My novels People’s Republic and Indian Country paint a picture of the hellscape they want to create.

Anyone who presumes to lead us and does not believe that we are in the right, that we are the good guys, is unfit to lead us. The bottom line is that we need to defeat the other side, and you don’t do that through moral equivalence, passivity, and submission. Non-owning is a non-starter.

Owning the libs shows that we are free, that we will not submit, and that we have power too. Owning the libs shows allies who are alone, or afraid, or doubtful, that there is a resistance to the leftist tsunami of lies, corruption, and fake outrage. It shows that all hope is not lost, and that someone, somewhere is willing to fight back. It shows our fellow Normals that they can fight back too.

Owning the libs, like our growing demand that our conservative leaders be accountable for winning instead of merely for adopting the right poses out in the sticks around election time, is not the entirety of our agenda. The weak and shiftless who we dislodged from their formal and informal sinecures in Conservative, Inc., when we elected Donald Trump will tell you it is, but like everything else they say, that’s a lie. We know you cannot create a conservative future without a firm ideological foundation based on the principles embodied in the Constitution – civil liberties, truly representative government, and free enterprise. But we also know you cannot make those things a reality if you’re too much of a wuss to get in there and throw a punch, figurative preferably, literally if they come to your softball diamond with a rifle again.

As my upcoming book Militant Normals: How Regular Americans Are Rebelling Against the Elite to Reclaim Our Democracy argues, in colorful language with much liberal ownership – it’s a 288-page festival of lib ownership – normal Americans are sick and tired of being told to be silent, be quiet, and behave.

We tried weakness for eight years with George W. Bush – remember how he was too much of a gentleman to fight back? Remember those Chimpy Bu$Hitlerburton memes we had to defend him against because he didn’t want to get his hands dirty? And remember how he went eight years not defending us during the Obama Regime only to suddenly discover someone he was OK with attacking during the Trump years – us, the same folks who had had his back?

We drew a lesson from that – that not owning the libs really means choosing not to fight for us. We’ll never again pick a leader who won’t give as good – or better – than he gets. When you tell us, “Don’t own the libs,” what we hear is you saying, “Trust us – we got this. Let us handle the other side like gentlemen.” Sorry, we dig you Nikki (not so much some of the other people who decry our lib ownership initiative), but no one gets to tell us to chill anymore. To paraphrase Dirty Dancing, because of course it comes to paraphrasing Dirty Dancing, no one puts normals in the corner.

We’ve got to win this fight ourselves, and if you want to carry our banner down the hill in front of our bayonets, you need to be ready to rumble. Donald Trump may have some faults, but he fights for us – and his track record of conservative success dwarfs that of the Team Gimp gang that is still telling us not to be so feisty.

Well, we’re feisty all right. We’re cocked and locked and ready to rock. That’s why we’re going to do our duty and keep owning the libs – on Twitter, in the bookstores, and at the ballot box in November.