Kurt Schlichter
|
Posted: Feb 13, 2018 12:01 AM
Share   Tweet
The opinions expressed by columnists are their own and do not necessarily represent the views of Townhall.com. 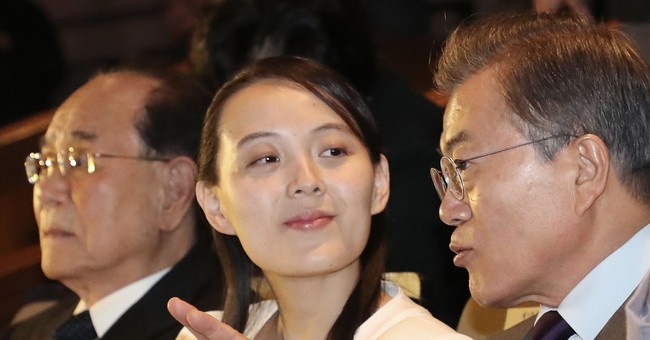 America’s most effective advocate of the principle of an armed populace is now officially the liberal media that usually seeks to do the ruling class’s bidding and strip us Normal Americans of that sacred right. But after the media’s bizarre display of eager tongue-bathing of the semi-human savages who run North Korea, any patriot has got to be thinking, “I best load up, because it’s pretty clear what the establishment’s desired end state is.”

And CNN harassed airport travelers with: “Kim Jong Un's sister is stealing the show at the Winter Olympics.”

Let’s clarify something – this Kim Yo Jong woman, a key leader in a giant death cult that is torturing and killing people at this moment, is not cute, not figuratively and not literally. She’s not even a Pyongyang 6. Maybe at closing time. After a lot of soju.

But besides having bad taste, our mainstream media is revealing our ruling class once again. You watch the non-stop squee over these monsters and the only conclusion you can reasonably draw is that, for our worthless establishment, the North Korea murderocracy is not a cautionary example. It’s an objective.

Just think of it! The ability to simply make all those Normals who disagree with you go away – either for good or by exiling them to rural fun camps. No fuss, no muss, no more tiresome dissent by those banjo-jockies between the coasts!

“What? That’s crazy talk! How could you draw the conclusion from our giddy, giggling media lovefest that we approve of those adorable, wonderful North Koreans?”

Well, that’s fair. Maybe our elite doesn’t really dig the Great Big Leader’s vibe. Maybe our elite is just composed of morons. If the explanation for the media serfs’ tender fondling of these blood-drenched sadists is not a result of our morally illiterate elite’s desire to emulate the insane wickedness of the Juche Idea, then that leaves gross stupidity as the only other option.

Either they want us Normals dead or enslaved, or they are just idiots.

Spoiler: Neither option supports us giving up our guns.

And what makes it even worse is the weird millennial online patois they often use in their constant kiss-upping of Kim Fat Boy’s sister, along the lines of:

Her side-eye at Pence is everything!

Well, she’s got that last one nailed – slaying unarmed civilians is the only thing this dirtbag dynasty is any good at. Regardless, why does the entire millennial generation strive to sound like the sassy black gay best friend of Kate Hudson in every rom-com ever made?

And then there is siding with the North Koreans against our president and vice president. Look, liberals’ fake patriotism in the wake of the humiliating defeat – in an election – of Felonia Milhous von Pantsuit was always grating. But, as predicted, liberals can’t keep up the pretense of siding with America. This stuff about Trump and the Russians, the same Russians who couldn’t sit down during the Cold War without checking to make sure they weren’t going to crush a Democrat’s head, was always a joke. That the liberal establishment thinks worse of Mike Pence than a woman who is literally the head of the Propaganda and Agitation Department for a country that just threatened to nuke the United States says all you need to know about their fake patriotism.

No liberals, I’m not questioning your patriotism. Don’t be silly. I’d never do that. I don’t waste my time questioning unicorns either.

Let’s put this out there. If you are seriously comparing Donald Trump and Mike Pence to Kim Whatever This One Is Named and his cronies, you are an idiot. Now, some portion of those spewing this trash don’t actually believe it; they just lie to get what they want because they think you are stupid and will fall for it. But you are not stupid. Instead, you are going to ensure that you have the means available, in the form of guns and ammunition, to exercise your right to defend our Constitution should people with the kind of pro-fascist mindset we have seen highlighted by the mainstream media ever again regain power and attempt to impose upon us the kind of totalitarian regime that always seems to make them writhe in ecstasy.

You know what North Korea doesn’t have, besides basic freedoms and food? An armed populace. We do. But we have an elite that either thinks North Korea is a role model, or that is too stupid and morally bereft to hold any kind of authority.

Thank our Creator that we live in America, and that our Founders thought, “You know, there’s a chance that really evil and/or stupid people could take over sometime, so let’s figure out a way to make sure that the Normals can fight back. In fact, let’s give it its very own amendment.”

But, in any case, the next time some liberal establishment half-wit starts piping up about how ridiculous it is to think that maybe the citizens of this country might find themselves ruled by tyrants, remember that our elites’ dancing monkeys in the media just showed you that our progressive elite adores and sides with tyrants over the people we elected.

Thank you, you suckers, fellow travelers, and butcher-huggers of the American mainstream media. With the freedom from your fellow leftists’ petty oppressions that we’ve been enjoying under President Trump, we could have been lulled into sleep and forgotten that you literally fetishize a corpse-strewn communist dictatorship. So we must honor the Founders by exercising our right to create facts on the ground, large caliber facts that will keep these people from achieving the dream that their pet press showed us. Despite all its endless commercials, the only products the Olympic coverage should convince you to buy are guns and ammo.