The Establishment Flunkies Flunk Out

Kurt Schlichter
|
Posted: Oct 23, 2017 12:01 AM
Share   Tweet
The opinions expressed by columnists are their own and do not necessarily represent the views of Townhall.com. 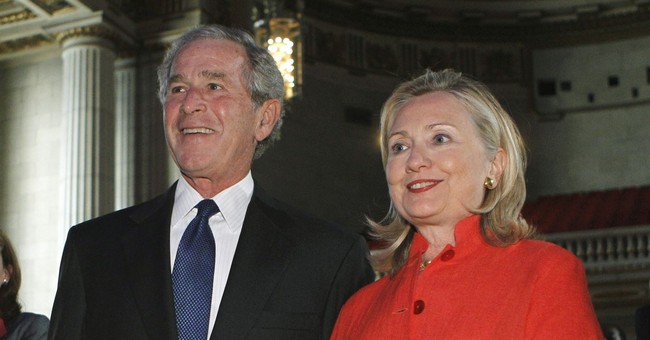 All human institutions are essentially a reboot of high school, and within the political scene the Never Trumpers are convinced that they are the cool kids despite being the chess club of American politics. No, they aren't the cool kids. They’re geeks, they haven't won a tournament in years and, more importantly, they're the freaking chess club.

In contrast, we normals are just that, the members of the student body who have lives and after-school jobs and girlfriends and who don't care about the dorks padding their resume with student body presidencies or, in this case, jobs at the Eagle Liberty Council for Freedom. Except now we normals have been forced to pay attention because the would-be in-crowd has so totally screwed things up that there's no real choice but get involved in campus activities and burn down the whole damn schoolhouse.

Trump is the torch, and the Fredocons in the chess club are panicking because when the school goes up in flames so does their identity. And their meal ticket.

But they brought it on themselves. You can’t get “F” after “F” after “F” without eventually flunking out. What have these guys achieved? The clowns they support in Congress can’t even repeal Obamacare. That’s a total no brainer, and therefore should have been right up their alley.

We normals are sick of being looked down upon and exploited by a bunch of people who, if this was a movie, would be played by James Spader – except trainwreck 2017 James Spader, not louche/suave 1986 James Spader. I guess that makes Bill Kristol the Nepo-Con Duckie, if Duckie was a less-cool, backstabbing deep-state-loving weasel trying to sell Molly Ringwald a cabin on one of his crappy cruises.

In place of trying to earn respect by demonstrating competence, they’ve chosen to try to diss us into submission. George W. Bush decided to go all Mean Girls in a speech that insulted his (former) supporters while delighting the left, and therefore the Never Trumpers. Now, if you read W's speech on paper, every word of it about bigotry being bad is true. But you give speeches in context, and here the context is decades of leftists and their media poodles falsely accusing the normals of racism and bigotry. So when W adopted that language, he also knowingly or negligently adopted that narrative; the former newspaper and current brochure known as the L.A. Times crowed: “In stunning attack, George W. Bush rebukes Trump, suggesting he promotes falsehoods and prejudice.”

And so, of course, the supporters of this Trump guy are therefore….  Well, you get the picture. That is, if you’re not being willfully obtuse, like the Fredocons, who were delighted that Bush decided to break his 16 years of super-principled silence in the face of liberal attacks to slander the very people who had voted for him and defended him. If being “principled” means letting liberals use you like a slit trench then trashing the people who had your back to please the people using you like a slit trench, you can keep your damned principles.

Of course, the chess club came out in fussy force after the speech in response to the pushback against Bush’s cattiness. “Why, you wouldn't be offended unless you were secretly convinced in your heart that you were some kind of racist,” they hissed, because, of course, no one has ever been offended by being falsely accused of something, and never in all of human history has a speaker insulted people without expressly using their name. I wonder if they think this amateur hour gaslighting ever fools anyone – exactly zero people said, “Gosh, even though I’m not a bigot, Bush and his buddies implicitly accusing me of bigotry by adopting that slanderous liberal narrative have convinced me that I should once again trust them as leaders of the conservative movement for some reason.”

This kind of disingenuous crap is why we despise the Fredocons. Like Bush, who has junior clan members he wants the normals to support someday, they won’t come out and trash normals directly. Bush got elected on normals’ votes, and Skippy Bush and Buffy Bush and Thurston Bush III will all need normals’ votes down the road, so he’ll try to get his snippy cheerleader digs in at the guy who humiliated his family without fully burning the bridges. But we’re woke, as the hep kids say, and Conservative, Inc., can’t thread that needle anymore. The problem for them is that we now know where their loyalty really lies – Bush and the rest had a choice between us and their YaleHarvardWherever Skull n’ Bonesey fellow travelers, and the choice was easy. At the end of the day, politics gives way to elitist courtesy, and Bush will sit giggling with Obama and Clinton before he dirties himself by associating with the guy we chose over Sr. Please Clap.

They hold us in contempt, but the thing is, now the student body is paying attention, and we hold the chess club, the student council, the cheerleaders, and all the other little stereotyped suck-ups in contempt right back. And there are a lot more of us.

The establishment has learned nothing. It’s members keep thinking that if they can be just a little more insulting, just a little more condescending, we’ll finally learn our place – which they contend is at their feet, forking over our lunch money. If there is a liberal narrative, the gang of Salon-approved pseudo-cons is going to sign on. So when it's a competition between a true hero like General Kelly and a leftist Democrat who looks like the result of Huggy Bear hooking-up with Ana Navarro, well, word on the street is “They’re with her.”

The chess club cons are just mad that we didn't invite them to the prom. They’re particularly mad at who we crowned prom king. They tried to sabotage it, but no one remembered the pig blood. Instead, they stayed home and watched their new pals on MSNBC, secure in their principles and their virginity.

How do they see this ending? Do they see us somehow coming crawling back to them, begging, “Please, Mr. Kristol, please provide us your guidance! We need you. Now, where do I sign up for a cabin? I heard David Brooks and Bret Stephens will be giving a talk about how the Second Amendment should be repealed out on the lido deck and that they’re serving complimentary Zima and screw-top Chardonnay.”

Do they think once Donald Trump is out of office, either after eight years or less if they manage to pull off some sort of deep-state coup in conjunction with the liberals they prefer to us, that we're just going to quit? Really? Can they truly imagine that Conservative, Inc., gets to start back up again when we come to our senses and get un-woke? Do they think they’ve got a path to victory, where victory is really just our submission to their prissy dictates?

The future with the establishment in charge is turmoil and catastrophe. Hard pass.

So, here's the thing, dorks. You don't get to win. You don't. You're finished. The Republican Party has changed, and it changed because of you. The fact is that people like you, and people like George W. Bush, are some of the biggest reasons we have Donald Trump. You managed to combine unearned self-guard, condescension, corruption, and a total inability to perform even the most basic tasks of governance into one pompous, annoying package. We're done with you, because you suck.

So stop trying to make Never Trump happen. It's not going to happen.