Unleashing the Power of Mockery on Annoying Social Justice Warriors

Kurt Schlichter
|
Posted: Sep 21, 2017 12:01 AM
Share   Tweet
The opinions expressed by columnists are their own and do not necessarily represent the views of Townhall.com. 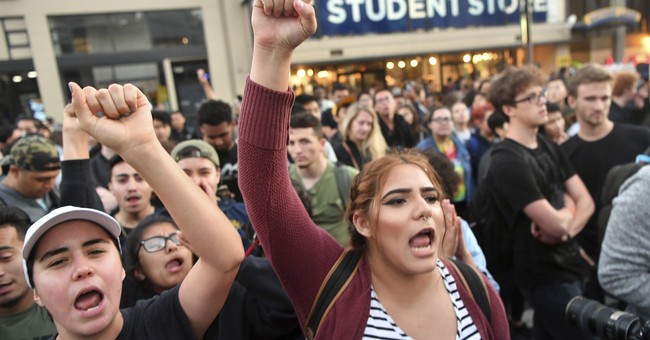 In a culture where humorless leftists scolds seek to impose their rule upon us normals by sucking every drop of joy out of life, it is the conservative smartass who is the true subversive. Don’t look to Hollywood’s allegedly edgy comics to zing the zeitgeist – hacky proggy stand-ups and interchangeable liberal late-night hosts are the opposite of rebels, with their dreadfully generic opinions and lockstep jokes designed to get the herd of trained seals that makes up their fish-breathed audience beating their flippers. No, if you want someone who snarks truth to power instead of speaking consensus coastal truth to the powerless, you gotta step to the right.

And Lisa de Pasquale is one of these conserva-revolutionaries, a young woman who is in equal parts funny and fearless. She has a new book dropping, The Social Justice Warrior Handbook: A Practical Survival Guide for Snowflakes, Millennials, and Generation Z, and it does exactly what today’s embattled conservatives need to do – it goes full bull in the progressive china shop.

Lisa is a friend, and her publisher also published my book Conservative Insurgency, so feel free to exercise your natural and proper suspicion that this is mere logrolling and check out the preview before you fork over your money. As I teach my kids, trust no one (This is a family theme – Judge Mom's advice to me after she swore me into the California Bar was “Everybody lies.”). Felonia von Pantsuit might think the central message of 1984 was “Mindlessly obey the ruling caste,” but the undeniable fact is that our institutions have failed us, and no one presuming to speak from authority deserves your unthinking, reflexive trust. Sarcasm and cynicism are not merely appropriate responses to decades of lies and failure by those posing as our betters; they are torches we can now use to burn down the whole rotten edifice of progressive cultural tyranny.

Lisa is all about the arson. With The SJW Handbook, she turns her flamethrower on that most annoying manifestation of liberalism's intellectual bankruptcy and infatuation with tyranny, the Social Justice Warrior. Lisa sums up their twisted world-view thusly: “Every day we see people driving their cars, going to their jobs, spending time with their friends and families. They are oblivious to how they contribute to the problems in America.”

You need to understand that SJWs are the leads in a giant personal psychodrama they want to suck us all into. But they aren’t traditional heroes – they’re far too goofy. Think of SJWs as the nerds in Revenge of the Nerds, except these nerds aren’t sympathetic fringies. They’re malignant manipulators who act like the jocks and want to make the rest of us as miserably friendless and loveless as they are. Instead of giving their victims wedgies, the babbling bullies of the left want to whine us into submission.

These suburban-born aspiring Red Guards aim to lead their own Cultural Revolution from safe havens within academia and deep in the fetid bowels of the internet, but they'd just be yet another group of hapless leftist losers except that they discovered how to exploit a key vulnerability. They learned they can rely upon the dedication to reason and essential decency of normal people to protect them from what should be the painful consequences of their actions. SJWs succeed for one reason, and one reason only – too few people simply burst into laughter when these mayo-loving white people with dreads and daddy issues announce that today they identify as black, or that prominent Jewish conservatives are “Nazis,” or that some women have penises.

SJWs deserve nothing but contempt and the merciless ridicule that goes with it. Yet, sadly, we Americans are usually reflexively too polite to deliver the verbal beatdowns these dorks deserve. Because we are genuinely nice people, we generally assume that other people are acting in good faith even when what they are saying is manifestly idiotic. We tend to think, “Hmmmm, that sounds really insane, but I should give this person the benefit of the doubt and react in a polite manner when she bursts into tears because, she says, my not accepting that men can menstruate is a hate crime.”

What we should think, and say, is “You’re stupid, so stop talking and finish filling my latte order, weirdo.”

SJWs prey on that default presumption of good faith, knowing that normals will assume SJWs sincerely mean whatever idiocy they spew. But the truth is that all this nonsense about microaggressions and such is just a way to impose their fussy control over us. The remedy, as these Millennial morons might say, is for us normals to “get woke” to the SJW okie-doke, and to recognize that their whole deal is to silence us by socially criminalizing anything we say, do, and believe.

Lisa is having none of their nonsense. A long-time veteran of the conservative movement (for years she organized and ran CPAC, the Woodstock for people who yearn to see Mike Pence up close or watch Ted Cruz do an acoustic set), Lisa gets it. But she also gets life – her book Finding Mr. Righteous was an eye-opening and, at times, agonizingly honest look at a young woman's journey in modern America, specifically the conservative world. She knows how to write about people with a particular identity without making it about that identity, so she's the perfect choice to go after nimrods who are nothing but their chosen identity.

And Lisa gets medieval on them.

The SJW Handbook is just that, a faux guide to how to be a crying, bitter baby demanding that mommy and daddy submit to his, her or xir's increasingly ridiculous commands. And by writing it, Lisa provides a template for us to do what we all need to do all the time – see through their lies and strip them of their power by ruthlessly mocking these proto-fascist geebos until they flee back to their safe spaces.

As Lisa writes, “If you’re new to fighting, your best option is the sucker punch.” The SJWs have brilliantly provoked a battle within the Octagon, except the only weapon allowed is the one they excel at using, whiny words (They would so not dig a real fight on us normals’ terms). Sure, they sometimes throw on masks, gather into groups, and start some actual violence, but that only happens on the rare occasions where they vastly outnumber their opponents and the cops are ordered to retreat. When there’s push-back, they fold. It’s all a pose; they aren’t really about violence beyond trying to score with woke sophomorettes by wearing shirts memorializing Cuban butchers. The SJW’s weapons are words, and they depend on our default courtesy to make us respectfully listen to whatever stupid thing they have to say.

That needs to stop. Lisa’s book is a welcome diss track that should motivate us all to provide the proper response to these campus communists and academic anarchists the next time they start flapping their quinoa holes: “Hey jerks, I got your revolution right here.”